We Like To Watch – May 17th – The Vas Difference 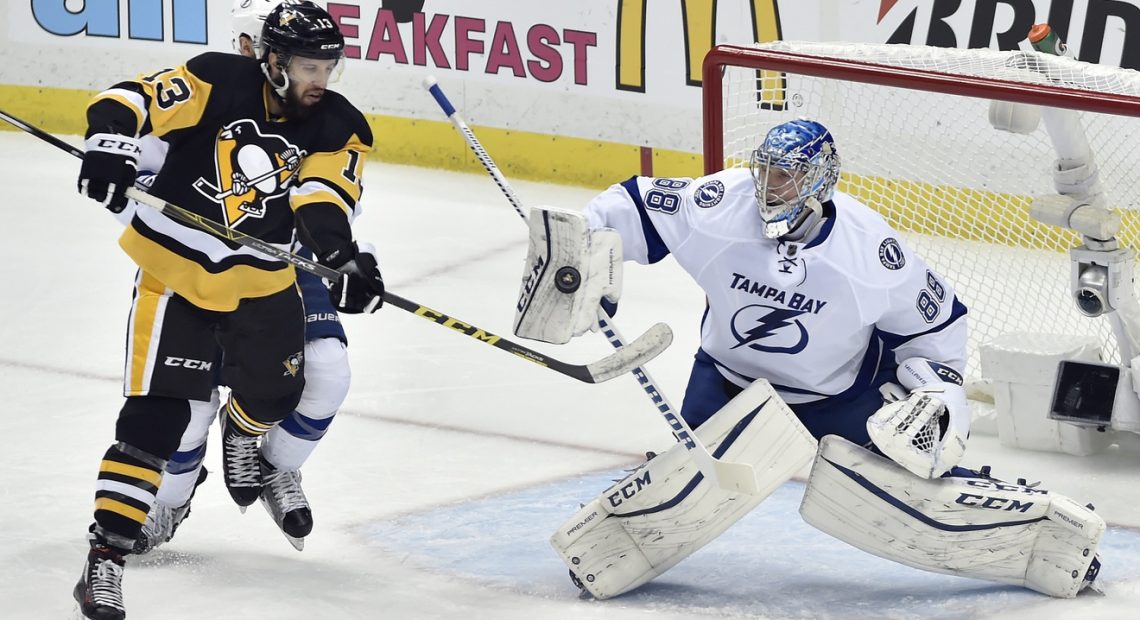 So it took a little bit longer than it looked like it was going to after the the first 10 minutes of the game, but the Penguins salvaged a split at home after Tampa won Game 1. These are two incredibly flawed teams, particularly on their respective blue lines, but the speed and dynamism among their forward corps is what got both within three wins of representing the East. Somehow Pengs coach Mike Sullivan allowed both Justin Schultz and Trevor Daley on the ice together at home in a conference final game, and behind Christ Kunitz (who fell down) no less. Predictably that shift resulted in the second Tampa goal. However, Sidney Crosby ended the OT period forty seconds in after cement mixer face Jeremy Roenick said that he wasn’t working as hard as Jonathan Drouin during the second intermission.

It’s Tampa, though, whose trajectory as a franchise has the potential to be radically altered by the outcome of this (and possibly the next) series. That they’ve gotten this far without Steven Stamkos does speak to their depth at forward, if not how watered down the Eastern Conference is. Given the rumblings earlier in the season about how Stamkos and coach Jon Cooper didn’t see eye to eye, this might be the nail in the coffin to allow him to walk this summer, and he’d be one of the higher profile free agents in the last 10 years. Jonathan Drouin finally showing signs of life now that he’s been put in a position to utilize the skill that made him a #3 overall pick two years ago might also influence this decision, but again, he also had a well-publicized butting of heads with Cooper and Genius GM Steve Yzerman earlier in the year, which makes this start to encroach on a recurring theme. Jon Cooper might be an oily and weird lawyer who makes an uncomfortable amount of eye contact and smiles just a little too wide, and puts off the vibe that he likes to dress recreationally like Ray Winstone in Sexy Beast, but given his success with skill players at the AHL and NHL level, this seems curious. He’s developed The Triplets and made Nikita Kucherov into a 30 goal scorer, so it’s not like he doesn’t know how to work with real skill. It just seems like once again a case of a coach having his guys and making his mind up and refusing to budge unless his hand is absolutely forced. Sound familiar?

But of even more intrigue is the ‘Ning’s netminding situation. They have been high on Andrei Vasilevskiy since they drafted him even in spite of Ben Bishop being a Vezina finalist two of the last three seasons (thanks Cory Conacher). With Bishop once again hurt, approaching 30, and only having one year left on his contract, and Vas performing excellently over the past 100ish minutes of Conference final hockey, it would not be the least bit surprising if he was moved in the off season, as 6’7″ guys who bend over for a living don’t really age well after 30. It could potentially give Genius Yzerman more money to try to keep Stamkos in Tampa, or if that train has already sailed, it could give him money to continue to throw at his tall, slow, bad, and incredibly expensive blue line, because it’s abject shit after Hedman and Stralman as everyone saw last June, and in the cases of Matt Carle and Braydon Coburn, in June of 2010 as well. The Ning have $13.8 million committed to Carle, Coburn, and Jason Garrison through 2018, and Victor Hedman’s $4.0 million first RFA deal is done after next year. And Ryan Callahan is making $5.8 through 2020. But hey, at least Matthias Ohlund’s $3.6 LTIRetirement is finally coming to an end. GENIUS.

With both of these teams specializing in taking away prime chances via coaching mandate, this series could turn into a complete slog should it go the distance. But the Sharks’ forward corps is more dynamic than the Blues as a whole and that more than likely gives them an advantage, as it takes talent to score from less than dangerous areas. But Brian Elliott has yet to fully break, even if he’s threatened to and was saved by a quick whistle in the second period on a long, soft shot he mishandled badly.

The full magnitude of the Sharks’ skill at forward has been on display all post season on their power play, which we have sung the praises of over and over again throughout the years. And in what figures to be such a low-event series, every opportunity on the man advantage is sacred, which is why Peter DeBoer wasted no time in planting the seeds in the officials that the Blues were getting away with clutching and grabbing in an effort to get his superior power play unit more looks. Of course Hitchcock responded in true Blues form saying they weren’t going to whine to get calls, just like Doug Armstrong wasn’t going to “circumvent” the cap to make deadline deals even in spite of their rash of injuries. But it’s probably pretty easy to take a principled stand when a person is as intractable in their respective job position as those two are in spite of years of hilarious futility. Though on a certain level, it would absolutely serve this dumb fuck entitled Hawks fan base right to have to suffer through a Blues Cup win after how everyone has shown their ass for the last 10 months.