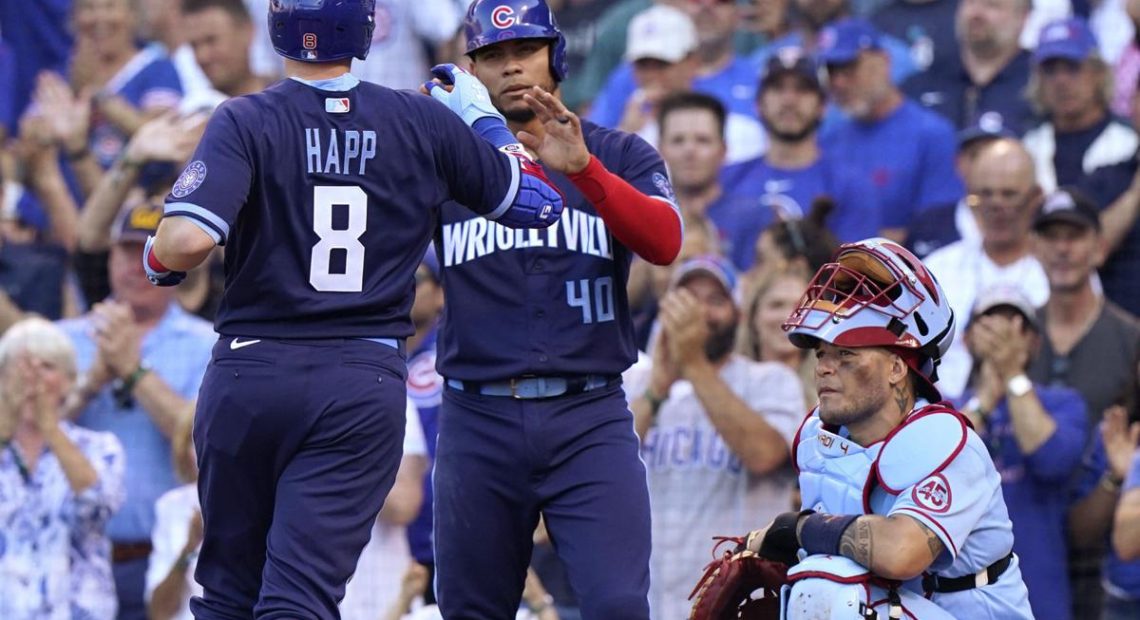 The good times certainly outweighed the bad if you were a Cubs fan this weekend. With Wrigley Field at 100% capacity and the fans going nuts, the Cubs seemed to get another rush of adrenaline that pushed them to winning an important series against the Cardinals. After Friday’s blip, where Kohl Stewart only went 4 innings, the Cubs starters were, dare I say it…good?

Both Kyle Hendricks and Zach Davies went 6+ innings this weekend, giving the bullpen a needed breather to keep from tiring out as this full-length season continues. More big games from the starters, and the Cubs, dare I say it, look dangerous? More important games are coming up, and soon, so we’ll have to see how this team fares.

Let’s be honest: the game didn’t start the way any of us wanted to, with the Cubs pretty much always behind on the score, as Kohl Stewart made his second start as a Cub and almost immediately started giving up hits. In the 2nd inning, a walk and two singles were able to score the Cardinals’ first run of the game, and they added onto that in the 3rd when a walk and two more singles allowed another run to score.

It took around half the game for the Cubs’ offense to show up, but I’d take that over them never showing up at all. The Cubs started out with a solo home run by Joc Pederson in the 4th, and by the top of the 5th the Cardinals had scored another run before Stewart was pulled for Keegan Thompson. A single by Nolan Arenado was all the Cards needed to make the score 5-1 Cardinals, but amazingly the Cubs came roaring back at the bottom of the inning with three runs of their own. Although Contreras walked and Jason Heyward (finally) singled, it was Sergio Alcantara, the second baseman for today, who was the hero of the inning. His triple scored two runs, and after a kind of hilarious Yadier Molina throwing error, he was able to score to make it 5-4.

Though by this time the inning ended with the Cubs behind, it was Anthony Rizzo in the 6th who hit a solo bomb to tie the game, and in the 7th inning it was Heyward again with a leadoff single, Jake Marisnick with a single, and Joc Pederson again being the catalyst for some runs as he hit a double, scoring both men in front of him. The Cubs ended the game offensively for both sides through a solo homer by Contreras in the 8th.

Once Thompson stepped off the mound, the Cubs only allowed one hit and one walk and had five strikeouts. The Cardinals tried to make contact on Craig Kimbrel’s pitches in the 9th inning but kept getting pop-ups that were easy plays for guys like Baez. Even when the first batter hit a ground ball off Kimbrel’s pitch, it was Baez who made a crazy split-second play to Rizzo to get him out quickly. Good work was done by all.

The Cubs have done it again. In front of a rip-roaring crowd, it only took two innings for them to blow this game wide open. Kyle Hendricks was able to pitch 6 innings, a rarity these days for a Cubs starter, and allowed the only two runs the Cardinals would get all game. Those runs were both homers and came off of only three hits he allowed; he also had two strikeouts on the day.

The Cubs, however, had three home runs this game. The first one opened up scoring in the 2nd inning by Ian Happ that scored Willson Conteras, who walked earlier. Four straight walks (and one Pederson flyout) later, and the Cubs were up 3-1. Javier Baez singled to make it 4-1, and Rizzo got hit by a pitch which made the game 5-1 Cubs.

The team never looked back, despite the Cardinals hitting another solo home run to start the 3rd inning. A single and a walk put Hendricks in the diciest situation of the day, but he was able to get out of it thanks to the defense behind him getting lineouts and forceouts. Alcantara homered in the bottom of the 3rd, once again showing Cubs fans that he is competent on both an offensive and defensive level, but what call-ups haven’t been like that so far this season?

Maybe it was Trevor Megill, who didn’t have a good outing after being recently called up, trading places with Kohl Stewart for a reliever position. Megill only lasted 0.2 innings in the 9th and gave up one of only two bullpen hits of the game for the Cubs. He allowed two walks, loading the bases. The Cubs, not wanting to extend this game any longer than necessary, just decided to yank him and put in Craig Kimbrel, who was able to get the final out of the game.

The Cubs continue to dazzle, including on the starting pitching front, as Zach Davies went 6.2 innings of baseball where he gave up only 2 hits and 2 walks. Can I believe I’m writing these words? Not exactly, but I’ll take all the good that I can get for this team.

The Wrigley Field crowd cheered the whole way through (and made a very impressive beer snake in the bleachers) as the Cubs scored twice in the 3rd inning to go up on the Cards. It started out with Eric Sogard — yes, once again I’m amazed — hitting a double to start out the inning. He scored on a fielding error just two batters later, as Pederson was able to reach first. Kris Bryant and Anthony Rizzo then drew back-to-back singles to make it 2-0 Cubs.

Baez was not playing today after likely reinjuring his thumb after running to catch a ball in left field during yesterday’s game. Sergio Alcantara once again filled in for him at short, making all the big plays at shortstop that were needed, occasionally in an impressive Baez-like manner. More please.

After Davies looked shaky to start the 7th inning in a two-out situation, Rossy decided it was time for the bullpen. Ryan Tepera finished out the inning, getting the forceout to strand a few Cardinals on base. He might’ve gone three-up, three-down in the 8th inning if not for an overthrow to first base by Patrick Wisdom. And Craig Kimbrel? Well, we’re all just glad to be watching his hall-of-fame career.

The Cubs immediately turn around to face the Mets this week in New York. The Mets stand at the top of the NL East, and with a 3-game margin. They have played less games than the Cubs have, but are still similarly matched in points percentage, .561 for them vs. .578 for us. The Cubs have quickly and shockingly turned their entire season around, and if they win some games against New York this week, that’s right folks — we will be buyers at the deadline. You won’t have to see Kris Bryant leave until the winter.

Knock on wood, of course.