High On The Hog: Tyler Sikura Lights It Up 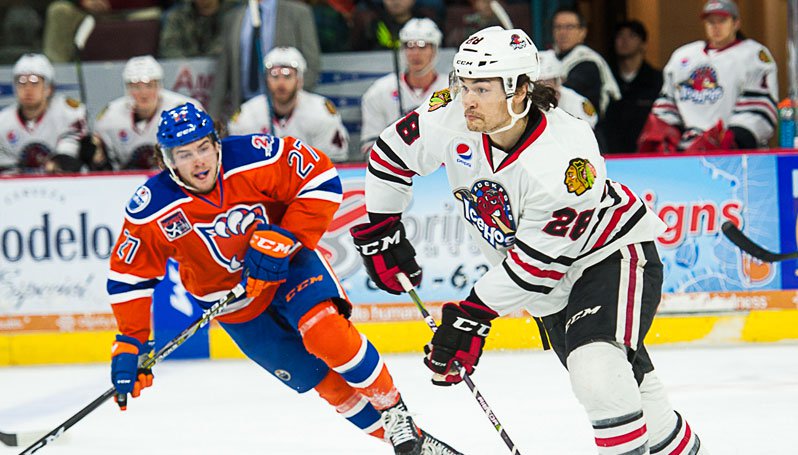 The Rockford IceHogs found success in the first half of a six-game road trip, taking five of six points on their California jaunt this past week. With some new faces in the mix, Rockford remained in the playoff hunt in the AHL’s Central Division.

The Hogs sit third in the division standings as of this past weekend’s action, thanks in part to improved play in the crease and a red-hot Tyler Sikura.

Sikura, who has been a solid bottom-six contributor for Rockford all season, has exploded for eight goals and an asssist in his last ten contests. In California, Sikura stretched his current goal streak to five games.

Sikura is in his third season of pro hockey after a college career at Dartmouth. Before joining the IceHogs this summer, he had shown to be a good point producer at the ECHL level. However, Sikura had yet to register a point in 22 AHL games with three different clubs.

Sikura’s success follows a pretty simple formula; hustle to loose pucks and get to the front of the net. He’s shown a real knack for the redirect the last few weeks and has gotten his shot through in leading odd-man rushes up the ice.

Sikura leads the IceHogs with a 19.6 shot percentage. Its hard to see him hitting at that rate throughout the season, but I’m guessing the hard work Sikura displays on a nightly basis will continue.

Hogs rookie goalie Colin Delia is a California native and gave the hometown fans reason to cheer. His 33-save Wednesday night in Ontario was easily his finest performance to date in a Rockford sweater. Delia followed up that 5-2 victory over the Reign with a 4-2 win in San Jose Friday night.

Matt Tomkins suffered an overtime loss to Bakersfield on Saturday, but turned in a 32-save effort in a 3-2 defeat. With no change on the organization’s goalie situation, it is great to see the youngsters stepping up.

Another Hogs skater hitting twine with frequency is rookie Matheson Iacopelli. The former Western Michigan forward is showcasing his lethal shot to the tune of nine goals and seven assists for Rockford. Iacopelli just doesn’t get to showcase that shot as often as other piglets.

Chicago’s third-round selection in the 2014 NHL Draft has been a frequent healthy scratch for the Hogs this season. Iacopelli is definitely the low man on the totem pole despite his offensive acumen; he’s dressed in 30 of Rockford’s 40 games.

This is not to be unexpected; this year’s roster is loaded with prospects and someone has to sit most nights. On a team built around speed, Iacopelli’s skating ability is in need of improvement. He does have a bit of trouble creating space for himself in AHL action. On the other hand, he has a shot that generates scoring chances and is a plus-seven on the campaign so far.

Iacopelli has sat for an extra defenseman a couple of times this season. On Saturday, Hogs coach Jeremy Colliton elected to skate D Robin Norell as a forward in lieu of Iacopelli. This, after he had swiped a puck and scored in the win over San Jose the previous evening.

On a team with fewer prospects in the lineup, Iacopelli might be getting a ton of power play minutes and a spot on a scoring line. Right now, he’ll have to continue to make do with the ice time he’s getting.

The week started with Tomas Jurco and John Hayden flipping places in the organization; Hayden was sent to Rockford, with Jurco moving up to the Blackhawks. Rockford sent D Robin Press to the Indy Fuel and recalled AHL contract F Alex Wideman.

After clearing waivers, D Cody Franson was assigned to the IceHogs Tuesday, with Erik Gustafsson moving up the ladder to the Hawks. The next day, Chicago’s trade with Arizona resulted in Laurent Dauphin returning to the Coyotes organization and D Adam Clendening rejoining the team he skated for from 2012 to 2015.

Clendening’s best Rockford season was 2013-14, when he notched a 59-point (12 G, 47 A) campaign. He has spent parts of four seasons with NHL clubs, including 31 games with the Rangers last year. He was with the Coyotes for five games this fall but had spent most of 2017-18 in AHL Tuscon, where Clendening had a goal and four assists.

Gonna be a bit sparse, as time and other commitments results in a line-less look this week:

Three games, two wins, five points. Couldn’t ask for much more than that. If Rockford can wind up in the postseason this spring, you can point to this week’s performance as a reason.

The IceHogs are camping out in Cleveland this week, with games at Quicken Loans Arena on Wednesday and Friday night. Saturday, Rockford closes out the road trip in Grand Rapids.

The Monsters and Rockford have split four meetings this season, including a pair in Rockford two weeks ago. Former IceHogs Alex and Terry Broadhurst each have a pair of goals against Rockford in the prior match ups.

Rockford is 6-1 vs the Griffins in 2017-18, though the Hogs dropped the last meeting between the two teams January 5 at Van Andel Arena.