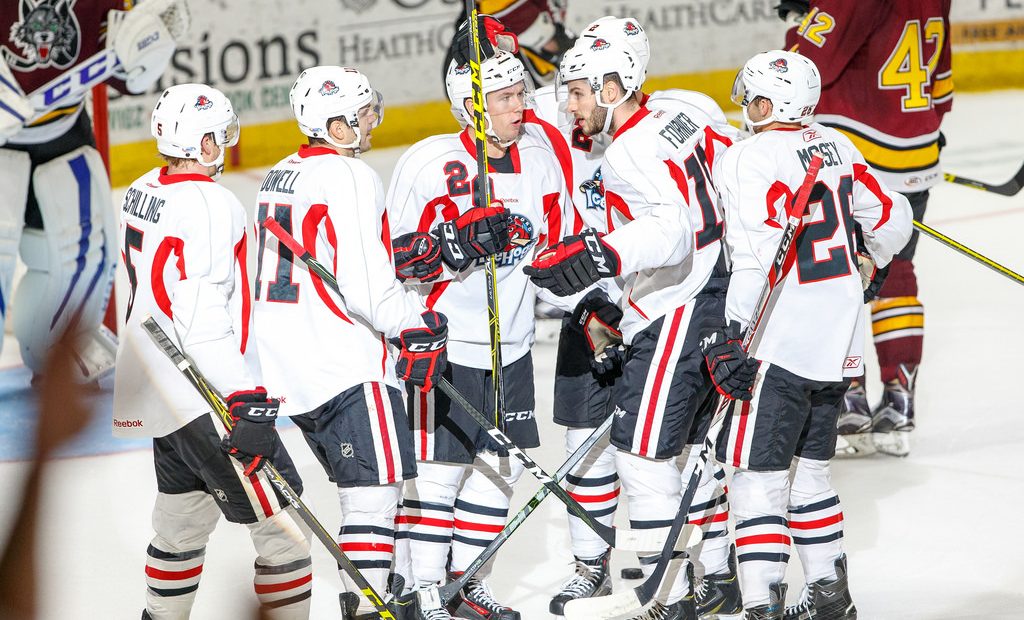 With the NHL starting in mere days, remember that hockey is also gearing up for the Blackhawks affiliate in the American Hockey League, the Rockford IceHogs. I’m excited to begin my third season reporting on the IceHogs for TCI. I look forward to checking in weekly to fill you in on all Rockford shenanigans.

As would be expected, roster turnover is rampant in the Forest City. Depending on how Hawks brass decide to deal with the last few names on the depth chart, there could be more faces of both new and vintage variety skating at the BMO Harris Bank Center this season.

Unlike the NHL, there are no roster limits in the AHL. Still, the IceHogs usually don’t carry more than 24-25 players during the season. Some of the late moves by the Hawks may alter the makeup of the Hogs roster.

The situation at goalie and defense seem fairly stable for the time being. The most chaotic area roster wise is shaping up to be at forward, so let’s use that as our jumping off point.

Players under two-way NHL contracts will appear in bold.

As of my writing this preview, I see just a few legit Hawks prospects on that list. Johnson and Kero fit into that category. Baun has a lot to prove in order to retain the prospect tag to me, but if he’s on this list Carrick deserves to be, too. The rest of the two-way guys are AHL depth signings.

Langlois and Barnes are key AHL contracts right now because there isn’t a lot of scoring potential on the right side. Barnes is a guy who has lit up ECHL rinks but has little experience at this level. Langlois put up 34 points for the San Jose Barracuda last season and could see top-six minutes in Rockford.

Chyzyk, who was a teammate of Nick Schmatlz at North Dakota, could be a contributor. Mosey has decent speed and was around the puck a lot in the preseason contests. He is stepping up in class, however, having played in England last season.

Abbott can provide goals in bunches and should be a top-six player most nights. Labrie, a fan fave who takes begins his third year with Rockford,  is also going to be a mainstay. He may not match last years 20-goal season but he plays physical, gets to the net and can kill penalties.

Dowell is coming off a nice 2015-16 campaign. Though no official word has come down from coach Ted Dent, he is the captain so long as he’s in a IceHogs sweater.

Chris DeSousa is going to forecheck hard, kill penalties, and go to battle sans gloves when needed. I think he likely sticks around through whatever late turnover occurs in the next few days.

Chicago has to cut a number of forwards loose before the start of the season. Alexander Fortin is too young to play in the AHL, so he was sent back to his junior team. Andrew Desjardins has been placed on injured reserve. That leaves 15 forwards on the Blackhawks roster as of this afternoon. There is a possibility that we could see an additional forward heading to Rockford.

It appears that Mark McNeill and Brandon Mashinter are being waived, per TSN’s Bob McKenzie, in order to send them to Rockford. That would give Rockford 15 forwards heading into the season. It also would give them two more vets who can score at this level.

Perhaps one of Rockford’s AHL contracts is sent down to the Indy Fuel if both players clear waivers. The roster could also change if the Hawks make a claim themselves.

Rockford sent Jonathan Carlsson and Nick Mattson to Indy Saturday, leaving Fournier up with the IceHogs to begin the season…for now.

Fournier, who is in the third and final year of his entry contract, has had brief residencies in Rockford the last two seasons before heading to Indianapolis. He was hurt a big chunk of last season to boot.

The competition was a bit thin during the exhibitions. However, Fournier was noticeable in both the games, and for some good things. He seemed more confident taking the puck up the ice and contributed to some scoring plays. That said, he is still going to have to battle for a spot on the bottom pair on this squad.

To me, winning a spot over the veteran Carlsson is a plus for Fournier. If the Hawks keep eight defensemen, Fournier may be able to carve out some AHL playing time. If another defenseman is sent down to Rockford, he may be on his way to Indy.

Otherwise, the defense will have a lot of familiarity to it. Pokka (who is the only right-handed shot on the blue line), Svedberg, Schilling and Gustafsson will fill out the top two pairs in some combination.

It’s Mac Carruth and Lars Johansson in the crease for the IceHogs. Who gets the bulk of the starts? That remains to be seen.

I think Carruth proved he can handle the load of a starter down the stretch last spring. However, the Blackhawks may have more invested in the success of their most recent Swedish goalie import.

60/40 in favor of Johansson? Possibly, though I think Carruth could win those extra starts if he continues the strong play of a season ago.

Putting On My Pondering Cap…

Heading into the season, there is a lot to consider. Depending on what players make the club in Chicago, there could be a real dependence on veteran scoring this season. Like the parent club, the IceHogs look to be very solid on the defensive side and in net. Most of my question marks lie in who’s going to be around to put the puck in the opposing goal.

The league is coming down hard on staged fights with new fighting rules. Frequent pugilists are going to be hit with suspensions as their fight totals mount.

Here’s how the AHL is addressing fights this upcoming season:

By this standard, Mike Liambas (who signed an NHL deal with Nashville and will likely be on the ice for Milwaukee) would have been suspended for 18 games last season.

As a result of these rule changes, I would expect to see more players on each team drop the gloves, as it will be hard to keep one designated scrapper on the ice. It surely will be something to keep an eye on early in the season.

As is the case every year, priority has to be coming out with wins over Rockford’s rivals in Chicago and Milwaukee. When nearly a third of your games are against your two closest division opponents, it’s a good way to rack up points.

Rockford gets a dozen games with the Wolves and Ads, ten apiece with Grand Rapids and Iowa, and eight against Manitoba and four with the Checkers.

The season gets underway this weekend in Cleveland, where the Hogs face the defending AHL champs. Rockford did not win a game in Cleveland in six tries, including two playoff games.

Follow me @JonFromi on twitter in order to get my thoughts on all things IceHogs throughout the 2016-17 season.