High On The Hog: Ready To Roll? 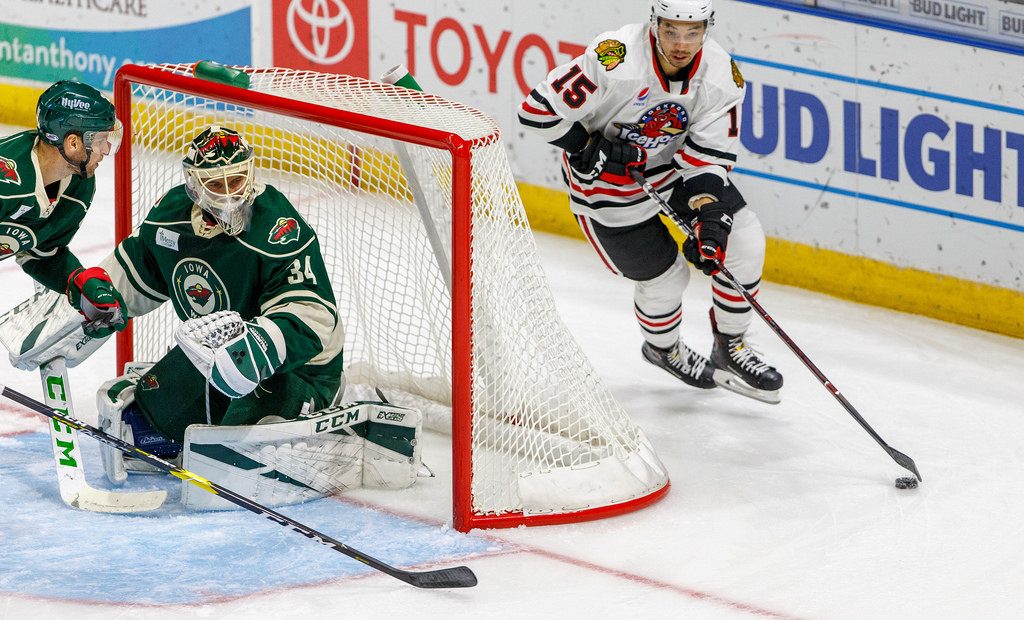 The Rockford IceHogs, Chicago’s affiliate in the American Hockey League, get their season underway Friday night in DesMoines. Rockford will face the Iowa Wild with fresh faces; the team released the opening-night roster Thursday. It’s time for a look at this bunch as the 2019-20 season begins.

It’s hard to think that the Hogs will carry 16 healthy forwards for too long. Hawks prospects Graham Knott and Nathan Noel are already with the Indy Fuel as room is made for new prospects. The three AHL deals in this group are Versteeg, Sikura the Elder and Moutrey.

There is no way that Versteeg, freshly anointed captain by coach Derek King, is going anywhere. Tyler Sikura is an alternate captain and figures to get heavy minutes. Maybe Moutrey finds himself with the Fuel. However, there’s a good chance a few of the younger guys spends a stretch in the ECHL in the first couple of months.

Highmore, who is returning from a 2018-19 lost to injury, is going to be counted on to help pace the offense. Saarela has 30-goal talent at the AHL level and a hot start by the new guy would be great.

Versteeg really seems stoked to be playing hockey in Rockford. If he is a constant in the lineup, there’s no reason he can’t put up 20 goals. Both Sikuras have shown a knack for point-producing in their own ways at this level. Nilsson will be looking to follow up on a promising rookie campaign.

After league-worst offensive production last season, someone’s got to sneak some rubber by opposing goalies on a regular basis. The potential is there, but the new faces are going to have to find chemistry quickly and hope the players above can light the way early.

This is a really young group without any real veteran presence. Carl Dahlstrom getting picked up on waivers by Winnipeg really hurts in this area, but if the high draft picks perform as advertised, that may not be a problem.

Boqvist and Beadin are the latest of a series of highly-touted defensive prospects. Will this duo go the way of Ville Pokka and Gustav Forsling, or will they develop into solid members of Chicago’s blueline?

Gilbert stuck around a good while at Blackhawks training camp. He is still in Europe with Chicago and will apparently be called up to play in this afternoon’s game in Prague. The big defenseman looks like he’s ready to build on last season, where he came on slowly but steadily for the Hogs. Look to Gilbert and Holm to be the defensive stoppers for Rockford. Carlsson showed potential in his rookie season; can he be a power play factor for Rockford?

Krys impressed me in his short stint with the IceHogs this past spring. It will be interesting to see where he will fit into the picture.

I’m speculating that Tomkins is on the roster until Delia returns from Europe. The Lankinen/Delia combo could be the best tandem in the league by season’s end.

I really, really hope so.

He’ll play 60, with 16 goals and 16 assists. Anything above this is gravy. Heck, if he hits those numbers, its still gravy.

Well…first, the Hogs will need to find a way to get the best of the veteran-laden teams in their division like Chicago, Milwaukee and Grand Rapids. It really depends on how quickly a team with 12 rookies can get up to speed in the AHL.

Friday Night vs The Wild

Unlike Rockford, the Wild had a two-game preseason series with Manitoba to get into game shape. Iowa made it to the second round of the Calder Cup Playoffs after finishing third in the Central Division last season.

Gerald Mayhew is coming off a 60-point season and is beginning his fourth full loop in Iowa. Dmitri Sokolov returns from a rookie season of 16 goals and 14 helpers.  Kyle Rau had 26 goals for Iowa in 2018-19.

Among the familiar faces in Iowa is former Hogs center Luke Johnson, who signed with Minnesota this summer after posting career-highs in goals (18) and points (31) with Rockford in 2018-19. Mike Liambas, who was in Rockford back in 2015-16, brings his hard-hitting mentality to the Wild after joining Iowa last season.

Brennan Menell dished out 42 helpers from the blueline for the Wild last year and returns for his third season. Louis Belpedio (6 G, 15 A), Carson Souchy (5 G, 15 A) and Matt Bartkowski (4 G, 15 A) also return to the Iowa defense.

Kaapo Kahkonen flat-out owned the IceHogs last season, shutting Rockford out three times. It is likely that Kahkonen will man the pipes for Iowa to open the season Friday night.

If things break correctly for me, I’ll be taking in Friday’s opener at BMO South (my basement) and sending out a tweet or twelve during the game. Follow me @JonFromi on twitter to join in the discussion, along with thoughts on the Hogs throughout the season.