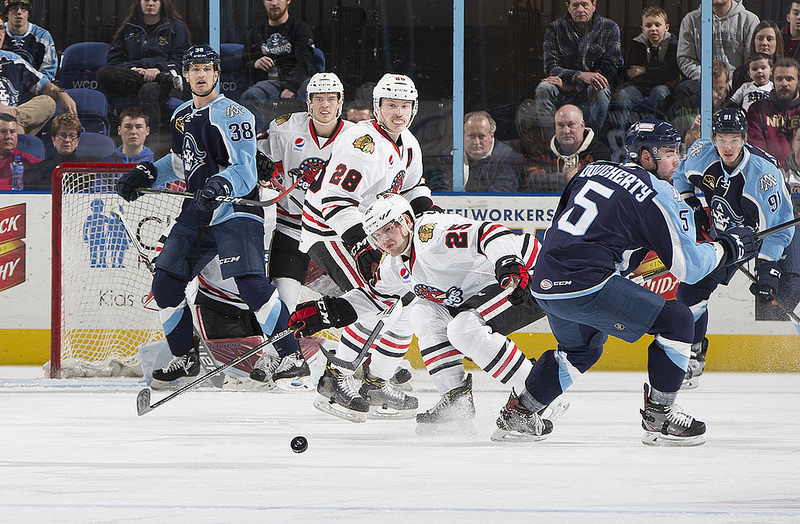 In all, the Hogs have ended regulation even with their opponent on 13 occasions in the 2016-17 campaign. They are 3-3 in the six shootouts to go with the seven overtime defeats. This will come as little surprise, but Rockford’s .231 win percentage in post-regulation action is the worst in the league.

What may be harder to stomach is that the IceHogs are currently working on a fifteen-game overtime losing streak dating back to January 3 of 2016. On that night, Rockford got a P.C. Labrie goal to beat Milwaukee 3-2. The IceHogs dropped their last eight overtime decisions last season and finished with three overtime wins against ten defeats (and were 2-4 in the shootout).

Rockford stayed true to form this weekend, dropping three-on-three skates to the Admirals and Wolves on consecutive evenings. Picking up a point in each game is a bit of a consolation prize. However, losing those third points to division rivals continues to cement the Hogs in the Central Division basement.

To summarize, Rockford is 3-17 in overtime since the league went exclusively to the 3-on-3 format.

AHL signees Evan Mosey and Tyler Barnes spent the weekend in Indianapolis with the Fuel. They were sent there on Thursday and were recalled by the IceHogs Sunday.

Defenseman Robin Press, who began the year in the SHL and has been playing in Indy for a couple of months now, was brought up to Rockford on Friday. The 6’3″, 210-pounder has a goal and nine helpers in 24 games with the Fuel this season. Press, 22, did not participate for Rockford in either game this weekend.

The Hogs rallied late to gain a point in the standings but couldn’t get over the hump in Gus Macker Time, losing their sixth straight.

The Ads scored early on a gaffe by Hogs goalie Mac Carruth. An outlet pass behind the net did not connect and resulted in a turnover that wound up on the stick of Justin Florek. With Carruth sprawled out on the ice way out of his net, it was an easy goal for Milwaukee’s Frederick Gaudreau 59 seconds into the game.

Rockford evened the score with Nolan Valleau’s second goal of the season at the 10:41 mark. The shot from the top of the right circle was set up by Martin Lundberg.

No sooner had the Hogs tied the game when some discipline issues handed the lead right back to the home team. Viktor Svedberg was tagged for a four-minute roughing penalty with a ten-minute misconduct thrown in.

That infraction, coupled with a bench minor for unsportsmanlike conduct penalty gave Milwaukee a two-man advantage. In short order, Gaudreau had his second goal of the period at 11:04. The IceHogs skated to the dressing room down 2-1, but not before Rockford coach Ted Dent was given a game misconduct penalty, ending his evening.

The IceHogs drew even at two goals midway through the game after gaining their own 5-on-3 power play. Brandon Mashinter maneuvered to the right dot and found Spencer Abbott at the bottom of the opposite circle. Abbott drove home the biscuit into the opening afforded by Mazanec for the equalizer at 10:26 of the second.

The score held until the 13th minute of the third period, when Gaudreau completed the hat trick with some help from the skate of Carl Dahlstrom. Gaudreau’s shot from the right half boards glanced off of Dahlstrom’s skate. Carruth couldn’t adjust to the inadvertent redirect and Milwaukee took a 3-2 lead.

Down a goal as the clock began to wind down, Carruth went to the bench for an extra skater. With just under a minute to play, Abbott collected a rebound of a Michael Latta shot and posted his second goal of the night.

The IceHogs, as has been the case this season, weren’t able to convert the late comeback into two points. Milwaukee controlled the puck from the faceoff, winning the game 30 seconds into the extra session. Gaudreau’s shot glanced off of the mask of Carruth before Alex Carrier scooped up the puck and slid it into the cage.

The game went to the Wolves after another goalie muff led to a goal. Chicago handed the IceHogs their seventh loss in a row.

Chicago’s Emerson Clark was busy in the opening period. He battled P.C. Labrie 2:49 into the game. He returned to action in time to open the scoring for the Wolves. Clark caught up to a pass off the boards by Connor Bleackley and backhanded the puck between the wickets of Hogs goalie Lars Johansson. Chicago led 1-0 at the 14:11 mark and held that advantage at the intermission.

Rockford quickly turned the tables on the Wolves in the middle frame. While on the power play, Sam Carrick took a pass from Michael Latta in the slot. Carrick worked his way to the right post before sending a shot past Chicago goalie Ville Husso. 3:04 into the period, the IceHogs had knotted the score at 1-1.

Jeremy Langlois added to the Rockford side of the ledger just 1:22 later. Langlois was Jeremy On The Spot, swatting a rebound of a Martin Lundberg shot from the right circle into the Chicago net for a 2-1 Hogs advantage.

The lead was short-lived, as the Wolves went on the power play and got the equalizer at 7:16 when Sam Blais poked a loose puck between the pads of Johansson.

Entering the final period at 2-2, both teams had ample power-play time to win the game in regulation. Instead, the Hogs went to Gus Macker Time for the second night in a row.

Fortune looked to smile on Rockford as Wade Megan was called for interference early in overtime. Unfortunately, the IceHogs could not convert on the opportunity. Johansson coughed up the biscuit behind his net to Andrew Agozzino. The Wolves forward skated out to the right dot and sent a shot off the post and in for the game-winner.

The Hogs get back at it with four games this week. Tuesday night sees them hosting Chicago at the BMO Harris Bank Center. Rockford visits Milwaukee Friday before returning home for games with San Antonio and the Admirals on Saturday and Sunday.

Follow me @JonFromi on twitter and I’ll do my best to throw out game updates, random stats and my thoughts on the IceHogs all season long.