High On The Hog: Opening Thoughts 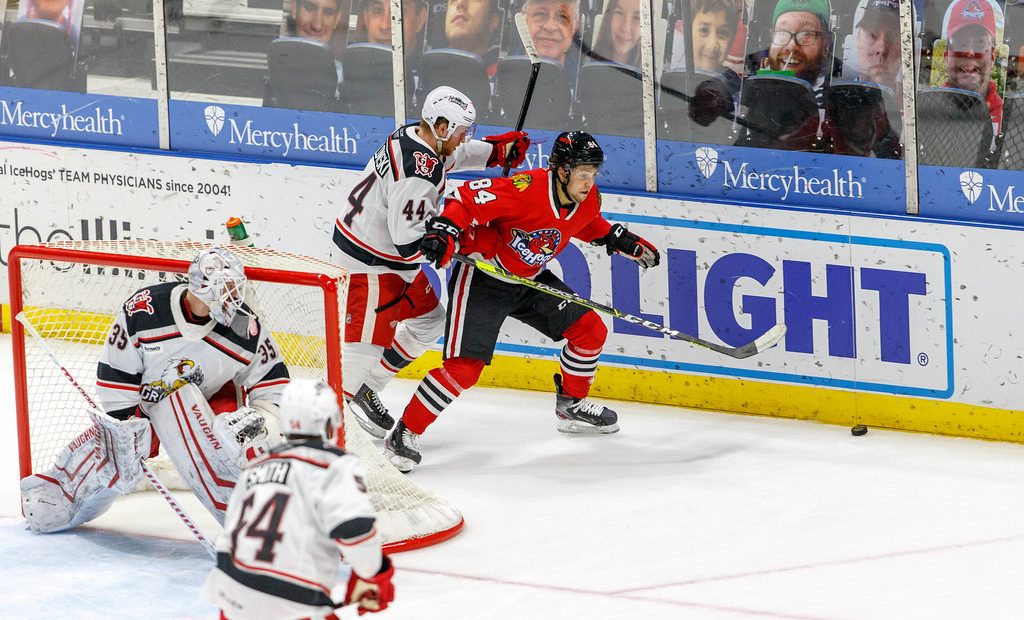 The Rockford IceHogs begin their 2021-22 AHL slate Friday night in Grand Rapids. Here are some quick thoughts on what to expect on the eve of a new season.

First off, the piglets have a roster in place. And then some. There are 31 players starting the season with Rockford. It’s hard to imagine the roster being so bloated for long; There’s really no reason to keep four goalies or eighteen forwards. You’d think some moves will be made to address the surplus of players following this weekend’s action.

As of press time, here’s how things look for the IceHogs.

As I pointed out earlier this week, this is a much deeper group than the group that started play back in February in the shortened 2020-21 campaign. There’s some potential scoring punch with Connolly and Nylander, along with last year’s captain (Mitchell) and leading point producer (McLaughlin).

How much playing time will a player like Busdeker, who was a solid contributor last season, receive now that there are several NHL prospects in front of him on the depth chart? How many of the AHL contracts are assigned to Indy in the next month or so?

Is Connolly going to play with a fire under him? Can Slavin and Altybarmakian take on a bigger part of the offense? How long does it take for Reichel to adjust to North American rinks? What rookies can be impact players in the first few weeks?

Is Osipov a forward (like he’s listed in Rockford) or a defenseman (as he’s listed on Indy’s website)? Does he see time as a hybrid player, or are the Blackhawks serious about developing him up front?

Regula was healthy enough to be assigned to Rockford this week. Stanton and the NHL contracts should be a decent lineup to begin the season if everyone’s healthy.

I Really Hate To Ask, But…

Is Krys, a former second-round draft pick, going to find a steady spot in the lineup after scuffling for playing time the last two seasons?

Can Phillips build on last year’s effort? Can Regula stay healthy and become a top-pairing option for coach Derek King?

Does Galvas follow up an impressive training camp with the Hawks and become an important piece of the Hogs defense? Will a long stretch in the AHL give Beaudin the chance to bloom into a steady NHL defender?

Having Subban, Delia, and Soderblom on this roster could not have been in the organization’s plans this summer.

Who gets dealt, and when?

Either Delia or Subban is going to be considered the goalie who can be recalled in case of an injury. Unless the Hawks want Soderblom to go back to Sweden where he can play regularly, one of those contracts need to be moved to provide development opportunities.

I think the IceHogs would be fine with any two of the current goalies. True, they’ll likely take more bumps with Soderblom and Morris as the tandem, but the kids are playing at every other position, so who cares?

Again, I can’t see this four-headed monster lingering past the first few months. Unless the organization wants four unhappy goalies.

The IceHogs drop the puck on the season at 6:00 p.m. central time in Grand Rapids, then visit the Allstate Arena Saturday night for a 7:00 p.m. start against the Chicago Wolves.

If the piglets come out of their first two games with a split, kudos. The Griffins are one of the more experienced clubs in the AHL. The Wolves, though not the juggernaut they were when they had prospects from two organizations, are still pretty talented.

Rockford dropped its first six games to open 2020-21. Getting points in the opening weekend would make a statement that things might be different this season.

Follow me @JonFromi on twitter for updates and thoughts on Friday’s game in Grand Rapids, along with musings on the IceHogs throughout the season.