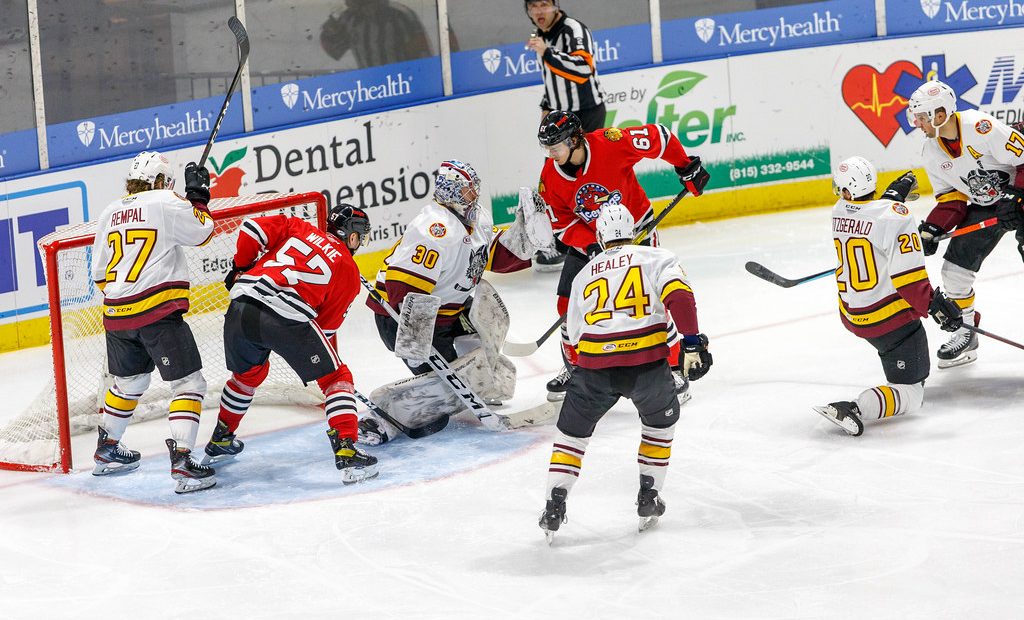 The Rockford IceHogs have reached the midpoint of the 2020-21 campaign. It’s been a different type of season for the piglets, to be sure. The Blackhawks opted to go with an extremely inexperienced AHL affiliate. As predicted, they’ve taken some lumps.

The Hogs enter this weekend’s action with a 6-9-1 mark. I was thinking before the season that it would be difficult for Rockford to win even ten of its 33 scheduled games. Rockford has 16 games remaining, plus one postponed date with the Cleveland Monsters that has not yet been rescheduled.

Can the IceHogs build upon some recent success? Rockford has won five of its last seven games. They rode goaltender Matt Tomkins to two wins over Grand Rapids and have won three of their last four games with the Iowa Wild.

Half of Rockford’s wins come against the Wild, the only team below the Hogs in the AHL’s Central Division. The two teams clash five more times this season.

The IceHogs have just three games remaining with the Griffins. Eight of the 16 remaining games on the schedule are against the Chicago Wolves, who pace the Central with a 10-2-0-1 record.

Rockford has not seen the division’s top team since February 16. They face the Wolves in four straight games over the next two weeks. Hogs coach Derek King admitted in this week’s media availability that the Wolves, against whom his team is 0-3, present a still midseason test.

“They’re one of the best hockey teams I think I’ve seen in a while,” King said. “We need to play our game; we can’t stray from it. We’re going to have to compete and be almost flawless to get a couple of points out of this team. It’s a good challenge for us. I like the way we’re going and the direction we’re going. We’ve got some confidence now. We’re gonna get some goaltending. Things are kind of falling into place and it’s gonna be a big test for us.”

Regardless of the opponent, the piglets are showing signs of progress.

“They’re starting to get comfortable with their surroundings,” King pointed out. “A lot of them…maybe it’s a language barrier or they’re from a different country or just the first time really away from home, and they’re young, right? They’re learning a lot of things on how to fend for themselves.”

“It’s showing on the ice that we’re trusting each other. We’re starting to like each other a lot more, let’s put it that way.”

Hogs By The Numbers

The IceHogs have a home-and-home with their nearest rival starting this weekend. Saturday, the action is in Hoffman Estates at 7:00 p.m. The teams come to the BMO Sunday afternoon for a 4:00 p.m. puck drop.