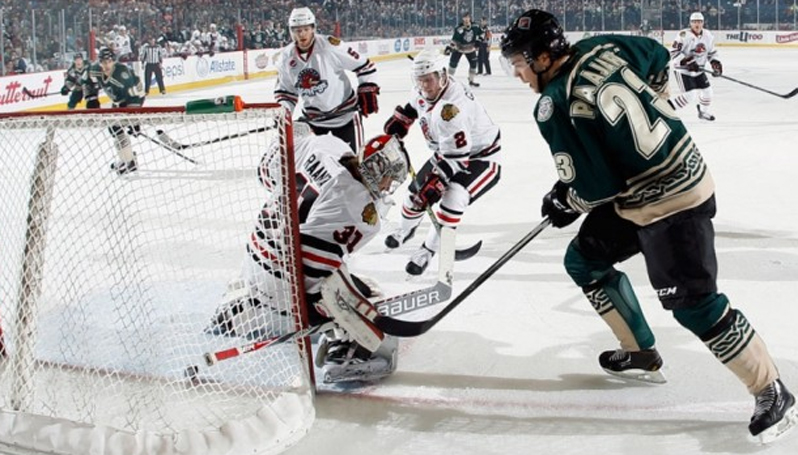 New Look On The Defense

Both Keith Seabrook and Trevor vanRiemsdyk were in action in both of Rockford’s games. Neither figured in the scoring but both players may play a factor in how things go for the Hogs on the back end.

As I mentioned last week, Seabrook hadn’t skated in an AHL rink in about three years before this weekend. He does have more AHL games under his belt than most of his most of Rockford’s defenders. He also has 26 games of playoff experience. Seabrook’s days as an NHL prospect may have passed, but looks like the Hogs are going to give him a chance to provide some depth to the blue line.

Steven Johns was a late scratch Sunday after stopping a shot with his body the night before. As he’s done quite often this season, Rockford coach Ted Dent used seven defensemen Saturday. Dent kept Ville Pokka on the bench for much of the third period in that contest.

This contest was a bit more interesting, if not prestigious, back when there was a team in Peoria and there were three teams vying for the cup. Still, coming out on top for the season against your biggest rival (and a division one at that) isn’t anything to sneeze at.

Matt Carey blasted a 40-footer past Griffins goalie Tom McCollum for a power play goal and a 1-o Rockford lead 14:09 into the second period. However, two Grand Rapids goals in the last 2:19 of the period sent put the Hogs in a hole they couldn’t get out of.

Ryan Sproul struck twine on a 5-on-3 advantage for the Griffins. Just over a minute later, Kevin Porter took advantage of a spotty play by Ville Pokka and beat Michael Leighton to give Grand Rapids the lead for good. Jeff Hoggan stuck the dagger in the IceHogs with a goal 14:49 into the final frame.

Penalty Kill (allowed a 5-on-3 goal in six chances)

The Hogs got to work after a scoreless opening twenty. Midway through the second period, Rockford got on the board on a Brandon Mashinter redirect of a Ville Pokka shot. The IceHogs built on that lead when Spencer Abbott picked off a pass in the Chicago zone. Weaving toward the Wolves net, Abbott beat Jordan Binnington at the 17:27 mark to make it 2-0 IceHogs.

A minute and nineteen seconds later, Abbott fed Ryan Hartman while the Hogs were on the power play. Though Hartman’s skates were below the goal line, he still managed to thread the puck past Binnington for a 3-0 Rockford lead.

Shane Harper made it 3-1 in the eighth minute of the third period but the IceHogs got an empty net goal from Mark McNeill with 1:39 left. The Wolves scored twice in the final minute to make it interesting but Rockford held on for the win.

The IceHogs host the Adirondack Flames on Wednesday and Saturday, then the Texas Stars come to town on Sunday afternoon.