The Rockford IceHogs skated to a 2-1 record this past week, winning back-to-back home tilts this weekend over Midwest Division rivals Chicago and Lake Erie. As Rockford prepares to hit the road again, they now sit behind the red-hot Milwaukee Admirals in the division standings.

With a 4-2-0-1 mark and nine points on the 2014-15 campaign, the IceHogs occupy the fourth spot in the AHL’s Western Conference. Here’s how the past week unfolded for Rockford.

The Week That Was

It was a rough way to end the eastern road trip. Rockford was on its heels for much of the night but managed to build a 2-1 advantage late in the game. A pair of late penalties allowed the Americans to snatch two points from the Hogs.

After a scoreless first, Teuvo Teravainen got Rockford on the board with his first goal of the season. Taking a pass from Joakim Nordstrom on an IceHogs power play, Teravainen skated to the bottom of the right circle and snapped a shot to the far post. The biscuit entered the basket to give Rockford the lead 5:35 into the middle frame.

Rochester tied the game late in the second on a power play goal by Tim Schaller and held the Hogs without a shot through the first twelve minutes of the third period. Despite this, Rockford was able to take the lead late in the 15th minute while killing a delay of game penalty by Pierre-Cedric Labrie.

Phillip Danault got a loose puck that had come around the boards, hitting Mark McNeill a few feet up the ice. McNeill cleared the zone by sending the puck off the boards and won a race to it as it crossed the Americans blue line. He completed the breakaway by putting a backhand top shelf on Rochester goalie Nathan Lieuwen. With 5:15 to play, The IceHogs led 2-1.

Unfortunately, Rockford’s luck ran out. The Americans were awarded a delayed penalty during which they held the puck for over 30 seconds. The play ended at the 17:41 mark when Schaller scored from the right circle. Less than a minute later, Dennis Rasmussen was called for hooking and Rochester took full advantage. Zac Dalpe put in a rebound to provide the Americans with the winning margin.

Michael Leighton was responsible for the IceHogs staying in contention as long as they did, stopping 30 of 33 shots. However, he was a hard-luck loser for the third time this season despite playing pretty well in all three games.

The battle for the Illinois Lottery Cup, currently being used to catch leaks at Allstate Arena, commenced with an exciting back-and-forth affair that wound up going to the IceHogs.

After giving up a goal in the opening minute, Rockford tied things up a few minutes later when Dennis Rasmussen picked up a loose puck at the top of the right circle, skated to his left and struck twine 3:27 into the first. The goal was unassisted, though Brandon Mashinter separated Rod Bordson from the puck to set up the equalizer.

Phillip Danault was on the end of a pretty sequence of passes that made it 2-1 Hogs near the midway point of the first. Mark McNeill and Peter Regin teamed up with Danault, who started the proceedings by bringing the puck into the Wolves zone, dropping it back to McNeill and streaking to the right post.

Chicago tied it up a few minutes later and took the lead late in the second period on a goal by former Blackhawks center Colin Fraser. With 36 seconds remaining, however, Rockford drew even after Mashinter and Ryan Hartman got the puck to Klas Dalhbeck in the slot. Dalbeck unloaded a one-timer over the glove of Wolves goalie Jordan Binnington. Rasmussen was in on the action, forcing the turnover that started the scoring play.

The winning goal came midway through the final frame and was set up by a nice toe-drag across the crease by Adam Clendening. The shot was knocked away by Binnington but Mashinter was at the left post and was able to get his blade on the bouncing biscuit, sending it home at the 8:53 mark.

Fraser was the game’s third star. McNeill was second star and Mashinter, who had the game-winning goal, an assist and was a plus-three on the evening, earned first star honors. Mashinter also nearly had himself a Gordie Howe hat trick.

Cody Beach, having learned little by a second-period fight with Stephen Johns, chirped at Mashinter after the latter was engaged in a bit of shoving with Fraser late in the game. Fraser wisely chose not to escalate things, but Beach seemed to be considering a go at the big Hogs forward.

Perhaps he reconsidered after remembering the Johns caught him with a partial blow with an uppercut in his earlier dance. He probably realized that Mashinter connecting with a similar shot might result in his waking up with his brother Kyle in Europe, or at least the Wolves dressing room.

Most of this contest was dominated by Rockford. The IceHogs outshot Lake Erie 23-12 in the first 40 minutes but allowed the Monsters to draw even after two periods. A three-goal final frame gave Rockford a weekend sweep at home.

The Hogs had several quality shifts in the first period, which made it a bit odd that their lone goal of the period came on a pure individual effort by birthday boy Adam Clendening. With the rest of his teammates changing up, Clendening wove through the Monsters to the slot. His wrist shot beat goalie Calvin Pickard high and hit the cords for a 1-0 Rockford advantage 14:50 into the first period.

The IceHogs doubled the lead near the midway point of the game when Dennis Rasmussen potted his second goal in as many nights. Ryan Hartman got into the right corner of the offensive zone and put the puck in front of the net. Rasmussen gloved the pass and in one motion set the puck on the ice and shot over Pickard’s glove.

Lake Erie, who had been thoroughly outplayed to this point, got two quick goals in the 15th and 17th minutes. Michael Leighton got a piece of a Maxim Noreau shot after the Monsters took advantage of a turnover deep in the Rockford zone. Unfortunately, the puck trickled in just before Clendening could knock it away.

Moments later, with Rockford on the power play, a Monsters clearing attempt wound up behind the Hogs net. Leighton and Kyle Cumiskey got their wires crossed and Andrew Agozzino collected the loose puck and beat Leighton back to the net for an easy shorthanded goal.

Having blown a two-goal lead, Rockford rallied by striking twine on three of its eight shots in the final 20 minutes. Cumiskey had assists on goals by Matt Carey and Hartman and Mark McNeill added an empty net goal to earn 2,577 BMO Center fans free Culvers and put a bow on a successful weekend.

Cumiskey, who had three assists on the afternoon, was voted the game’s first star. Carey and Hartman were second and third stars, respectively.

Wading Through A Myriad Of Thoughts

After going 0-for-4 while up a man Sunday, the Hogs power play is sputtering along at 11 percent efficiency. On the other hand, the penalty kill, much maligned a year ago, has given up just two goals in 21 turns. Rockford offered the Wolves just two power plays Saturday night and did not commit a minor infraction Sunday.

The IceHogs have gone into the second intermission in a tie with their opponent in all seven games so far this season. With solid goal tending, Rockford has been able to stay in every game.

As much as it stung to see a two-goal lead evaporate Sunday, it was just as satisfying to watch the Hogs come out and re-establish themselves in the third. Lake Erie was coming off of its third road game in as many days, so Rockford will need to be more frugal with a lead when the Monsters come back to town November 4.

I was speaking to Chris Block at the first intermission Saturday night when I mentioned that I hoped we wouldn’t see Rae Carruth in net over the weekend. That would be the 487th occurrence of such a slip up since Mac Carruth was drafted by the Hawks in 2011. Carruth has been up from Indy the last few days but has yet to get a start.

The fact that Scott Darling was called to Chicago in the wake of Corey Crawford’s injury (and played well in his debut) tells me that the Hawks organization may have settled on a possible prospect behind the current tandem of Crawford and Antti Raanta. That looks to be Darling, not Carruth.

If Carruth has any shot at remaining in the organization, he has to receive and then take advantage of whatever minutes he gets in Rockford’s net. Unfortunately for the former Portland Winterhawks standout, that chance may not come in his current stint before Crawford is back in net and Darling is back with the Hogs.

Alternates for Saturday and Sunday’s games were Clendening, Nordstrom and Regin. None of these players had previously worn a letter this season. This seems like quite the carousel but it’s pretty typical for the IceHogs. Maybe a captain will be named in a few weeks. Maybe.

Teravainen picked up his first goal of the season this week and then…not much. He was pretty invisible Saturday night. Sunday went better for him but the line that really made things happen in the two wins was Rasmussen centering Mashinter and Hartman. Coach Ted Dent started this group in every period over the weekend.

Both Mashinter and Hartman squared off with opponents on Sunday. Of course, Rockford fans have been waiting for someone to forget that the guy they were about to face off against was Mashinter. Seven minutes into the third period Sunday, that guy was Monsters defenseman Duncan Siemens.

After letting his dance partner come up short with several jab attempts, the 6’4” forward took control, landing several big shots and yanking Siemens around the corner of the Monsters zone with his left hand. A decisive win capped a nice weekend for Mashinter. He was a plus-four in the two games at the BMO Center.

Hartman, along with Regin and McNeill, leads the IceHogs in scoring. All three players have a pair of goals and three assists for five points in seven games. Hartman’s plus-six leads the club.

Regin took a big hit along the boards in the third period Sunday. He skated to the locker room and did not return. This could prove interesting. With Daniel Carcillo on the shelf for a month, there could be a recall to Chicago for a Hog early this week. If what is needed is fourth line support, it will be either Regin or Mashinter depending on what the Hawks want.

If Regin is injured and Mashinter’s muscle isn’t required…you could reward Hartman or McNeill with a call-up. The point should be moot as Jeremy Morin should slide right into the fourth line with Hogs alum Marcus Kruger and Ben Smith and make a pretty fun trio, but that may make too much sense.

Rockford has a Wednesday date in Grand Rapids before a pair of games in San Antonio Friday and Sunday. 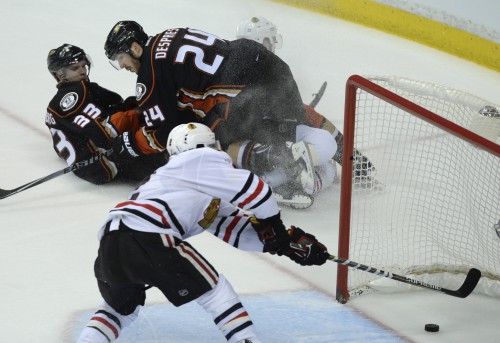 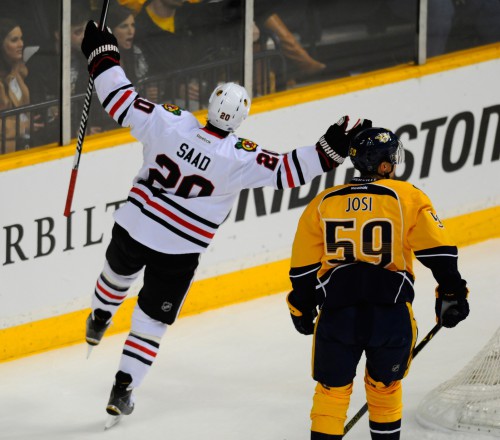