Out Of GAS: Oilers 5 Blackhawks 2 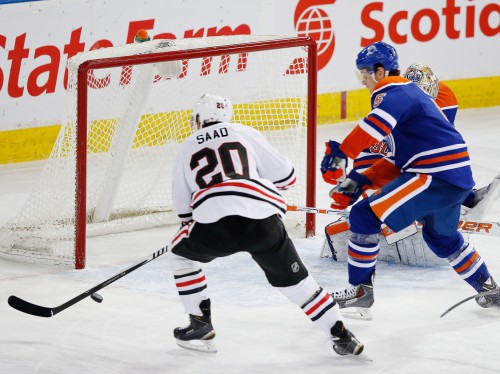 The Blackhawks, fresh off a win despite being thoroughly outplayed in Minnesota on Thursday evening, lost to the Edmonton Oilers and new coach Todd Nelson on Friday night. In his post game quotes, Coach Quenneville didn’t even sound angry. He sounded like your mom or dad sounded after you  forgot your math textbook in your desk in elementary school.

There really are not many big takes to come away with on this game. Edmonton played pretty well and clearly had a level headed approach to the game. There weren’t any major problems with the way the Oilers played. They seemed well disciplined and earned the win. Derek Roy had a goal and two assists. Jeff Petry played an outstanding game as well despite really tough minutes.

Chicago played like they were out of GAS (Give A Shit). Not taking anything away from the Oilers, but they are a young team, lacking in defensive skill that quite frankly, a team like Chicago should beat. All of the points for the Blackhawks came from Brandon Saad, Marian Hossa and Jonathan Toews.  Saad played like a man possessed. Hossa was a machine as usual. Teuvo Teravainen was also impressive. Despite not showing up on the score sheet, he had some really nice passes particularly when playing with Patrick Sharp and Andrew Shaw.

This is probably a write off game for the Blackhawks. Points would have been nice and should have been earned but they weren’t. This isn’t a statement game that somehow means the Blackhawks are terrible. Antti Raanta didn’t have a great game, but he also hasn’t played very much lately. Corey Crawford seems to have shaken the rust off after a bumpy return from injury so there probably isn’t much cause for concern in this regard.