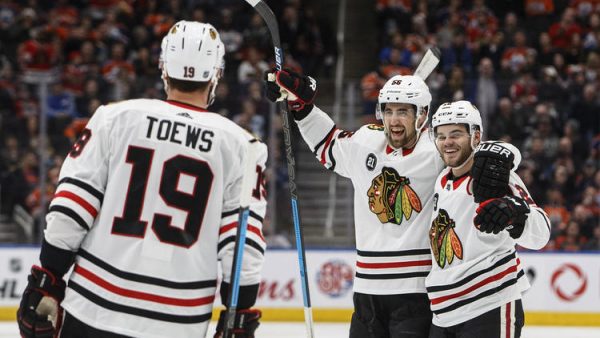 – Things started well enough but then the last half of the first period went to shit for the Hawks. They took four straight penalties, some of which overlapped leading to 5-on-3s, and Leon Draisaitl was having his way with the Hawks, scoring two goals in about two minutes, both on power plays. The defense looked generally lost, and in particular Seabrook got absolutely smoked by Connor McDavid. I know that’s not shocking and shouldn’t even be news, but in real time it was ugly to watch.

– Prior to the penalties and the Hawks basically falling to pieces for a while, our favorite beneficiary of the Fels Motherfuck, Erik Gustafsson, potted his 11th goal of the year and it came…wait for it…on the power play. We talked about it on the podcast last night, and I’m telling ‘ya, someone is going to take Gus for a real defenseman and if the Hawks play their cards right, they can cash in off the results of this motherfuck. We’ll be waiting by the phone for the kudos and our share of the spoils.

– But enough of all that—five goals in one period! If it had been against any other team I wouldn’t have believed it. But this is the Oilers, and despite Ty Rattie have a good night with three shots, Draisaitl scoring twice and Connor McDavid being Connor McDavid, it still wasn’t enough. And once the Hawks rattled them with Hayden’s goal, a fourth-line goal that was the result of a quick passing play from Marcus Kruger early in the third, the Hawks just kept scoring at will. In fact is was a DLR in the span of one period, and Ken Hitchcock had no idea how to help his team respond. Which is hilarious, except when you think about a generational talent being wasted on this shit organization.

– And I have to say, I’m bummed FOR McDavid. Sure, he makes a shitload of money and no, I’m not actually losing sleep or anything, but it’s hard to see a game like this, and records like what the Oilers have, while also seeing his capabilities and not rue the fact they’re being so blatantly wasted in this mis-managed and poorly coached dumpster fire of a team.

– But before it sounds like this was just another example of the Oilers fucking up royally, let me state for the record that the Hawks got their shit together and played better as soon as the second period started. They came back from the first intermission being on the PK but killed off the last of that string of penalties, and they bounced back from being underwater in possession in the first period to a 60 CF% for the second. The Kane-Toews-Caligula line in particular had a number of strong shifts in the offensive zone. Ward had a highlight reel save against Rattie to keep it 2-1. They played WELL during the second and just carried that into the third, which is when it translated into goals.

– The second line looked really good tonight as well. They only scored one goal (only! We can say only one because there were so many!), but they had a 67 CF% and had strong shifts all night. And not only did Dominik Kahun get an assist on Strome’s goal, he got one of his own in the barrage later in the third period.

– You know I love to complain about the defense, but get this: every Hawks defenseman had a 50 CF% or better, and as a team they only gave up 27 shots tonight. Despite the incident of McDavid lighting Seabrook on fire, and some early struggles during the bad half of the first, this was actually a relatively competent defensive effort. Is this the end of days?

So here we are talking about the Blackhawks being three points out of a playoff spot. Let that insanity sink in. To be completely honest, I don’t think this is actually a playoff team, and what we’re seeing is them benefiting from shitty opponents, a good power play, Patrick Kane, and a large dose of luck. But whatever, they’re on a hot streak right now and are beating the teams they should be beating. So I’m not going to look the proverbial gift horse in the mouth, and let’s enjoy it while it lasts. Because it won’t last. Onward and upward!

Line of the Night: “The senior citizen behind the Oilers bench…” –Foley, attempting to throw shade at or be polite to Ken Hitchcock, I’m still not sure which…

Tags: Brent Seabrook Chicago Blackhawks Connor McDavid Edmonton Oilers Erik Gustafsson Leon Draisaitl the Fels Motherfuck is real This is not really a playoff team but they play one on TV