Game #53 – Flames vs. Hawks Q&A: Mike Pfeil of HockeyGraphs And The Underworld 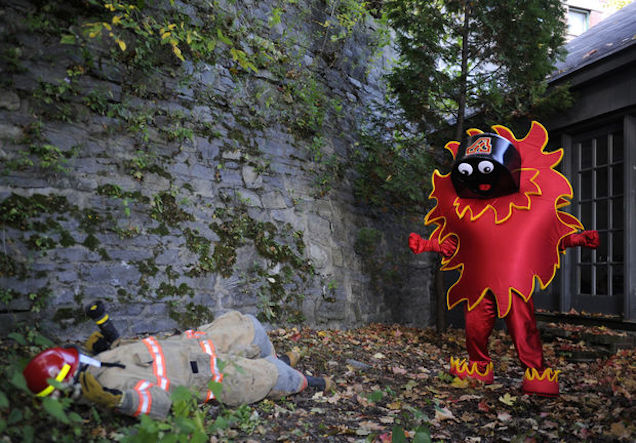 Mike Pfeil is a stats-y guy at Hockeygraphs.com. He’s also a weirdo. So he’s our type of guy. Follow him @MikeFAIL. These were the questions we put to Floob on Saturday, and now Mike gets his chance.

Last time we saw the Flames on New Year’s Eve, they were just hovering around the last playoff spot, not meeting expectations, and still waiting to take off. A month later, they’re hovering around the last playoff spot, kind of not meeting expectations, and waiting to take off. Why hasn’t it come to a boil in Calgary?
The power play for starters, something that has approached near-catastrophically disappointing levels. On one hand, you still Dave Cameron, who hasn’t been encased in concrete and tossed in the Bow River. On the other hand you have Glen “Glenny G” Gulutzan being seemingly cognizant to the folly in front of him yet not solving. There’s enough talent at forward to not play Troy Brouwer on PP yet he does it again.
Also there’s the part where they’re chokers. Some would say that’s “mental fragility” and “they don’t know how to hold a lead.” I say they’re the suckiest bunch of sucks that ever sucked.
Do we know if Glengarry Glen Gulutzan falls into the “Moron” category or “Not A Moron” category yet?
He’s a slightly-slightly-above average coach at 5v5. Most coaches and the impacting of coaching is indiscernible from others. If you look at their 5v5 systems (last year, specifically) it was an easy observation to say “Yeah, he’s definitely better than Bob Hartley.”  This year it’s weird and I think part of it comes from fan expectations, often bordering on unrealistic; some systemic changes that have hurt them, specifically in relation to how they struggle at shot suppression relative to last year; and some bets on players that haven’t worked like Michael Stone, Travis Hamonic, Brouwer (continued usage), Sam Bennett, and sub-optimal depth.
At least there’s Dougie Hamilton, right?
I fucking love that man. Well, minus the chud-ass Barstool shit he said a few weeks ago. Shout out to everyone who hates that fuck heap website. Play him at 5v4 more than any other defenseman and maybe things will improve. Seriously.
The Flames don’t seem to be in a position to just punt on the season given their development curve, so what might they do at the deadline? And are you afraid it’ll be stupid?
Going after Mike Hoffman or an actual top six RW scoring threat would be nice. Rick Nash would be neat on retained salary providing his acquisition cost isn’t absurd, but it’s doubtful. Maybe you can fleece Ken Holland, who might be struggling to realize what year it is and pry out a Tomas Tatar or Gustav Nyqvist for cheaper than expected? All that said I’m as afraid as others, but I’m emotionally checked out… providing they don’t acquire Zack Smith. Don’t do it.
Given that the Kings actually suck and the Ducks are weird, the Flames really should still get into the Pacific’s three playoff spots, right?
Yes, undoubtedly, providing they don’t continue shitting the bed. They’re going to shit the bed aren’t they, Sam?