Game #50 – Hawks vs. Predators Spotlight: If This Were Baseball, We’d Joke About PEDs 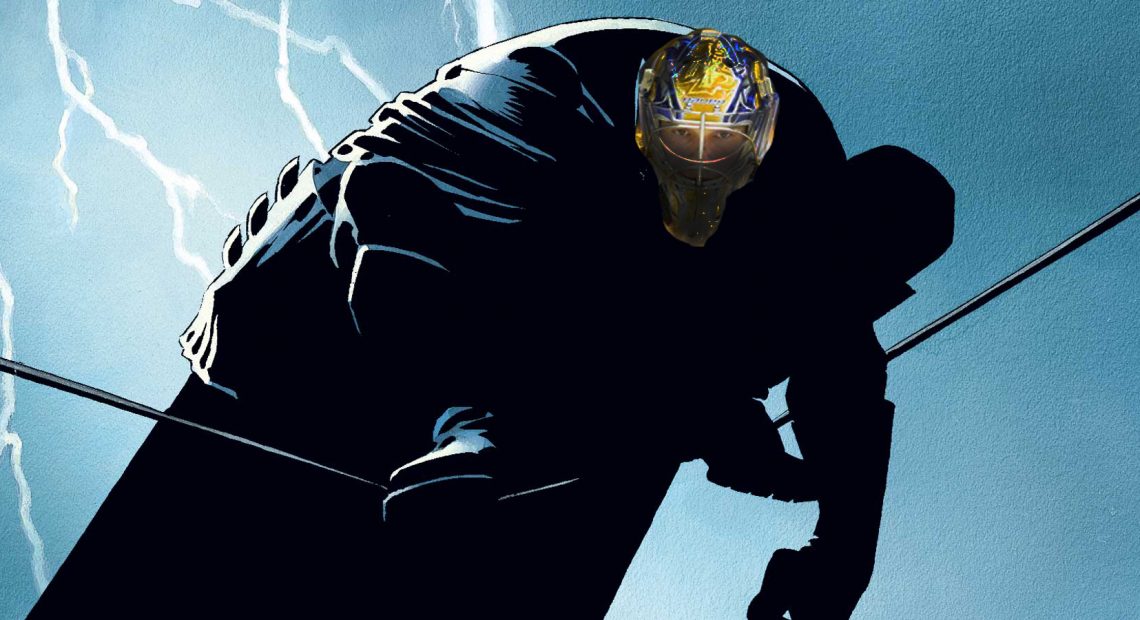 We got a lot of things wrong last spring. To be fair to us, which we ourselves never are, just about no one saw the Predators sweeping the Hawks, even if they thought they would be a real threat. And the biggest thing we didn’t see coming is Pekka Rinne throwing a .960 at the Hawks in four games.

He’s apparently still pissy about that.

Somehow, Rinne is playing the best hockey of his career at age 35. His .937 save-percentage at even strength is the highest of his career, and by four points over his 2011 and 2015 mark (at least that season he did lose control of his limbs against the Hawks in the playoffs. We had precedent, dammit!). His overall .927 mark would be the second highest of his career, only trailing the .930 of that same ’10-’11 season.

Look a little deeper, and Rinne’s numbers get even more impressive. The difference between his actual save-percentage at evens versus his expected save percentage, i.e. a rating of the chances he’s seeing, not just the amount, is far and away the best of his career. It’s 1.09 (.937 at evens vs a xSV% of .925). The next highest mark in that category in his career is .72, and that’s a massive difference.

You may want to suggest that he’s benefitting from the Preds superb blue line and the fact that the Preds have the puck all the time limiting the shots he sees. But A) this is actually the lowest expected save-percentage that Rinne has had since 2010, so the Preds’ firewagon style is exposing him more than he has been before. Second, the Preds are a middling possession team, the very definition of it at 50% in Corsi-percentage. They’re expected-goals percentage as a team is even worse at 47.7%. They give up a lot.

Which is why Rinne’s season is so impressive, though might be a little more perilous than Preds fans would like. His SV% on high-danger chances is .845, the highest of his career by 48 points. That could be a problem. It’s the third-highest mark in the league among starters, trailing Ben Bishop and Sergei Bobrovsky and just ahead of Lundqvist and Vasilevskiy. Maybe this isn’t a problem if you think Rinne is among that level of starters. He hasn’t been for years until this one, is he really rejoining that club at 35?

So what gives? JR Lind in our Q&A suggests it’s rest, and that could be part of it. Rinne is slated to only start about 60 games this year, the third-straight season he’ll be around that total. But he hasn’t missed any time due to injury, it’s just been a straight rotation as Juuse Saros has been able to shake off early-season blahs to be one of the league’s better backups. But can that explain it all?

There just isn’t much of a precedent for a goalie having a resurgence at 35. The first name you obviously think of is Tim Thomas, who won Vezinas at 34 and 36 along with a Conn Smythe at the latter. But Thomas wasn’t anywhere until his 30s. Rinne was a frontline starter in the league at 26. Lundqvist is having another excellent season at 35, but his form never really dropped. He’s just always been this. Like Rinne though, Lundqvist is having a miraculous season when it comes to high-danger chances, with a .844 SV% on them which betters anything he’s done in the past five years by a long way. Corey Crawford, though obviously a few years younger than both, was also having his best season on high-danger chances before he went to the land of wind and ghosts. Bobrovsky is putting up his second consecutive season of robbing people with the best chances.Ben Bishop is having his best season in that spot as well. What exactly is going on here?

Perhaps this is just a league-wide trend, as goalies get better and better. Perhaps due to expansion and flattening cap, teams just don’t have the amount of finishers that they once did to bury these chances, whereas teams can find one guy to stop them much more easily than five or six guys to score them. Whatever it is, Rinne is certainly riding the wave and the Preds hope it goes until June.

Tags: Nashville Predators Pekka Rinne rising save percentages something is up