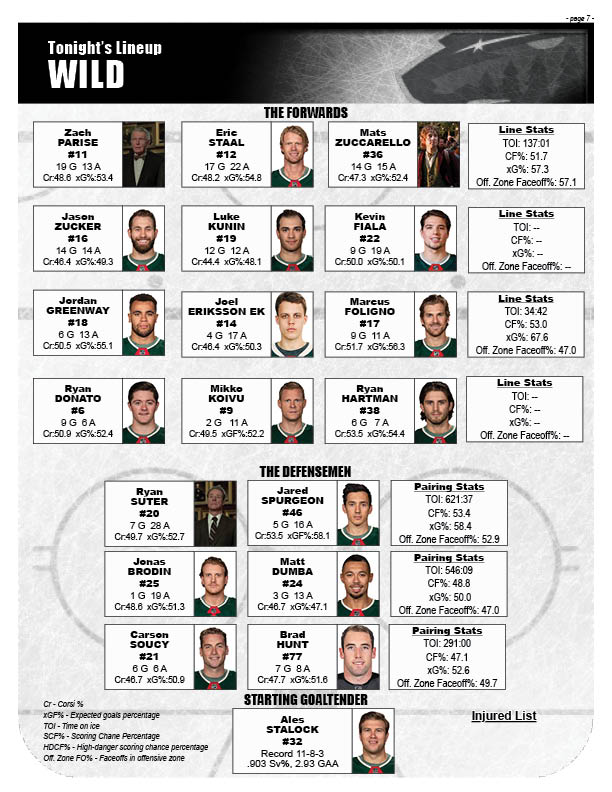 Notes: The big story with the Wild is that Matt Dumba is going to be out for basically the rest of the season. Outside shot he could be back at the end of March, but without him they lose a ton of their get-up-and-go from the back. It’s basically Spurgeon now…they’ve moved Coyle back to center, which means six more weeks of winter…Koivu has been demoted, so you can see how his season is going…Dubnyk was awful in November but seems to have rebounded the past few weeks…Granlund hasn’t scored since November 29th…Parise was on fire a couple weeks back, with 13 points in 14 games, but hasn’t scratched in his last four at all…

Notes: Not much change here. Not sure why Sikura gets the demotion when he and Top Cat seemed to have struck up an understanding and it’s unclear what you want out of him on a fourth line. Look for this to last a period…Gustafsson is so unpredictable that he’s basically forced Keith to iron out and pull back his game a bit, which is fine with us…why is Forsling starting so often in his zone?…Delia looks to get the start after Ward’s tour-de-stupid on Sunday. If he plays well, he should keep rolling until he proves he can’t anymore, and that includes South Bend…