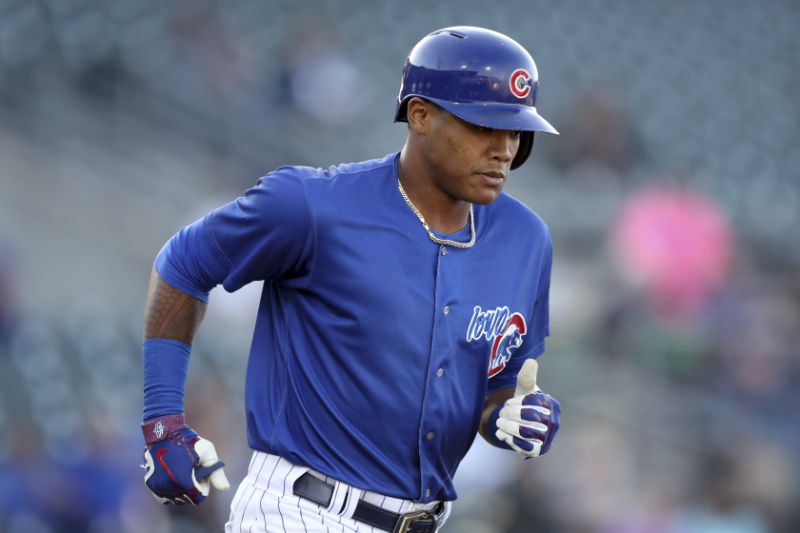 The Cubs have found themselves in a situation they’ve been in no way prepared for, I think that much we can agree on. So yesterday’s decision to option Addison Russell to Iowa when his suspension is up makes sense in that it buys everyone some more time. What they’ll do with that time, I don’t have any idea and am searching for confidence.

Most of me thinks this is simply a baseball decision, and if anything is beyond that it’s merely trying to put off the unpleasantness of Russell’s return. On a strictly baseball plane, there isn’t room for Russell right now. Javier Baez has proven to be the better player on every side of the ball. And for those dinosaurs who still can’t seem to see past Russell’s projections as a prospect, it’s important to note he’s never come all that close to even putting up an average offensive season. Whereas Javy is working on his third straight of being at least that good if not way better. Yes, Russell’s defense is steadier, but Javy is well on his way this year to matching Russell’s defensive metrics of the past couple years (Baez has been worth 2.0 defensive runs in just one month according to FanGraphs, and Russell was at nine and seven the past two years).

Beyond that, David Bote–who I’m still not convinced will hit for shit when pitchers just stop throwing him fastballs–has been too good to lose the fifth infielder spot, and in fact has forced Bryant to the outfield more often than not recently. Same goes for Daniel Descalso, as much like Bote is putting up offensive numbers Russell has never approached. Who loses ABs here? Essentially, the Cubs are trying to buy time to see if anyone gets hurt.

The only baseball concern is that Javy tires out from playing short every day, though if you ask him I’m sure that’s exactly what he’d want. And Bote could probably make a fist of it once every couple weeks if you really needed him to. It wouldn’t be pretty but he’d get you out of a game.

It’s the asking him part that I have a problem with.

I’m sure this type of thing goes on all the time in a clubhouse. And I’m sure Joe Maddon, who has quickly become the answer to a question no one asked, was just trying to be kind to Javy. But this is the problem with Maddon, is that the more he talks for the sake of hearing himself the more he ends up having to answer for.

Maddon almost assuredly never considered this, and I doubt the front office would have sanctioned it if they’d been asked, but that’s far more weight than Javy or any player should ever be asked. It’s not his job to determine where and how much Russell plays. That’s Maddon’s job. He doesn’t need to ask Javy what he thinks. Javy was given an everyday role last year essentially for the first time, certainly no more than the second, and came up with a MVP-finalist season. He’s playing just as well this year, if not better. You know Javy wants to be in the lineup every day, and he’d like to be at his natural position.

But he’s not going to say that, because no teammate ever does. He’s not going to tell Joe, even in a bunker that’s been swept for bugs and assured total secrecy, that Russell can go fuck himself and spot start at second for all he cares. It seems like Joe is just trying to cover himself and open an avenue for Russell to play short so he can then say, “Javy said this is what he wants, and he wants what’s best for the team because he’s a good teammate.” That’s the only reason you’d make this public.

Second, whether Maddon or the Cubs front office likes it or not (OR NOT), Russell just carries more with him upon promotion and insertion into the lineup. That’s what the Cubs chose to take on and carry, and we went over that yesterday. To put that on Baez is wholly unfair, because he’s not equipped to deal with that, nor is he in a position to have to do so. It would be a near travesty if Baez somehow got blamed for the presence of a player a lot of Cubs fans find detestable and don’t want around in the first place. Baez shouldn’t be sullied in such a way.

Again, the Cubs chose to take this one, and they’re going to have to show their work every step of the way. And they have a lot of the time recent. But dragging another player into it isn’t helping anyone.