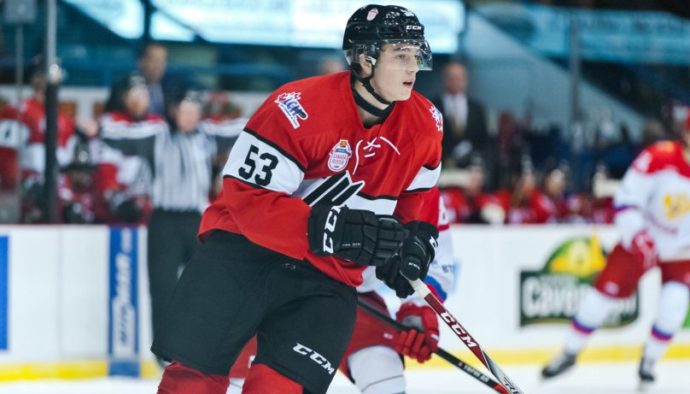 Moving back to looking at actual possible draftees tonight, it would seem if the Hawks want a mobile, offensively-inclined, mobile defenseman, they can have one. There’s plenty out there. And here’s another one, Noah Dobson from Acadie-Bathurst in the QMJHL.

The problem with players from the Q is the desire is to throw out their production with a wave and a dismissal of, “A drunken goat can rack up a point per game in that league. ” Also a drunken goat represents a couple of different sections of Quebec in Parliament. And it’s true, the Q is by far the highest scoring league of the three junior leagues. So Dobson racking up 69 points in 62 games is as impressive on the sheet as say Ty Smith’s total in the WHL, Smith’s are probably more hard-earned.

Still, Dobson has a lot of things that are going to make NHL teams’ eyes widen. One, he’s big. 6-3, 180 now and can probably fill out to near or at 200 pounds one day. And that doesn’t take away from his speed, because he’s probably the fastest d-man in the draft, non-Dahlin Division. As far as physical package goes, there are few more enticing than Dobson. And considering the different priorities of all the voices in the Hawks’ war room, he should have something for everyone.

Statistically, Dobson has some things that make you take notice and some that give you pause. 11 of his 17 goals and 29 of his 69 points were on the power play, where he has a boomstick of a one-timer, on par with Wahlstrom’s. And hey, power play points count the same. Secondly, Dobson bombed 4.2 shots per game at all strengths on net, which is basically insane for a d-man at any level. So he gets into the play and he makes things happen there. All good.

There’s also concern about his defensive reactions and instincts, and the Hawks are big on closing gaps and stepping up. But you can be taught that, if the Hawks were patient. Though that’s not been a strong-suit for them either.

Still, the Q just doesn’t produce that many good d-men. In the past five years, of all the leading scorers on the blue line in the league the only one to have any sort of impact at the NHL level is Samuel Girard, and that’s really only as a trade piece in the Duchene/Turris deal. Going back all the way to 2010, the only d-men who scored a ton there who had any sort of time in The Show are Barbeiro, Beaulieu, and David Savard. Compare that with the leaderboard in the OHL just two years ago where Sergachev, Dunn and Chychrun have all made something at the top level.

Dobson figures to be around for the Hawks when they pick. He’s been slotted anywhere from 7th to the mid-teens, and really only if there’s a run on d-men would the Hawks feel pressured to take him. He checks a lot of boxes, but I’d worry about the path he’s taken to get here.