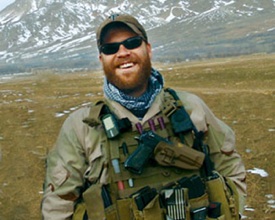 Born in Collegeville, PA, Marc Small volunteered for military service in the early 2000’s. In 2004 he entered the army as a Special Forces Trainee and by 2007 had earned his Green Beret. In 2009, he was deployed to Afghanistan as a medical sergeant. During his time in Afghanistan, Small treated sometimes upwards of 50 patients a day before he was killed in an attack on his unit in February 2009. His awards and decorations include the Purple Heart Medal, Army Commendation Medal, Army Achievement Medal, Good Conduct Medal, National Defense Service Medal, Afghanistan Campaign Medal, Global War of Terrorism Service Medal, Noncommissioned Officer Professional Development Ribbon, Army Service Ribbon, NATO medal, Overseas Service, Parachutist Badge, Combat Infantry Badge, and Special Forces Tab.

Happy Memorial Day to everyone – and thank you to all that have served.