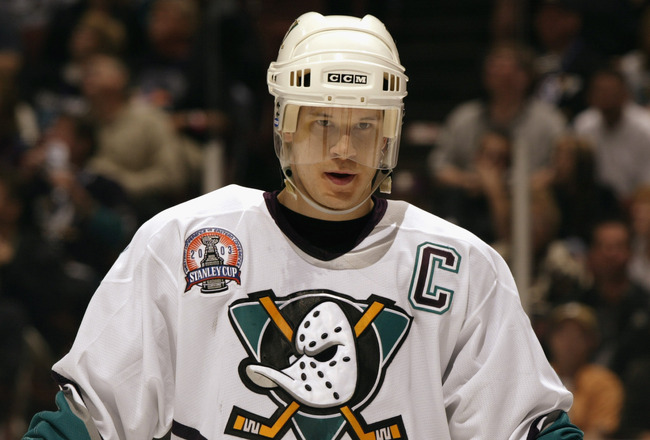 It’s actually kind of amazing that I could so easily zero in on one such player. I’ve irrationally hated so many I would have thought this might take hours for me to even come up with a shortlist. And I mean, really irrationally. I hated Dan Hinote. I couldn’t tell you why, I just did. Adam Deadmarsh, who actually is one of McClure’s favorite all-time players which only makes me hate him more. I even hated Peter Forsberg (maybe it was just an Avs thing?) Shawn Burr. Kris Draper. Teemu Selanne Sergio Goddamn Momesso. Darien Hatcher. Fucstick Cicarelli (and if one of you doesn’t write up Dino, then you’re all basically fired and we’re getting a new readership).

But man, Paul Kariya. I hated his guts from the moment he arrived in the NHL, and it never stopped. It doesn’t stop to this day in some ways.

It’s not that Kariya wasn’t a marvelous player. He most certainly was, and his speed at the time was truly breathtaking. He had great hands. And trying to describe all the things about him that pissed me off, it’s hard to pin down.

Basically, the asshole was hockey Jordy Nelson. You wouldn’t see him on the screen at all for minutes (and he took really long shifts so you knew he was out there somewhere) on end, and then he’d just pop up completely alone and score. EVERY FUCKING TIME. And all five Hawks would stare at each other after while he was smiling that fucking smile and pumping his annoying little fists, as if they couldn’t figure out where he came from.

It was more though. That face. UGH. That face. Much like the reasons I used to hate Tim Lincecum, Kariya looked like that rich kid you went to high school with and you were dying to kick his nuts through his skull but you had to be nice to because he had the best toys, threw the best parties, and probably the best drugs. He was the one who like, played Dave Matthews Band CDs for girls at parties and convinced them it was the most emotional shit ever. I have no doubts Kariya can play “Crash” on an acoustic guitar. And worst yet, no one could ever catch him to mete out the justice you wanted for him so badly, much like that kid always skated because of his parents’ money.

The night Gary Suter crosschecked him in the face (while he scored, because of course) and probably started his concussion problems that plagued him the rest of his career? I knew I shouldn’t have enjoyed it at the time, but I did. I loved it. I rewound the tape. But hey, I was only like 13 at the time (I would so do it now too, though, and I know this. I live amongst you).

He killed the Hawks as a Duck. He was always scoring the 6th and 7th goals on the Hawks in a 7-1 Predators win (and it felt like there were 103 of those in 2006 between the two teams). And you knew, just knew, the Hawks would never have a player like that because they were still married to the Keenan “Hit Or Die” philosophy.

The only moment of joy I got is when he and his salon buddy Teemu tried to job everyone and take cheap contracts to win a Cup in Colorado and it spectacularly crashed and burned. Man that was sweet.

Here’s a story from his time in St. Louis, provided by the old editor of St. Louis Gametime Sean Gallagher. It was when the Blues unveiled their third jerseys, and they have those laces at the collar. All the rest of the players at the unveiling had them undone, and were kind of playing with them trying to figure out what they should do with them. Kariya came out with his in a perfect, neat bow. That’s Paul Kariya.

And now it’s your turn. Email your stories to committedindian@gmail.com, subject “Most Hated Opponent.” And please, don’t do what some have done in the past and just send me a name. I’m not writing these up for you. You are. This is your chance to star on the blog. I’m betting you guys can knock this out of the park.