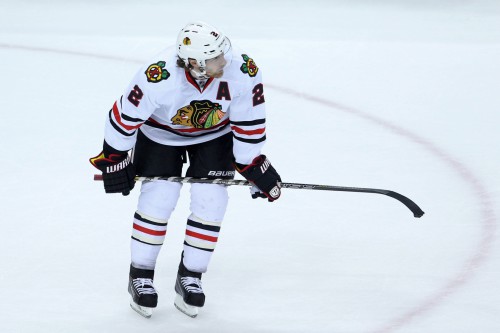 The Hawks got shut out tonight by Ilya Bryzgalov. Let’s let that sink in for a minute. And once it soaks in… um, can you bathe from the inside out? I guess we’ll all have to turn ourselves inside out and soap up that way.

Once again, the Hawks decided that a Game 3 wasn’t all that important. But honestly, I didn’t have too much of a problem with the first 40 minutes. In some ways it felt like a Floyd Mayweather fight. Work through the first few rounds, time your opponent’s punches, survive a couple hooks, and then slowly take away everything they do and move away in the later rounds when they’ve run out of ideas and tire.

The Hawks forgot the last part, though they did the first part ok. And they forgot the second part because of a couple lazy/non-aware plays.

The first goal sprung from a lazy and ill-advised shot from Michal Rozsival. Rozie got the puck on the point with no Hawks between him and the goal and three Wild players there. Both Kruger and Saad were waiting below the goal-line for the puck to be cycled again. Instead, he flipped a wrister so limp it might as well have been my dead grandfather’s member that was easily cut out.

This started a rush the other way, which in truth the Hawks should have had covered. But Kane lost Haula for just enough time (not sure it would have mattered as Haula is a much faster skater than Kane but considering Kane’s head start…) to bat home a saucer pass from Justin Fontaine.

The second resulted from more incompetent work after a center ice faceoff. I swear, the Hawks committed 87 icings in the St. Louis series right after center-ice faceoffs, and tonight they went the other way. Kruger lost Granlund in the middle, Seabrook was faked into a swim right along with Crawford. And that’s basically game.

Let’s get to the points:

-Let’s get this out of the way now. The Hawks didn’t lose because Q decided to scratch Nick Leddy tonight, though it probably didn’t help. It’s just a strange time to “send a message” to a player. Does Q think the Hawks are in such control here? Because this isn’t last year where the Wild are totally outclassed. Look what happened when allowed to get off the mat last series. Look what happened when the Hawks were allowed to get off the mat last series. And I’m sorry, I must be watching the wrong games where Leddy has been consistently awful. Sure, he had a rough Game 3 against St. Louis. He greatly improved after that. I really don’t see what was so bad about Game 2. It feels like the last game in Colorado where Q decided to bring Raanta in after not playing for nearly six weeks, watched him give up a bad goal or two costing them the game and basically the division. Was it worth the point you think you proved, Q? Was it worth it to not have your best netural zone buster in a game that tight through 40? Was it?

-Here’s my bigger annoyance: One of the Wild’s better players in Corsi tonight was Clayton Stoner. The Hawks aren’t getting at third pairings. Why? Because they keep seeing Handzus, Bollig, and Versteeg. The Hawks aren’t getting scoring from four lines, and they aren’t getting it from three unless Brandon Saad decides he’s going to do it himself (Marcus Kruger hasn’t done much lately). I don’t know why Nordstrom has earned this much trust, and Morin can’t get in over Bollig. But this is a rant you’re all tired of and I’m tired of writing. It’s just so annoying to watch the Hawks choose to do this when they don’t have to. I guarantee a 4th line of Versteeg-Regin-Morin would give you a whole lot more than this dreck. The Hawks don’t have a goal from their bottom six this series, as Brandon Saad’s in Game 2 came right after a power play ended. You can’t win with two lines, at least not farther down the line.

-The puck support in the offensive zone tonight was terrible. One forward taking on two guys with the other two forwards tapping their feet waiting for their overmatched teammate to get him the puck. I understand being conservative, but even when down the Hawks didn’t rectify this.  Improve that, please.

-Maybe it’s a different game if Keith hits twine instead of post on the 1st period power play, but that’s a stupid game to play.

-Whenever Patrick Sharp feels like arriving this series, I think we’re all on board.

-This will not be a night Michal Rozsival will want to remember. Say, could he be partly responsible for the way Leddy has apparently looked?

-This was yet another sleepy playoff game to go with the other two that were sleepy. The Hawks have definitely shifted down a gear so far, and they’ll have to find it on Friday to avoid being a lot more in the muck than they’d like or should be.

It’s hardly disaster, but this isn’t last year’s series either. Then the Hawks to got to play the way over his head Kuemper in Game 4. Bryz should be in over his head but not when you don’t make him work for much. This is also a better Wild team that already has a taster for coming back in a series. If the Hawks think they can just roll it out there in Game 4 and win, they’re sorely mistaken.