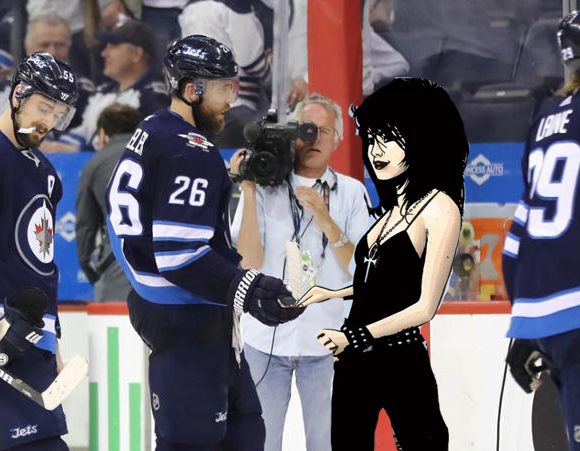 You Get What Anyone Gets: Saying Goodbye To The Winnipeg Jets

The Canadian drought for a Cup goes longer. But the drought for Canadian cities with an airport had died in the first round anyway.

The Winnipeg Jets saved us from yet another flurry of stories and videos about how “NASHVILLE HAS SUCH A UNIQUE” atmosphere from Canadian writers who forgot the place existed from last spring. so we thank them for that. They also punched a variety of holes in the Pekka Rinne myth, and then watched the puck squirt through them for all the goals they would need. So we thank them for that, as well.

But in the end, they couldn’t save us from the new golden children, and we scorn them for that. And now that flurry from last spring will be replaced by a bunch of oh-so-clever headlines from pale-ass Toronto writers like, “Did You Know You Can Have Fun In Vegas?” or “Hey There’s Gambling Here!” or “Steve Simmons Gets His Ass Kicked In By Stripper.” Thank you very fucking much, Jets. We just can’t wait.

In all honesty, this has been a long time coming for the Jets, who should have been at this stage at least two years ago had they not kept trying to foist Ondrej Pavelec on the world in some elaborate prank/gaslighting to convince us all that we don’t exist. What’s that? Ondrej Pavelec? No, he’s totally real. I’m serious. He was their starter for years! Really? Yes, he probably works in a garage somewhere now smoking unfiltered cigarettes before a woman in white pants yells at him for five minutes. Oh, apparently he plays for the Rangers. Same thing.

Anyway, Pavelec or Michael “Hanging In There” Hutchinson always combined to torpedo this uber-talented Jets team year after year. They got some help from Paul Maurice of course, whose philosophy before this season was “MEAT!” The Jets routinely were the dumbest team in the league, and compounding that was they had one of the worst penalty-kills to go along with all those penalties they took as Pavelec looked like being attacked by bees in net while Dustin Byfuglien looked on with an expression on his face that said, “Can you get sick from combining Butterfingers and popcorn?”

Ah yes, Byguflien. Big Buff. DAT BIG BUCK GUY. Once again became the darling of hockey analysts everywhere because he banged in a few goals, pried multiple guys off a scrum who weren’t really doing anything anyway like he was a bouncer at a Harvard bar, and had a few guys try and check him and rebound off the creamy-nougey of his middle. You have to hand it to Buff, he’s excellent at PR because all of those things distract from the three to four times per game he would get caught ahead of the puck before it had even exited the Jets’ zone and he’d have to scramble back. Ha, Buff “scrambling.” There’s a term for you. Right up there with, “Roenick thoughts.”

Anyway, Maurice got away from that this year, as you can’t really ask any coach to take less than four fucking seasons to figure out that he has one of the most talented forward groups in recent vintage and should probably get them to play at evens and the power play as often as possible. It’s a lesson in patience, or dumb luck, as Maurice probably should have been fired two years ago but got to hang around long enough to try this experiment called, “sticking to hockey?” The pinnacle of coaching these days is basically not getting in the way when you have four lines full of skill and Jack Roslovic just waiting around.

And yet it wasn’t quite enough. Maybe it would have been if Patrik Laine’s 1000-yard stare and misplaced beard from the Amish grandmother in Kingpin had been anything more than a passenger for most of the playoffs. Hey Patrik, you’re allowed to do more than wait around for a one-timer. What is it about guys named Patrick? Laine could spend the summer under whatever bridge in Finland he lives going over film of various Knights knocking him off the puck, except there isn’t enough time before training camp.

The Jets might think they’ll be here every year, but the bills are coming due. Trouba, Connor, and Laine are all do extensions in the next year, and Trouba has already tried to escape once. And maybe Blake Wheeler wants to ply his trade somewhere that doesn’t require travel by tauntaun. Paul Stastny says he wants to say and that his family is all for it, proving that either Paul Stastny is drugging his family or literally anywhere is better than St. Louis even when you’re from there.

So this might have been the Jets chance. A first-year team in their way before a chance to play for the Cup. You can’t ask for more…and then Byfuglien skated right by it. Meanwhile, the “loudest building in the league” sounded like a Joni Mitchell soundcheck for the last 40 minutes. You guys want to chip in and maybe inspire? No? Ok cool, go whatever it is you do in Winnipeg for the summer then, which I assume is a whole lot of log-rolling and trying to hit each other with rocks. Oh, and reading Hawks fanfic about trading Toews back there, because that’s something our most unwashed dream about. And in the coming seasons we can get more video packages about the “rivalry” between the Jets and Oilers from the past, where all the old Jets talk about how much they hated the Oilers and Gretzky and Messier respond to questions about it with, “I’m sorry, who?”

It could have been more. It probably should have been. But hey, you’re Canadian. Only so much can be expected. As always, the real cities will take home the real baubles now.