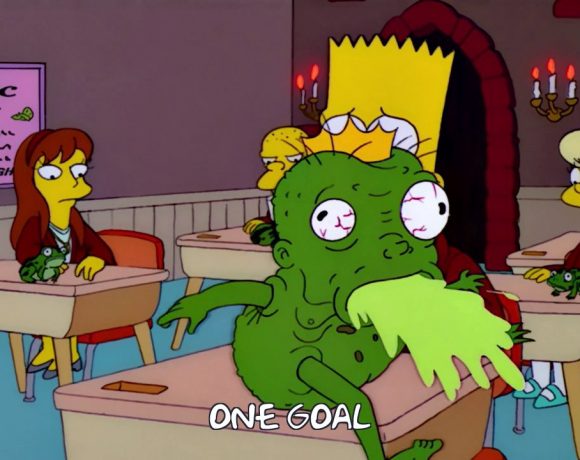 Blackhawks Open Camp, Are Covered In Puke Within 10 Minutes

People, as I’ve shared in the past, I used to be a comedian. And never, in my seven to eight years of dedicating my life to trying to write stuff to make people laugh, did I ever come anywhere close to anything as absurd and uproarious as the opening hour of Blackhawks training camp this morning. Yes, I use the featured photo a lot, but you sum it up better than that!

Where to even fucking start? So yesterday, company and television stooge Pat Boyle “reported” that Corey Crawford would hit the ice today. He didn’t say in what capacity, if he was just going to check that he in fact can still skate at all, or would be just touching up the logos painted under the surface. This was clearly the Hawks attempt at…

So Crow did actually hit the ice, and he did actually practice…just by himself. Which is…something? I mean it’s better than nothing. It’s on the road to full participation, it’s just that no one has any idea how long that road is. But hey, he’s alive and he’s wearing gear and that’s like, a step forward from where we’ve been. Maybe. Unless he disappears again tomorrow and/or this was all for show. Good stuff, really.

Oh, but it gets so much better.

Right about the time the Hawks were hitting the ice as a team, it was announced that Connor Murphy is going to miss two months with a back injury. TWO MONTHS. BACK INJURY. Let’s try and unpack this all, because it’s a fucking ton and ain’t none of it good.

So, this summer, Stan Bowman hoarded all of his “assets,” such as they are, and decided against upgrading a blue line that was rat semen anyway, because the Hawks are terrified of what they have to pay Nick Schmaltz and Alex DeBrincat in the next two years (no really, that’s the reason). Except there’s no fucking chance Murphy showed up today and said, “Hey I think my back is fucked up.” For it to be a two month thing, they have to have known about it for a while, and still elected to present you with Brandon Manning and Jan Rutta. TICKETS TO THE HOME OPENER STILL AVAILABLE, PEOPLE!

So essentially, what the Hawks are telling you while hoping you don’t notice their lips are moving, is that they know they’re going to be a dungheap this season. Because if you thought you had a chance at being anything, you wouldn’t just toss your hands up at the news that your most consistent d-man of last year was going to be out until December basically, yelling, “Dems da breaks!”

Going further, you wouldn’t do that if your thought your team has any hope of being anything other than a representation of sadness and confusion in watercolor because back injuries of this significance to a player who is, y’know, 6-FOOT-FUCKING-5, have a tendency to be career-altering, if not debilitating. That’s a major, major problem that the Hawks thought they could just sneak by you.

Oh, and Brent Seabrook is going to miss a week with an “abdominal injury,” which simply just has to be a really unruly burrito.

The capper of course is that at the first practice Chris Kunitz was skating with Jonathan Toews and Alex DeBrincat, which couldn’t be a more Quenneville moment unless it came with a bottle of wine, a Whalers jersey, and a mustache painted on the ice. TICKETS STILL AVAILABLE

If there’s a silver lining to all of this, and there isn’t, basically Quenneville is going to be forced into giving Henri Jokiharju a long look because there ain’t shit on shit else. And he was already skating with Keith today, so fuck it, let’s ride that snake as far as it’ll go and figure out the rest later. Or never. Probably never.

So just to review, when the Hawks open the season, your pairings could be a declining Keith with a 19-year-old the coach will hate, Sbarro and Jan Rutta, and The Guy Worse Than Radko Gudas next to Cowboy Gustafsson.