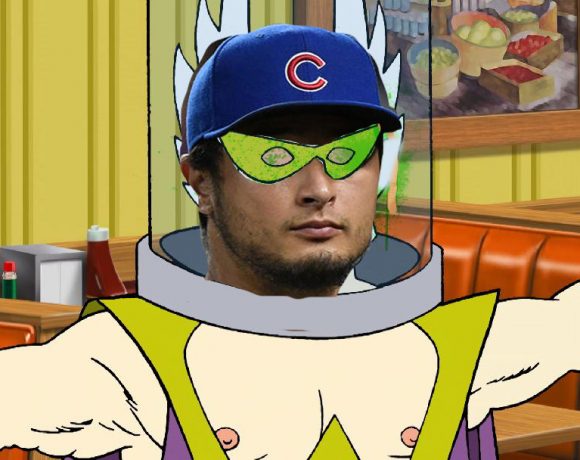 Actually, it was the reverse for Yu this season. He was fighting it for most of the first half of the season. Then he was able to locate his fastball, started throwing a knuckle curve simply because he thought it would be fun, and put up some of the more ridiculous numbers you’ll see. Unless you think a 17-to-1 K/BB ratio in the second half isn’t ridiculous. There is some noise in there, and it’s hard to know what exactly the Cubs will get moving forward here. But let’s try and pick out what we can.

Tell Me A Story: So yeah, the big thing with Yu was the split between his first half and his second half. He had an ERA over five in the first, and 2.76 in the second. We could keep going with these stats, but you already know the deal here. Yu stopped walking anyone in July, started striking out everyone, barely gave up a hit as he had a WHIP of 0.81 in the second half. So yeah, that WHIP, that ERA in the second half, that K/BB rate over a full season puts you in Cy Young discussion. The question is whether Yu can do it over a full season. Maybe it’s best to try and find what changed to figure it out.

It’s a little hard to do that with Yu, because this crazy motherfucker throws like seven pitches. So he might go to one or two of them more often in one month simply because he’s bored or because it looks like one of his other pitches that he’s just changing the speed on. So his slider and cutter can get confused for each other, so can his curve and slider. Then a split and change and we could just go on here but before too long the room will be spinning.

In July, when things turned around, Yu started using his cutter about three times as much as he had before. It was his go-to pitch when he needed a strike. But in August he went away from it and not much changed. And then he went back to it in September. Yu definitely started throwing his curve in July and stuck with it for the rest of the season. And you can probably see why: 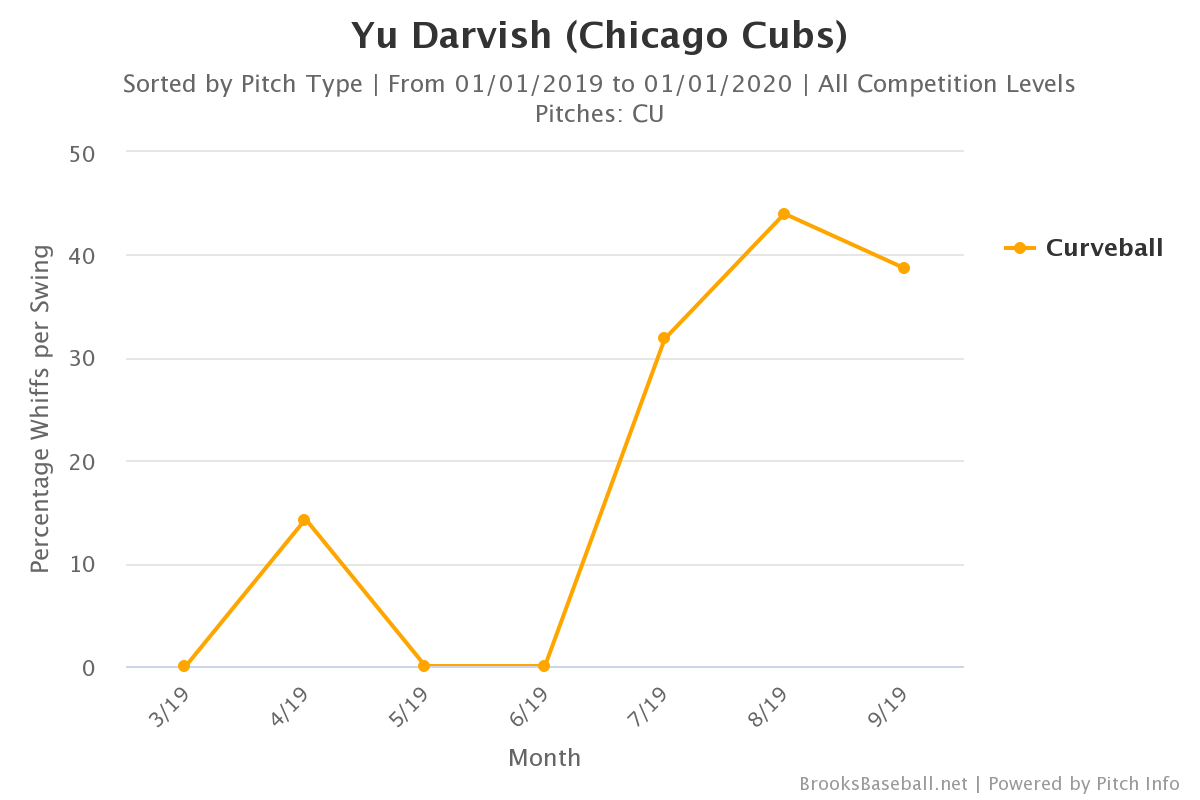 Which probably was due to this: 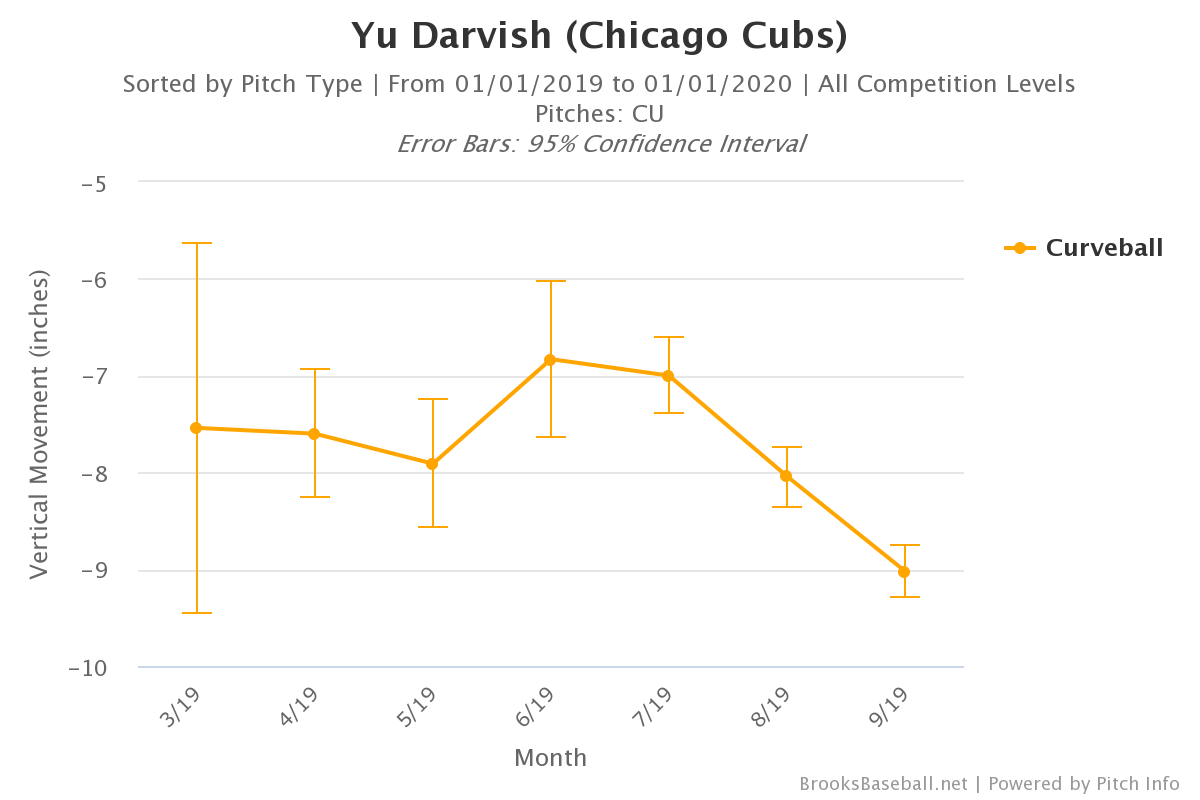 Clearly, picking up Craig Kimbrel‘s knuckle curve, mostly because he thought it was interesting, gave his curve more bite and something of a wipeout pitch. Or another wipeout pitch, as he’s got a couple.

Yu’s biggest problem was the home-run ball, as it was pretty much everyone’s this year. Yu had a HR/FB rate of 22%, which was miles beyond his career-high. Even in the 2nd half it was 19.7%, which is still very high. But as we said as it was happening, this is mostly luck. Yu’s hard contact-rate against was fifth best in all of baseball, so it’s not like he was continually getting crushed. He just watched fly balls, and some that weren’t even hit all that hard, continually float out of the park. This could simply correct because baseball is gonna baseball on you. He did give up a higher hard-contact rate on fly balls this year than ever before, but then so did pretty much every other pitcher on the planet.

If there’s one thing we can point to, it’s that Yu was concentrating his fastball and cutter a little higher in the zone a little more of the time this season. Which leads to more fly balls obviously…except that Yu had the highest ground-ball rate and lowest fly ball rate of his career this past season. Again, I have to chalk this up to weirdness.

And homer issues have plagued Yu before. He gave up 26 in 2013. He gave up 27 in 2017. He was giving up a homer per start with the Cubs in ’18 before getting hurt. It might just be his thing. If he runs an ERA around 3.00 while giving up a fair amount of solo homers, no one’s going to care all that much.

The usual luck alarm-bells only half-ring for Yu and his split season. His BABIP was actually higher in the second half, though .276 is lower than his career average and probably will come back a little. Except for the caveat of just how little hard contact Yu was giving up. Though that’s balanced a bit by the greater amount of grounders. Yu also had an 85.2% left-on-base percentage in the 2nd half, which is a tad high. He got some good sequencing there, and that could correct some next year.

Welcome Back Or Boot In The Ass: Well that’s up to him. Yu could chase more money this winter with his opt-out. But considering what the free agent market has been the past two winters, and he turns 34 next August, it’s hard to see how he’ll do better than the average for $20.25M he’s got now. And he hasn’t expressed any interest in doing so, though we know how these things could change when teams start whispering into his agent’s ear. Still, unlikely.

So the question for the Cubs is what can they bank on from Yu at 33. Can he be that second-half guy for a full season? You’d be asking for some career-best numbers in his 30s, which generally doesn’t happen. He’s probably not going to strike out over 13 hitters per nine innings again. But he’s consistently been over 11 for his career, which is what you’d expect. The thing is, his low-walk ways are the norm, not the wayward inflatable clown he looked like at times in the first half. He ended the season at 2.82 BB/9, which is basically where he was ’15-’17. He found a rhythm in the second half that he’ll have to keep.

It’s ambitious or more to expect Yu to be the #1 Power Cosmic he was from July on last year, because it’s not really what he’s ever been. But solid #2 or plus-#2 starter production is certainly in the wheelhouse. It’s not Yu’s fault the Cubs don’t have a genuine #1. If they get more than that, all the better.