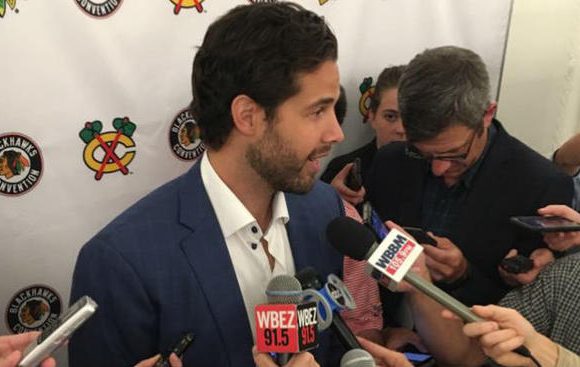 The Ballad Of Corey And Summer Break

It wasn’t that we were ever going to learn a whole lot from the Convention and when Corey Crawford appeared (forced to appear?). If anything it only added to the confusion, and pushed us to being more convinced that when he’s not ready for the camp, or even for the season, the Hawks are going to fully put the blame on him. And it sounds like that will be more and more unfair.

Let’s get the stuff on the ground first before we try and sift through the higher-concept stuff. After the season, both Stan Bowman and Joel Quenneville said that they fully expect Corey to be ready for training camp. Q referenced “reports” they get, though who these are from or what exactly they are, no one’s going to be able to tell you.  And if you’re even more confused as to why a coach would need a “report” on his own player you’d hope he had any kind of relationship with, I’m going to have to leave you in that body of water because I have no tow-rope of an answer for you. They’re might not even be any such reports. And what’s clear now is that neither individual actually spoke to Crawford himself. Which isn’t encouraging.

Because if either had spoken to Crow, they probably would echo what the man himself said. He said that it’s a possibility he could be ready for camp, he’s progressing, he hopes he is, but that he can’t promise that. He really has no idea. So why do the coach and GM? Why are they making pronouncements that clearly don’t line up with what the player himself is feeling? The only explanation is that so they can dump this on Crow when he’s not ready, except at no point did either Stan or Q say, “Corey has told us he’ll be ready for camp.” They just said it, based on these nebulous “reports.” And I guess they want us top believe either that they don’t have Corey’s phone number and can’t ask him themselves, they never called him, or he didn’t return their calls/texts. Quite frankly, it’s a load of shit and when the Hawks try and pin this on Crow you should be angry at them, not at the player.

It’s easy to understand the frustration of the ambiguity of this. But you also get the impression that Crawford and the Hawks are dealing with something not all that common, and that’s if we leave it as just head trauma. If he blows out a knee or requires rotator cuff surgery, we have some frame of reference for the recovery of that. What we clearly have entered into here is something that can’t be tracked or has little precedence.

It won’t do any good to dip more than a toe into the pool of simply wild rumors and innuendos about what’s going on with Crow (hmm, that’s a lot of water references. Doesn’t that mean death in dreams? I’m in some trouble here). Some of it is really out there. But if even a shred of them have some truth, then this is a deeply personal thing, and quite frankly we don’t have this right to know exactly what’s going on. Even just a head injury is personal in that A. recovery from it is completely dependent on the player B. the risks are so great. Perhaps some players can plow through the idea that their life will be forever changed after they’re done playing (and when you’re over 30 as Crow is that’s really not all that far away), but there shouldn’t be an derision of a player who is also considering that in their recovery to make sure they’re 100%. Considering all that Crow has already accomplished–two Cups, what should have been a Conn Smythe, a couple of Jennings’ trophies, a World Cup and representing his country–he could be forgiven if he spent a little time wondering if there was that much left for him to do and whether putting his long term health and happiness on the line was really worth it.

Quite simply, if Crow is dealing with more than that–and I have honestly no idea if he is and no one I know who is plugged is seems to either, but we all hear the same whispers from the hinterlands to the jackass at the rink bar–than the Hawks seemingly pinning this on him is wholly wrong. And it was wrong when they did it after the famous Rise Against show, though they might not have known everything they were dealing with then. If there is something personal at work here–and again, I have no idea if that’s the case–I don’t see how saying one thing about him and then having him to at least tamp that down himself so that he looks like he’s not living up to expectations helps him in any way. It shows a nearly unconscionable lack of understanding. And maybe from that Rise Against happening there’s always been a separation between Crow and the Hawks and a lack of trust from both sides.

And I don’t know what the point of having him at the Convention was, either. There isn’t anyone who is or isn’t going to buy a ticket to that museum of freaks based on whether Crawford is going to be there or not. Having him there means he’s going to have to talk, and this is a situation where more quotes really aren’t going to help. And if he wasn’t going to parrot the message the Hawks have been sending out all summer, why did they send out that message? At least Crow knows he’s important enough that he doesn’t have to go along with what they’ve said about him, but this is yet another thing the Hawks have completely borked and ended up with several substances on their hands and no handiwipes around.

Sure, Hawks fans are getting a bit riled because there’s so little information we can trust out there. But at the end of the day, is it really our business? Do we have that “right?” I don’t think we do, especially when it comes to certain ailments or problems. If the Hawks were going to be vague anyway, they could have protected Corey better by saying something more like, “He’s dealing with a serious injury/matter/issue/whatever, we and him both hope he’s ready for camp but the most important thing is that Corey takes care of himself, and we support him fully in whatever he feels he needs to do that.” Instead we get this, team and player saying different things and no one knows where to turn. How is this better?

-So this is the point where things will go a bit dark around here. August is clearly the dead month on the hockey calendar, and we could all use the a break. If something happens, we’ll of course write about it. If Hess wants to bitch about Colts training camp, and you know he does, he’ll write about it. If Pullega needs to put a curse on all of us, he’ll do that. If Rose finally wants to reveal she’s Chicago Party Aunt, she’ll do that. But for the next few weeks, let’s say things will be sporadic so that we feel a bit more freshened up for training camp and season previews and all that good stuff. But don’t you worry, our Bears Roundtable before the season starts will of course be done. Anyway, take care and we’ll talk soon.