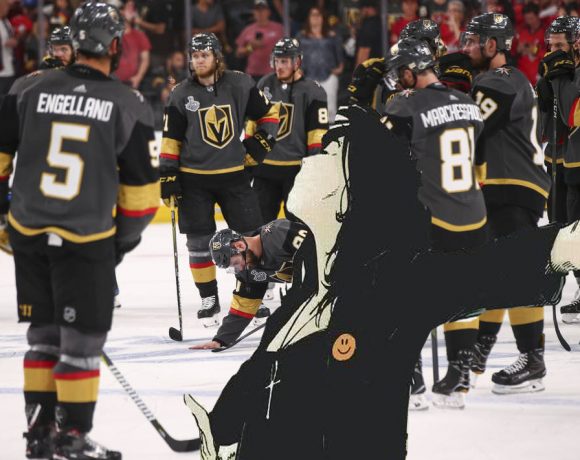 You Get What Anyone Gets: Saying Goodbye To the Vegas Golden Knights

In the end, what everyone hated or loved about the Vegas Golden Knights is that they were a mirror. When you watched them, you saw everything that this league is, good and bad.

On the bad side, the Knights exhibited for all that basically, no one knows shit and that it can be totally random. While those in the media were so quick to dub George “Tiger Punch” McPhee a genius–this being the same guy who hired Dale Hunter and Adam Oates in Washington, thus ruining a good three to four years of Alex Ovechkin’s prime–all he did was take advantage of a system that wouldn’t allow GMs to keep all the talent they’d drafted. And that system was in place because too many teams were too dumb to acquire a lot of talent. Sure, he was able to grift a couple GMs who had gone to cottage to huff white-out a bit early (hi Dale! Hi Bob! Say, why did all these guys used to work for the Hawks?), but it wasn’t he who conjured a .928 season out of Marc-Andre Fleury or a 25 SH% out of Wild Bill Karlsson (and we here eagerly await Karlsson’s 22-goal season next year with only 648 articles entitled “What’s Wrong With William Karlsson,” which of course no one will say the answer is “He’s William Karlsson, for fuck’s sake).

No, when you watched the Knights it became clear just how random the sport is. Find a goalie or two that spasm a .925+ SV% for no reason other than the gods enjoy a good chuckle now and then and a couple guys to shoot the lights out and you’re halfway there. Throw in some spice of being in a division where every goddamn team is built to be “tough to play against” (i.e. dumb and slow) and just skate by them and then anything can happen. A few bounces, a few one-goal wins, and suddenly you’re the most magical team this side of…. well, any MLS expansion team.

And if you can garnish it all with the fact that apparently no NHL player had ever heard of Las Vegas before, and every opponent showed up to your arena looking like Mia Wallace after she got into Vincent’s coat pocket and well, the sky’s the goddamn limit, isn’t it?

Watch the Knights long enough, and unless you were a fan of a certain few teams, you could see just how stupid your team was run. The Knights ran over the Kings, who are on their fourth consecutive season of trying to ice a rec rugby team, and then they could tell everyone they play rugby within the first three minutes of any conversation because that’s apparently what rugby players do in this country (and if you ever meet a rugby playing vegan, run for the hills, friendo). They got to show the Sharks just how old they are, as Pete DeBoer replaced their only young d-man with whatever wasn’t falling off of Paul Martin, and whatever was.

Then came the Jets, who actually rolled them for a fair amount but Fleury snorted an infinity stone or something and everyone chalked it up to “magic.” Of course, a series later and everything looked exactly as it did against the Jets except Fleury was doing a reasonable impression of muppet running an Iron Man (i.e. being Marc-Andre Fleury circa 2010-2016) and suddenly they’re getting their magical, Cinderella ass paddled (insert your Cinderella pansexual fanfic here).

And yes, even the architect of all this, Gerard Gallant, had his brain drip out his ear in the final round. Anyone who’s surprised by this must’ve never watched him play for the Red Wings, where during his 11-year career he actually touched the puck 12 times. But hey, this is the NHL, if you’ve got a leathered up face, were a grinder once upon a time, and have some sort of weird nickname, the press will slather you in their saliva. So there’s Jack Adams winner-elect putting out Ryan Reaves, not once but twice, as the extra-attacker when down a goal. Why? Because he had managed to rhino-hump his way into two goals into two games. I’m sure James Neal didn’t consider Marty McSorley-ing his coach at all during this stretch. He scratched David Perron, who granted really does suck but did manage to put up 66 points this year in a series where no one but the top line could do anything other than stare at the lights. And this is the best coach during the season. #EndHockey.

All of it led the hockey world declaring Vegas as the best new hockey market, and you’re not really a hockey town until Pierre McGuire declares “I haven’t heard a building this loud all spring…” and then NBC edits out the part where he concludes that sentence with, “…except for Mississauga last week when they were playing Sudbury!” Give the ash-white Canadian media three days anywhere where it’s warm and has running water, because wherever they’re from assuredly doesn’t, and suddenly you’re Hockey Mecca.

While the pregame antics were cute, much like every other Vegas act it’s going to feel camp real soon. Especially when this team has 92 points next year at best and Fleury’s SV% is .907. Sure, Vegas is going to be a free agent destination given it’s lack of state income tax and the climate. How’s that working out for the Panthers? Your glorious pre-game Knight stabbing some dude waving a flag (how tough!) is going to look a little different when it’s in front of 9,000 Flames fans and that’s it.

So thank you, Knights, for showing everyone what we all knew about the league and hockey all along. It doesn’t make sense, there is no system to it, and just about anything can happen. And it’s going to happen to you soon, like trading Karlsson for a 2nd round pick at best in two years.