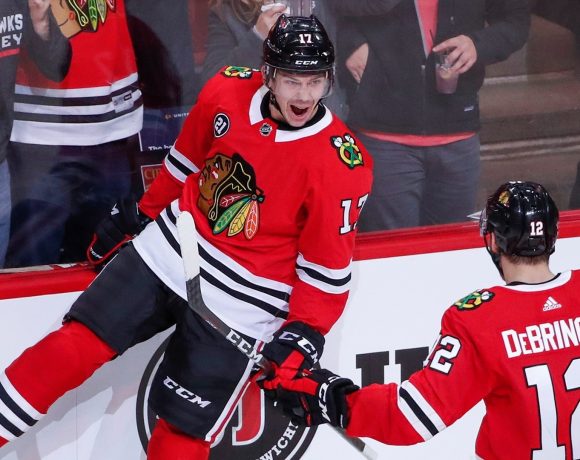 A couple of weeks ago I read a metaphor that was being applied to a certain quarterback of a certain local football team, but as I thought more about it, could also apply to Stan Bowman. Ol’ Stan is like golf – you can play up-and-down golf for 17 holes, constantly battling relief and frustration with your own shots, but then you approach your second shot on 18 and crank it 3 yards short of the pin, and think to yourself, “This really ain’t so bad. I will come back and do it again because I am good.” Bowman has had plenty of hits and misses in recent years, but the Dylan Strome trade is that birdie-on-18 that makes you think this guy really does still have the good GM inside him.

*all stats are with Hawks

A Brief History: Strome was widely considered one of the top prospects in hockey for a few years after being picked third overall in 2015, after Connor McDavid and Jack Eichel. The only problem with that sentence is that generally, guys picked that high in the draft don’t remain “prospects” very long. It’s plenty understandable for a No. 3 pick to not be in the NHL right away (we may even see that with Kirby Dach, but I digress), but that Strome couldn’t even carve out a regular role for himself on the 2017-18 Coyotes seemed a bit problematic. But Stan and company clearly saw something there – probably the utter lack of quality forwards to pair Strome with in the desert – and realized that John Chayka might be analytically inclined but he’s still a huge dumbass, and was go get Strome and Brendan Perlini for Nick Schmaltz.

The change of scenery was huge for Strome, as he got to pair with his old OHL teammate in Alex DeBrincat, and those two were joined by some guy named Patrick Kane. Strome’s production took off from there, and after having just 3 goals and 6 points in his first 20 games of the season in Glendale, he came to Chicago and produced at a near point per game pace, with 17 goals and 34 assists giving him 51 points in 58 appearances. There are some concerns about those relative CF% and xGF%, but if he can take a step forward in the production, it will help mitigate some of those.

It Was the Best of Times: Strome having a full offseason and camp as a Hawk and being able to get more familiar with Jeremy Colliton‘s system and his teammates results in a huge boom, and he launches himself toward the ceiling that many teams and scouts saw and dreamed on when he was in the draft. Playing in the full 82, Strome steps his production rate to just above a point-per-game rate, and gives the Hawks 90 points from the “second” line. In the process, he solidifies himself as a candidate to be the top center on the Hawks moving forward, and the future looks much brighter for the pivots in Chicago. Oh, and he signs a contract extension with an AAV below $9M.

It Was the BLURST of Times: Strome reverts to the guy he was in Arizona, and solidifies himself as one of the bigger NHL busts in recent memory. Despite playing with Top Cat and Kane for most the season again, he just can’t find a scoring touch and somehow manages to just never be involved in goals by other of those two. He ends up with just 40 points on the year, and the shot and expected goal shares get worse in the process. His feet also morph into literal cinderblocks.

Prediction: I tweeted at Pullega the other day that this season, 12-17-88 has a chance to be A) a whole lot of fuckin’ fun and B) the most productive line in hockey. Kane is a near lock for 90-ish points and 100+ is completely reasonable. Top Cat is gonna give you 70+ and maybe can get into the 90+ range. Strome is the biggest question mark on the line, but I think that playing with those two a lot, which he should and hopefully will, will result in at least 60 points, even by accident. If he becomes an active participant in the production on that line, which I think he will, he can get 80 points himself and potentially even the 90 I mentioned in the Best of Times. My official prediction for Strome – 27 goals, 81 points. Combining that with my 43 goals and 83 points from Top Cat and 45/108 from Kane, we have one line accounting for 115 goals and 272 points. Am I optimistic? Yes. Am I crazy? Maybe not. But I know two things – that would indeed be in the running for most productive line, and also that may still not be enough for the Hawks to make the playoffs, because hockey is fucked and the Hawks blue line might be too.