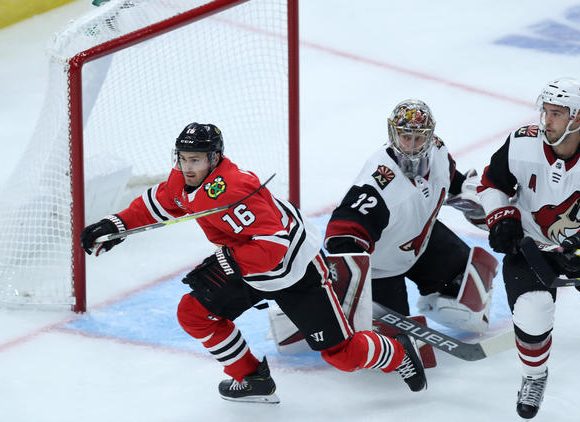 So the Hawks have lost a game in regulation. They’ll probably lose many more. And in truth, last night wasn’t anywhere close to the worst game they’ve played. Couple posts, Antti Raanta being what Antti Raanta is now which is weird, and the bottom of the roster letting you down. It happens.

So let’s barge through a couple notes before adjourning for the weekend.

-I’ve mentioned on the podcast, but there’s a school of thought in baseball when it comes to free agency that you either go top shelf or well on your choices, and you don’t mess with the in-between. Because those players have the greatest variance, and if they don’t work out you’ve committed far too much of your budget to them. Whereas if your well whiskey players don’t work out, you’ve still go payroll flexibility to make up for that.

In hockey, the only sport with no exceptions and the hardest of hard salary caps, this might be even more important. While a policy like this employed by every team would freeze out even more middle-six and middle-pairing veterans than it already does, when building a team it might just have to be that callous. Even just a couple of mistakes and your cap is tied up with nowhere to go, and as we all know it’s the players at the top of your roster who make all the difference despite hockey’s undying need to glorify the artisans instead of the artists.

This is what bothers me so much about Brandon Manning. He’s not a bargain-basement signing. While $2.2 million is not a ton of money, it’s significant. Or at least it’s enough to notice. The Hawks nearly doubled this goober’s salary from last year, and I can’t even fathom whom they were bidding against. I can’t sit here and tell you what the Hawks might have done with that extra million or million and a half, but I know it could have been better than this. And it might be the difference to whatever they want to do midseason.

Especially when you’re talking about a third-pairing player. That’s not a middle-pairing player, no matter what you’ve deluded yourself into seeing as the Hawks clearly did, that you think you might get a bargain on. When opting for third-pairing players, you should go cheap and mobile as often as you can. If Jordan Oesterle has been restricted to this last year, not nearly as many would have minded. And I’m sure Brandon Davidson is just another word for Oesterle, but he can’t be worse and he’s far cheaper and more mobile. Go around the top teams in the league and you won’t find too many spending this much on a third-pairing guy, aside from the Penguins and Jack Johnson because there are a lot of fumes in Western PA.

Let’s say instead of avoiding the middle of the market, which we’ll give a wide range of $2-$6 million per year, when you commit those contracts you have to get them right. Look at the Oilers, who have at least gotten four of them wrong and see how badly it can go.

Somewhat luckily for the Hawks, they can probably rectify this if they want. While the thought has been that Gustav Forsling will head to Rockford when healthy, seems to me they can put him in the third pairing role he’s been cut out for. Fuck, pair him with Davidson and at least make it a mobile pairing. I don’t really care what it produces as long as it could move, and I don’t really care what happens to Rutta or Manning.

This would have to cause a shift in usage, as Joel Quenneville has been loathe to start Henri Jokiharju anywhere but the offensive zone, but there seems to be little choice. Burying Jan Rutta and Brandon Manning there has gotten you…well, this. Q hasn’t helped matters by putting Manning and Rutta behind Anisimov and Kunitz the most, which is just aching to get killed. There is probably a shift there needed, too.

-This is probably not pointless thanks to this morning’s practice silliness, but whether he liked it or not Q did stumble upon what could have been a nifty third line. Though he hasn’t played them enough, Brandon Saad–Marcus Kruger–David Kampf have killed the competition in two games. And they’ve done that while starting almost all of the time in the defensive zone.

Look, a checking winger who scores a touch more than most checking wingers (if he does score again) is not what you envisioned for Brandon Saad. But what you did want was a line that could keep your top six away from the hardest competition. For now, you have that. And it was quick and was creating chances.

Sure, it leaves a hole on the top six on Schmaltz’s and Kane’s wing (which once again Q appears to want to fill with Schmaltz himself and give us monolith Anisimov in the middle and I’m so tired of crying), but that’s ideally where the kids they’ve talked up, Victor Ejdsell or Dylan Sikura, are supposed to go. And if neither of them are good, then none of this matters anyway.

Our worry with the Hawks all preseason was that they had two lines. They’re staring a third right in the face, at least temporarily. Don’t worry, Q might get back to it by the 2nd period in Ohio tomorrow.