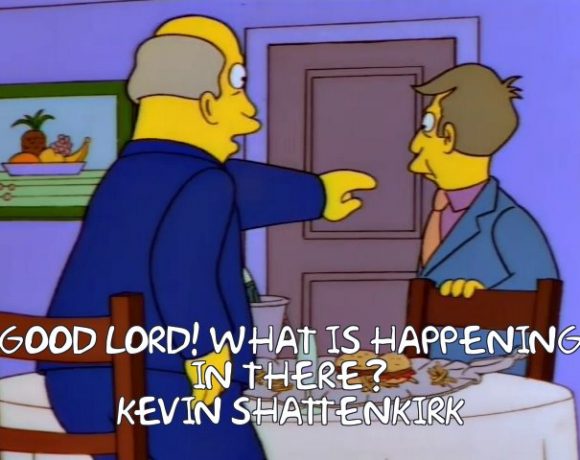 Game #49 – Hawks vs. Rangers Spotlight: Good God, What Has Happened To Kirk ShattenKevin?

We know that it’s hockey tradition for the Rangers to sign a big-ticket free agent and then watch it turn into ash in their mouth instantly. It’s generally the way things have been since they signed three-quarters of the 80s Oilers to win their one Cup. In fact, maybe it’s penance for that. Chris Drury, Scott Gomez, Wade Redden, Nikolai Zherdev (though he was a trade), Eric Lindros, one of their Alex Kovalev trials, we could go on. Any hockey fan could probably recite the list. This is why we can’t wait for them to go against the grain of their rebuild, sign Artemi Panarin for $11 million a year, and then watch him score 22 goals per year after they scrape him off the pavement in Dumbo twice a week. It’s what the gods want, it’s what they require.

So Kevin Shattenkirk is just another in a long line. But man, this went pear-shaped pretty badly.

It was no secret that Shattenkirk wanted to be a Ranger. He’s from Connecticut, grew up a fan, and it’s a main reason why the Blues shipped him off in his free agent year to the Capitals. It has not gone well.

Shattenkirk missed half of last year through injury, though his 23 points in 46 games is just about what you’d expect from him. He’d been a consistent 40-45 point d-man in St. Louis, But this year…egad. Shattenkirk has played in 38 games, but has only amassed 11 points and just two goals. He’s never been a bastion of health, playing 81 games just twice in his career and missing 36, nine, and 26 games three of the past four seasons. But this production is just putrid. Stanky. Pungent, as it were.

So what’s going on? Well, it might not be as bad as it looks on the surface.

One, Shattenkirk is on a wretched team at the very base of a rebuild. So even if he were Paul Coffey circa ’85, there aren’t a lot of players here who can consistently bury whatever chances he’s creating. So let’s get that out of the way. And relative to his team, Shattenkirk is driving the play just about as well as he ever has. His +2.95 CF% relative is among the best marks in his career. His +2.47 SCF% relative to the Rangers is among his St. Louis numbers, though not among his best. Same story with his +5.94 relative in high-danger chances. Shattenkirk is still getting his team to the other end of the ice and the good areas better than any other d-man on the team. And he’s not getting the benefit of extra offensive zone starts, as his 59% mark this year is just about his career-average.

It’s hard not to see his personal 2.7 shooting-percentage as a blinking red light, as that’s half of what was his previous career-low. That’s one problem. Overall, the 7.9% the Rangers shoot while he’s on the ice is just a touch below what his career has seen, but nothing scandalous. It’s the power play that’s the problem. Namely, the Rangers couldn’t find their dick if you put neon lights and a buzzer on it when they have the man-advantage. The Rangers are shooting 5.9% when Shattenkirk is on the power play, and that’s almost a third of his previous career-low. This is a player who routinely racked up 20+ power play points per season, and that was with the wayward children of Missouri. This is almost criminal. And the main reason that Shattenkirk has all of three power play points.

Which sort of has us dreaming of a bad-contract swap, although we admit this is about as drug-addled of a fantasy as you could imagine. The Rangers would probably love nothing better than to get out from the two years remaining on Shattenkirk’s $6.6M hit. And he does have some value if you can put him on a team with other talent, not just placeholders and others who simply got lost at Penn Station who then had a jersey and pads tossed on them. He may never live up to that contract, but he doesn’t have to be in the wilderness either.

In a fantasy world, you could convince Brent Seabrook the cuisine in New York just has to be tried for a full season, throw in a pick or a prospect, sell the Rangers on “veteran leadership” for a young team, and take Shattenkirk in return. A new CBA/lockout in two years is going to arm everyone with compliance buyouts anyway, so the Rangers wouldn’t have to sit with the remaining 43 years on Seabrook’s contract anyway. And the Hawks could have what Erik Gustafsson is trying to be anyway, though with more mobility.

But that won’t happen, and the world won’t collapse if it doesn’t. Maybe you can’t wash off Rangers stink anyway.