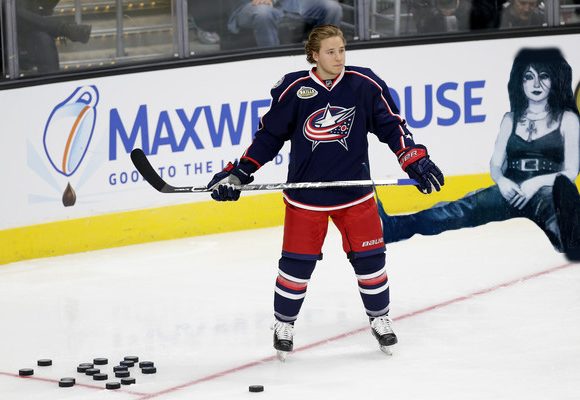 You Get What Anyone Gets: Saying Goodbye To The Columbus Blue Jackets

Since the NHL was measured in A.L. years (After Lockout ’04-’05), there are only three teams that have never won a playoff series. One is the Toronto Maple Leafs, you may have heard about them. One is the Florida Panthers. You probably haven’t heard about them, but I assure you they exist. And the other is the Columbus Blue Jackets. That will continue for another year, as the Jackets actually found a way to make the Washington Capitals look mentally strong. Perhaps they will be given an award for this, or certainly a commemoration of some kind, because they are the first to do so.

And looking over the entire history of the Jackets, this very well might be the only accomplishment you ever remember. Their other claim to fame is that they were the throw-in for the league to placate the Red Wings and move them to the Eastern Conference, which they’d only been bitching about for a decade and a half (and perhaps knew it was the only way they could maintain their then-pointless playoff streak). Essentially, the Jackets are the first team to be the “Player To Be Named Later.”

And really, that’s it.

The Jackets have strung together two good regular seasons, though both have been of the “hockey weird” variety. Last year it was a power play and Bobrovsky combining to see them eclipse 100 points. This year it was Bobrovsky and eventually the power play, though more sustainable success at evens as well. And it got them 100 points. And what it got us was a feeling that 100 points for a team doesn’t really mean anything at all.

What must be so infuriating for the Jackets is that they actually did a lot of stuff right this year, and it still doesn’t matter. They figured out Brandon Dubinsky sucks and has for a very long time. He barely played 10 minutes per game towards the end. They concluded that maybe Nick Foligno wasn’t all that good either, despite his heart and grit captaincy, and was on the third line. They discovered that Jack Johnson has always sucked and punted him into the pressbox when he started bitching about a new contract (or debt-servicing). For John Tortorella to come to these conclusions, one would have to start believing in a higher power.

And it didn’t matter.

Certainly Artemi Panarin turned some heads in the first three games, with two goals (including a gorgeous OT winner) and seven points to go with seven shots. He then didn’t scratch again when things got tricky in the next three games, was a -6, and there went any offense Columbus might have thought about having. Hmm, strange that. Doesn’t sound familiar at all.

And this is probably as good as it gets for the Jackets. They’ll have to give Ryan Murray and Boone Jenner raises this summer, even though no one can identify what it is they do exactly. That will eat up whatever cap space they have, as well as keeping their powder dry for when Panarin gets $10 million a year after what is assuredly going to be a nuclear free agent season next year. Good thing they have $11 million combined tied up in Dubinsky and Foligno. The going rate for guys who growl a lot is astronomical, isn’t it?

You can feel Torts burnout coming next year as well, because that’s how this works. Lucky for the Jackets, and Tavares-less Islanders team, a stunting development from the Devils, the Hurricanes collapsing under the weight of their bellicose owner, and a clueless-how-to-rebuild Rangers team are probably going to Homer-sperm themselves out of taking the Jackets playoff spot.

Which will give Sergei Bobrovsky another chance to spit up all over himself when everyone’s paying attention. Once again, this two-time Vezina winner spent a lot of time looking like the morning after on Bourbon St when the Jackets needed him most. A .900 SV% to slightly better his .882 from last year. We should also remember this is the asshole that made Timothy Leif a household name, so why did we ever give him any shine in the first place? At least there will be some hilarious trade rumors after next time. He just has to go to Toronto, right?

So thanks, Jackets, for whatever it is  you do. Also Columbus is a strangely redneck stinkhole and deserves nothing good. Thanks for providing exactly none of it for them.