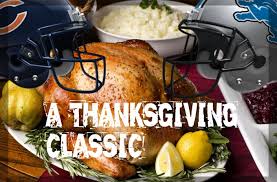 Week 13 Bears at Lions Spotlight Matchup: Not Much To Be Thankful For

By Wes French November 27, 2019 805 0
Tony: I’m thankful for you, King. You have bestowed upon me the right to not have to talk about the Bears for one more day, and that alone is the gravy on the turkey of my heart.
The Detroit Lions aren’t much more fun to talk about, but they have plenty to be thankful for, primarily the incredibly low bar their fans have for them. I have a friend who is a Lions fan (bless his heart), and when asked to describe the 2019 Lions, he simply said: “Every single aspect of the team has *at best* underperformed except for Matthew Stafford who through 8 games was having a career year… then he broke his back. He tried carrying this team on his back but those sacks of shit were too heavy.”
Shout out to John, who also made music back in the early aughts under the pseudonym Major Applewhite which is probably the best solo act name I’ve ever heard.
As if losing Stafford with broken bones in his back wasn’t enough, apparently Jeff Driskel is also on this week’s injury report. The Lions tried to sign Josh Johnson since he played for them in the preseason (his 13th NFL team!), and were blocked by the XFL.
Once more for emphasis: VINCE MCMAHON IS SCREWING THE DETROIT LIONS. Bret Hart must work for them or something. That’s so fucking sad I’m just gonna stop talking about it.
As it goes, I’d like to compare the Lions to a side dish that you’ll be munching on while digesting terrible football on Thursday: Green Bean Casserole. I fuck with casserole, and I think GBC is a prime one. I’ve seen a lot of people on my social media feeds ripping on GBC, and I gotta say: fuck them.
Cream of mushroom soup- decent (the Lions run defense, in theory)
Green Beans- decent (Darius Slay)
French Fried Onions- dope (your Matthews Stafford)
The Green Bean Casserole is literally more than the sum of it’s parts, a hodgepodge of shit thrown together that tastes amazing.
Fun fact: Green Bean Casserole was invented by Campbell’s in 1955.
Additional fun fact: the last Lions NFL Championship was in 1957.
One of those things sucks, and the other doesn’t.
Wes: Tony, You’re the real King for coming up with and reminding me to do these tandem matchup posts all season. I’m thankful for our weekly banter in this lost shit storm of a Bears season.
The fans around Chicago aren’t thankful for much regarding their football team, but the Bears themselves are thankful for individual stand outs and a very convoluted and confusing path to the postseason, but still a path nonetheless. Take a trip with me on that path, will you?
Phew, that’s a lot. There’s actually a way the Bears could get in at 9-7, but there are so many more specific weekly win/lose arrangements in that scenario that you’re all going to be thankful for me NOT sharing it. Just know it’s all moot if the Bears can’t string together the wins on their own, and that starts with a big statement road win in Detroilet on American turkey booze day.
The Bears also need to be thankful for a handful of stand out performers on this underachieving nightmare squad. Allen Robinson is top five at the WR position but most casual fans would probably fight you on that because he’s stuck in a poorly run offense with a struggling young QB. I shudder to consider what this all might look like without ARob in 2019.  Khalil Mack may have been absent from the stat sheet coinciding with the losing streak, but without his first few games and performance against the Giants last week (all without his pal Akiem Hicks) we’re probably talking about silver linings instead of faint playoff hopes.
Role players like Nick Kwiatkoski, Cordarrelle Patterson and Tarik Cohen (who should probably be more than a “role player”…) have helped in a big way via Special Teams, plugged holes and played the next man up role perfectly to keep things from going horrible to catastrophic. So thanks to underappreciated few.
To me, the Bears individual standouts combined with the rest of team most closely resemble Thanksgiving Stuffing (or dressing if you wanna be a weirdo about it). Stuffing always, ALWAYS, has great components within. Bread? Sausage? Celery? Sage? That’ll do it. But no two Stuffing recipes are alike, and sometimes you get dried fruit in there. Or random vegetables. Or your aunt goes wild on the seasoning. Or your lazy ass uncle bought bags of croutons that are salty as hell. Some jerks even refuse to cook at least a portion INSIDE the bird. Idiots.
The 2019 Bears are Stuffing, because for every tantalizing ingredient like Arob and Mack, there’s too much salt or someone over thought it and added raisins and cranberries and three kinds of mushrooms without considering to just build a solid base first.
Here’s to hoping your Stuffing this year goes back to basics and just makes sure it’s a delicious, not looking to do more than it needs to. I can only assume Matt Nagy’s Stuffing takes 10 hours to prep and includes no less than 70 different ingredients.
Happy Thanksgiving, y’all!