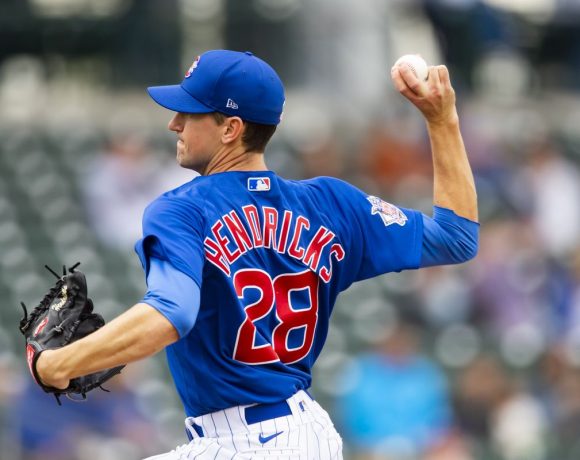 Ah yes, spring is in the air and the days are getting longer. That means baseball is just around the corner — tomorrow, in fact. The Cubs are opening their season against the Pittsburgh Pirates and the 162-game march to October commences.

Everyone knows the rule that you can’t put too much stock on how players are doing during spring training, but that’s exactly what we’re gonna do here. The Cubs have been busy playing a month’s worth of spring training games to prepare for this season. Some players have looked good, some have looked bad. Some have looked healthy, some have been injured. Let’s break down the starter’s roster so you know what’s going on when the Cubs take the field, assuming you’re watching.

Ready to watch fastballs that aren’t really fast at all this season? Of course you are, you’re a Cubs fan.

Old faithful Kyle Hendricks will get the Opening Day start now that Jon Lester has moved on. While Yu Darvish was getting all the glory last season, Hendricks was another pitcher that the Cubs could rely on. Last season he had a 2.88 ERA, a shutout, and allowed 26 runs, all of them earned. His spring training numbers are a bit uglier; he had a 6.39 ERA but had two wins. He will be our best starter this season.

Jake Arrieta hopes to rekindle what he once was in his glory years with the Cubs, and Ross seems to trust that he will be better this year. He had a pretty average spring training, with a 4.08 ERA over 5 starts, allowing 19 hits and 8 runs during that span. Baseball Reference projects him to have a 4.67 ERA this season; though not stellar, that would likely be an improvement on his 2020 season and look similarly to his 2019 season with the Phillies.

Adbert Alzolay has also been a part of Rossy’s fan club. He has the fastest fastball of anyone at this team, clocking in at an average of 95 mph, which he throws about half the time. He also enjoys his slider, which he throws 40% of the time. This is a big season for Alzolay, as he is going from 4 starts last year (and 2 the year before that) to being one of the more regular starters. Can he hold up having 10, 15, 20, maybe eventually 30 starts a year? We are all about to find out together.

We’ve got some injuries in this area, as Rowan Wick and Jonathan Holder will not be ready to start the season. Wick was one of the best relievers on the Cubs last season with a 3.12 ERA across 19 appearances, so hopefully he will feel better soon. He has been working out with the team and “slowly returning to baseball activities.” Holder took some time off for a chest issue during spring training but is also getting back to throwing. He will likely start on the 10-day injured list this season.

If you’ve been kept awake at night this offseason wondering whether or not Craig Kimbrel will be a good closer in 2021, I am truly not sure what to tell you. He was injured/awful for most of last season until he got hot for the last month of it all. Now he’s back to letting 40% of the batters he faces get on base. And he has a 12.15 ERA in 7 games this spring training. But remember, spring training tells you nothing. Let’s try not to put too much stock into it. …Right?

Rex Brothers, a non-roster invitee, has found the good side of Rossy, even with his 8.10 ERA over three games played last season. He has been good during spring training, however. He played in 9 different games and has a 0.00 ERA over spring training. Let’s be cautiously optimistic?

Dillon Maples kind of sucked during spring training, but what else is new? He pitched 10.1 innings and allowed 8 hits and 9 runs, 6 of them earned. He has issues with control and seems to easily go from an 0-2 count at bat to walking the batter thanks to a HBP. In two appearances last season he gave up 1 hit and 3 runs for an 18.00 ERA. Ross says he’s throwing more strikes and will continue to improve.

This team needs to be nails defensively thanks to this wacky bullpen we are throwing in front of them. Luckily, defense is what the Cubs do well, most of the time.

I’m honestly not hating this outfield lineup at all. So far, Joc Pederson has been ripping it up offensively in camp, leading the entire team in hits with 17 and home runs with 8. If he continues go off like this during the season, he will be a great Schwarber replacement. Ian Happ also had a nice spring training, with 44 at bats, 14 hits, 15 runs, 2 homers, and a 1.002 OPS. Jason Heyward, not the player of yore, had 10 hits, 8 runs, and a .729 OPS, but hey, maybe those numbers will improve during the season.

Thought you’d be seeing Nico Hoerner at 2nd this season? You are incorrect. IT IS DAVID BOTE’S TIME, so he will be starting the season with the club. Expect Hoerner to come back up from minors regularly if anyone gets injured or things go sideways. The good news is that Hoerner crushed it during spring training, and Bote wasn’t too shabby himself. Hoerner had 16 hits over spring training and 2 homers for a 1.055 OPS. Bote had 14 hits, 3 homers, 7 runs and a .990 OPS. Neither of these numbers are bad. I think we have two great second basemen this season.

For some reason, the Ricketts family is not negotiating with face of the entire damned team, Anthony Rizzo, for a contract extension. Because reasons. Because money. Because the literal billionaire Ricketts family does not have money to sign an extension. Remind me why I watch this team again?

We’re all breathing a sigh of relief that Willson Contreras is still on this team. He is a rare catcher who is productive on offense and defense. He was also one of the better players at the plate for the Cubs last season, leading the team in runs scored and second only to Happ in hits.

Javier Baez is supposed to improve on this season now that he has the all-important video review at his disposal, but so far his spring training results are a little…meh. He did hit 2 homers, but he only had 9 hits in 52 plate appearances, making for a .184 batting average. Hopefully he figures it out and fast, because it’s a contract year, my friend.

I’d talk to you about Kris Bryant but he’ll be dealt by the end of this season anyway.

With Victor Caratini going the way of the western wind with our beloved Yu Darvish, the backup catcher role became whoever’s for the taking. Austin Romine, the veteran catcher, is currently sidelined with a knee injury (a recurring knee injury, so buckle up, everyone). We all assumed it would be PJ Higgins as the backup catcher while we wait for Romine to get better, but then just hours ago the Cubs announced the signing of catcher Tony Wolters, recently of Rockies fame.

Wolters’ numbers from last season kind of suck, but it seems like most teams are throwing those stats away and chalking them up to a weird year. He only had 10 hits all year with the Rockies for a .230 batting average. However, the rumor is Wolters is pretty good defensively, which is probably why the Cubs snatched him up. We love defense here, don’tcha know. His caught stealing rate is 32.8% lifetime, which is above the 27% league average. We’ll see how he fares as our backup.

Additionally, Jake Marisnick is an outfielder who, though missed some of spring training with an injury, came back and hit four home runs in only eight Cactus League games. Eric Sogard is a utility player who had 12 hits during spring training, along with a homer, for a .375 batting average. Maybe he can continue his hitting so his batting average improves on his abysmal .209 number with the Brewers last season season. Finally, Matt Duffy is another utility player who didn’t even play in the 2020 season. In fact, the 2018 season was his last season with major playing time, where he had a .294 batting average. He also has a track record of reliable defensive prowess, so hopefully that continues with the Cubs.

The season starts tomorrow. Check back to this glorious website after every Cubs series to get my thoughts on what’s going on. And if the Cubs bore you and you want to enjoy some exciting baseball, you can always turn on the Padres and root for Yu Darvish. Go Cubs go!