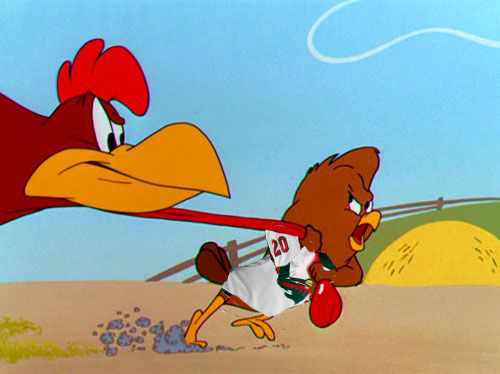 Game #21 – Wild vs. Hawks Douchebag Du Jour: If You Need To Tell Everyone, Then You Aren’t It

If you watch any number of Wild broadcasts, and you probably shouldn’t if you want to claim any use to society which we gave up on long ago, you’ll get the impression that the production wasn’t hugged enough as a child. Or maybe too much. We can’t tell.

The Wild, or maybe just their media coverage, has this great need to be identified as someone’s “great rival.” A few years ago, it was the Blackhawks that were labeled that. Every visit of the Hawks to The X was labeled as a visit from “the Wild’s great rival.” Except the Hawks only ever noticed the Wild as a rest stop on their way to the next round of the playoffs. Games between the two meant so much to those in St. Paul. The Hawks treated them as, “Who are you again?”

These days, it’s the Winnipeg Jets that the Wild are claiming is their blood feud. We guess by physical proximity it could work. Except the Jets don’t care, because the Jets now see the Wild as nothing more than a rest stop on their way to the next round of the playoffs. And if the Jets have a rival, it’s probably another Canadian team because that’s just how things work up there.

If you have a rival, it means you matter to someone. And that’s been the Wild’s problem. They haven’t really mattered to anyone. You never think about them, and when they pop up on the schedule your biggest reaction is, “Oh right, them.” No one ever circles dates against the Wild on the schedule. Hell, people in Minnesota basically treat them as a pre-show to the Gophers. So perhaps their aching need to bother someone is just a cry for attention. It has to be.

But they’re still not there. Jets fans don’t care about the Wild, especially given the way the Winnipeg turned the Wild into an aioli in last year’s playoffs. And they’re likely to do so again, if the Wild aren’t served up to the Predators instead.

The Wild aren’t even a little brother. They don’t have that kind of connection. They’re the kid down the street who keeps offering to fight you for money while you’re just trying to get to the store. They’re no one’s rival, except for maybe themselves.

Keep stamping your feet, Minnehaha. Maybe you should get a horn like the Vikings. At least then you’d be annoying, which would move the needle in any way. Which the Wild haven’t done ever.