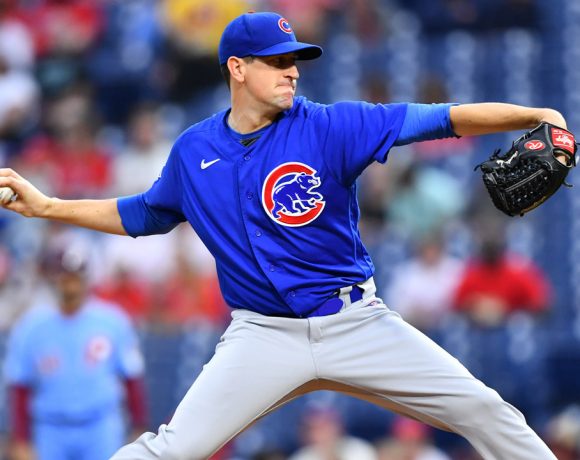 This series started on a surprisingly positive note and then ended with a disgraceful excuse of a baseball game for the Cubs. The Phillies continue grasping blindly at a final wild card spot despite being 2.5 games back thanks to the shellacking they brought upon us, whereas Cubs fans are now wondering if Kyle Hendricks being the #1 starter next year will even be enough to propel them to the playoffs since this is Totally Not a Rebuild. I love Hendricks, but I’m not sure if he’s the answer.

There’s a lot of crap to muddle through here, so let’s get on with it.

The Phillies needed this win much more than we did as they continue to attempt (in vain) to catch any of the four teams ahead of them for a wild card spot. And yet, they were still able to lose this one against this meaningless Cubs team, despite going up early on a solo homer against Adrian Sampson in his third start of the year and Kyle Gibson, the Phillies’ starter, at one point striking out five batters in a row.

Gibson dominated against the Cubs for four straight innings, allowing no hits until the 5th when the game was cracked wide open for the Cubs. A hit by Willson Contreras and Patrick Wisdom’s Kris-Bryant-rookie-record-tying home run gave the Cubs a lead they wouldn’t surrender. Immediately after, Alfonso Rivas hit his first major league dinger, which excited the entire bench. Ortega was able to hit a barely-fair ball to left field to score Sergio Alcantara in that inning, making it four runs in the 5th for the Cubs and ending Gibson’s day.

The Phillies didn’t give up, and in the 6th inning ended up scoring two runs thanks to a Bryce Harper hit that was difficult to field and some aggressive yet successful baserunning on their part. Another hit that poked its way through both Cubs outfielders and an unsuccessful play at the plate put the Phillies at only a one-run deficit. The Cubs answered back immediately with pretty sweet outfield hits by Frank Schwindel and Ian Happ to score two runners and wrap up this ballgame.

Sampson pitched pretty well all things considered, going five innings and only allowing two runs. (The bar is low in this neighborhood.) Manuel Rodriguez allowed the third Phillies run, walked a batter, and allowed two hits in his one inning, which isn’t good. After him, however, the Cubs bullpen allowed no Phillies hits, with Tommy Nance and Scott F-Ross pitching an inning each and F-Ross getting two strikeouts. Rowan Wick even struck out three batters in an impeccable save appearance.

I guess the Cubs should get credit for not giving up on this one, as they came from behind to tie the game multiple times. However, it never ended up being enough, as the Phillies were able to walk it off with a run scored in the bottom of the 9th.

Alec Mills pitched three scoreless innings before things started unraveling in the 4th. The teams traded bases-loaded, no runs scored situations in the 3rd inning. By the 4th, a few well-hit balls to the outfield that were hard to field gave the Phillies a one-run lead, but a double play fielded by the Cubs later on in the inning meant that the incoming two-run homer made the game 3-0 instead of 5-0. Good job, everyone.

The most amusing part of the game was when Frank Schwindel hit a two-run homer in the next inning and Schwindel’s extended family of like fifty people went nuts in the stands. At least someone’s happy about this current Cubs team, am I right?

The 5th inning was not good, with a hit and an intentional walk for Mills before getting pulled for F-Ross. Then F-Ross allowed a single to score a runner that made it 4-2. It wasn’t until the 8th inning when the Cubs were able to tie it with another two-run dinger, this time by Robinson Chirinos.

The next three half-innings had the Cubs and Phillies each trading runs with each other. JT Realmuto hit a solo dinger in the 8th, and then Matt Duffy hit a homer in the 9th, but the Phillies walked it off again after Trevor Megill gave up a hit, a sac bunt, a sac groundout, and a passed ball by Chirinos that ended up scoring the winning run.

Usually when you go up 7 runs on a team in a game it’s enough to net you a win. Not for this garbage-pile Cubs team, however, who almost instantly gave up 7 runs of their own to tie the game and then gave up 10 more runs to lose in the most embarrassing possible way there is to lose a baseball game.

It was the bottom of the 4th inning when Hendricks collapsed and gave up four hits, four walks and five runs before he got yanked for Michael Rucker, who on his third pitch of the game gave up the extra two runs to tie it on a line drive single to center field. Rodriguez proceeded to give up three more runs in the 6th inning and another two runs in the 7th inning to become the losing pitcher. Rex Brothers, Rodriguez’s mid-inning replacement with no outs, immediately gave up a three-run homer on his first pitch to make the game 15-8 Phillies for good measure. Dillon Maples gave up a few more runs in the 8th, too, just because everyone else was doing it.

Despite a deluge of Cubs offense in the 3rd inning that gave them a 7-0 lead on three hits, a home run, and four walks, the Cubs then went completely flat with only four hits in the rest of the game, because of course they did. The Phillies wanted and needed this game more to stay in the fateful playoff race, and they went out and trounced us here. It was awful baseball.

Speaking of awful baseball, it will likely continue this weekend when the Cubs get inevitably pummeled by the first-place Milwaukee Brewers this weekend in what will surely be an embarrassment of a series. I’d turn on the football if I were you. Go Cubs go?