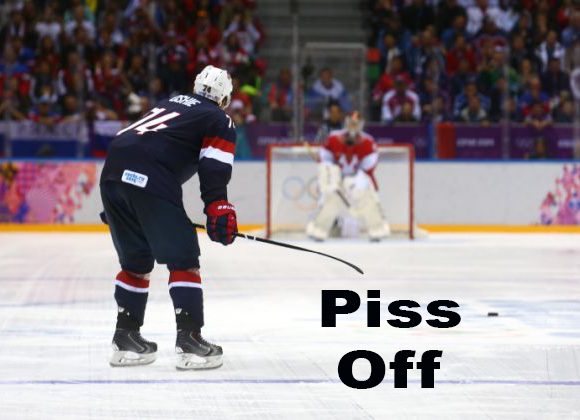 We can only hope.

It was five years ago, so you would think the memory should be pretty yellowed by now. Yes, we’re biased when it comes to T.J. Oshie. He was the dude in St. Louis who made engine noises when he was on the ice. He was the asshole who Blues fans couldn’t wait to point out had scored more at North Dakota than Jonathan Toews, for reasons we can’t understand. Maybe it made St. Louis residents feel good in a way that only booing Cardinals who happen to be black does. Oshie also has that big dumb face.

But by far what came to annoy us most about Oshie was the glow and esteem he got out of a shootout performance in the Olympics in 2014. While the actual performance may have been fun at the time, let’s review: It didn’t come in a game, but a gimmick. Second, it came in a gimmick after a game that didn’t matter. It was the preliminary round. It basically got the US nowhere. Third, it was a shootout win over a Russian team that flat out sucked. The US should have ripped that team apart.

Really, check out this defense: Nikita Nikitin, Slava Voynov, Fedor Tyutin, Alex Emelin, Andrei Markov, and a couple of KHL wanderers. That’s a defense that’s asking for its doors to be blown off. The US could only manage a couple of power play goals. We should have known it was going to be a balls-up then.

And it didn’t help the US win a medal. They were utterly smothered by Canada in the semis, perhaps the biggest gap between teams in a game that ended up 1-0 in history. It could have been 120 minutes long, and the dunderheaded roster USA Hockey put together led by the simply bewildered Dan Bylsma–who attempted to play a dump and chase game against one of the best defenses ever assembled–would have never scored. The US didn’t bother to care in the Bronze Medal game.

And Oshie has been coasting off that ever since. It seems to always come up, and don’t be shocked if it gets mentioned on NBC again today whenever he is on screen. It was a quirk. An anomaly. A fissure in time. Nothing more. So leave us alone.