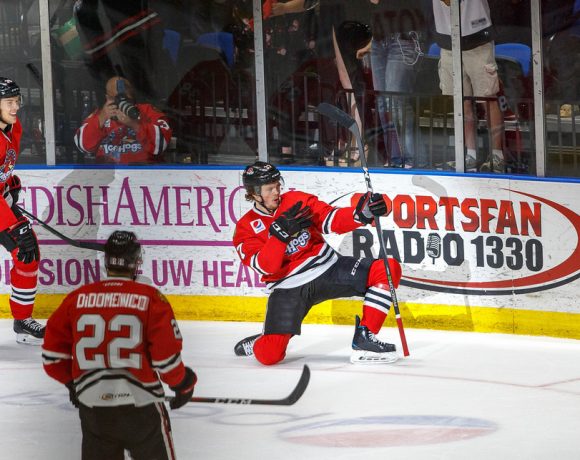 The Rockford IceHogs take to the ice at the HEB Center against the Texas Stars Monday night in Game 6 of the AHL’s Western Conference Final. The piglets stayed alive Friday with a 3-1 victory over Texas in Rockford to necessitate a trip back to the Lone Star State.

To advance to the Calder Cup Final against the waiting Toronto Marlies, the IceHogs require a road sweep of the final two games with the Stars. Game 7, if needed, will take place Tuesday night.

Rockford turned in a gritty effort to extend the series in Game 5. It was the first game that neither club’s power play was able to score. The Hogs had to get it done at even strength, which they did after a marvelous opening period.

As they had in Game 4, the Hogs came out of the gate in attack mode. Friday night, it resulted in two goals in the first 8:15 of action. The first came on a clap shot by Cody Franson from the left point 3:01 into the game. Five minutes later, Rockford was able to double its advantage.

The scoring play took shape quickly, with Victor Ejdsell finding Luke Johnson unchecked just outside the Stars zone. Johnson bore in on Texas goalie Mike McKenna and united rubber and twine in matrimony at the 8:15 mark.

David Kampf got off a nice shot from the left dot that rang off the far post but stayed out of the net a few minutes later. Even so, it was a dominant first-period for the IceHogs.

Texas didn’t get this far in the tournament by laying down their sticks when behind. The push back came in the second period, where they began winning races to the puck. Midway through the period, Roope Hintz gathered in a rebound in front of Jeff Glass’s net and deposited it to cut the Hogs lead to 2-1.

The IceHogs were getting time in the Texas zone in the third period, but weren’t getting the type of looks that could result in the insurance goal they sorely needed. McKenna, who has been outstanding in the Stars playoff run, coughed up a softie at a most opportune time for Rockford.

Kampf crossed the blueline and tossed a shot on the Stars net. It was not much more than a dump-in, really. McKenna swatted it away with his blocker. However, the puck tumbled high over the head of McKenna and landed in the crease behind him, toddling across the goal line to put the Hogs up 3-1 at the 11:13 mark.

Glass and the IceHogs, buoyed by McKenna’s gift, kept Texas at bay for the rest of the contest. In his second-straight start, the veteran made 40 saves on 41 shots. Rockford was out shot 26-8 in the final 40 minutes but triumphed nonetheless.

Despite the Stars nearly doubling Rockford up on shots (41-21), the Hogs closed the Texas series lead to three games to two in a very heartening way. Here’s why:

Collin Delia earned his spot as the postseason goalie with some great play in the first two rounds. In turn, Glass has earned the right to man the pipes for the remainder of this series, in my opinion.

Could Texas be feeling a bit tight around the collar after the Hogs kicked out of two elimination games? Possibly, though they still need just one win in their barn and will get two shots to do that. McKenna is still going to be a tough man to score on.

Curtis McKenzie squared off with Franson late in the first period Friday in an attempt to fire up his club. The Stars looked a bit frustrated at the physical nature of the Hogs effort, but Texas is more than able to give as well as they get in that department.

Three of the games in this series have been decided by overtime. It won’t come as a surprise if Game 6 is a hard-fought affair that may require some extra effort. Can the IceHogs force a seventh game in Texas? We’ll find out soon enough.