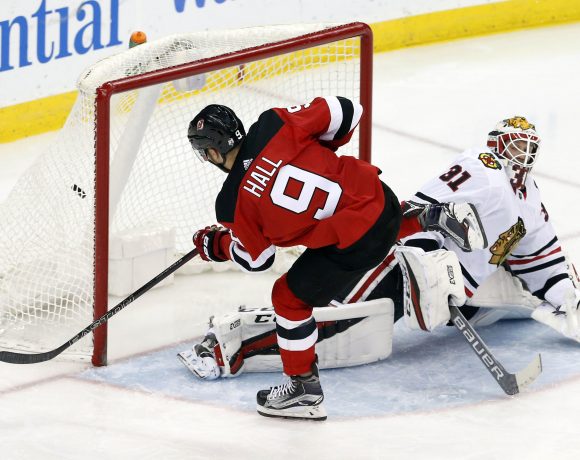 Not exactly how you begin a road trip. While I didn’t think the Hawks were particularly bad on Thursday, certainly not to the point with which they were unlucky, they needed a response tonight before a break and the rest of this trip. And they got one… it just came 20 minutes too late. And when you cough up a division game before this, you kind of lose your right to mail in one right before the Christmas break. The Hawks seemed to realize that in the 2nd, but that’s not good enough. You’re not going to claw three back against Cory Schneider the way he’s playing. And you’re especially not going to do it when Sharp and Sbarro can combine to do perhaps the worst Stadler And Waldorf On Ice in the history of time (a competition I would like to judge one day).

Let’s run through it:

-Especially in a sport as closed off as hockey, it’s probably impossible to get to the middle of how a team that kind of needed this one tonight can come out so rotten as the Hawks did in the first. There must’ve been eight to ten turnovers in the first five minutes in their own zone. “highlighted” by Gustav Forsling with a beautiful centering pass to his own crease and then Panik with a layoff to Brian Boyle.

The easy way to go here is to lay it at the feet of Joel Quenneville, because obviously it’s the coaches job to get a team ready to play. If it is with him, it certainly not all with him. It’s a whole leadership thing. And this is where you’re free to wonder with the three lettered players–Toews, Keith, Seabrook–basically producing dick (except for Keith, really)–how much influence they might have right now. They have veteran cache, sure. But someone’s gotta take the blame for how often, on the road usually, this team just isn’t at the races. But we’ll circle back to this in a moment.

-What I can hang Q out to dry for, and frequently have and will continue to do so, is these bewildering lineup and deployment choices. How does Patrick Sharp go from a deserved healthy scratch to the second line with Toews with no in-between? Players notice that, and I’m sure a couple are wondering what they have to do to get such treatment.

Let’s go to the Devils 4th goal, and what was a back-breaker. The Hawks have some juice from the second, a two-goal deficit is at least doable, and then you get this from Sharp and Seabrook. While watching this, make note of where Murphy is and where Seabrook ends up:

Murphy is up on the play, as he should be as the Hawks push for another goal. And you want your defense to be active, but you don’t want them to be aggressively stupid, or suicidal. Seabrook is all the way up with two Devils behind him. Murphy is the one who’s pushing here and Seabrook has to play the free safety.

Of course, maybe this doesn’t matter if Patrick Sharp doesn’t execute the Ozzy Osbourne “Drop Pass To Nowhere” (leads to me). Good thing he was on the second line tonight.

-How does Jordan Oesterle go from four games in two months to the power play? Given what led to the penalty shot, this seems an even more valid question.

-Let’s keep going. Gustav Forsling sucks in his own end. I can’t put it lightly anymore. I’m not sure Jan Rutta is any better. So why are they starting a penalty kill you kind of have to have when you’re already down one? The one thing a kill can’t have is passes that go through the box. So of course it took Forsling all of six seconds to completely lose Palmieri behind him, and then be completely pointed the wrong way to turn into a goal-scoring bumper for the Devils.

-Right, so let’s circle back to the leadership thing again. Obviously, this blog and this writer has a complicated relationship with Patrick Kane. So the following is strictly on-ice. But if you had told me say even three years ago that when the Hawks are struggling and need a boost, it would be Kane who consistently provides it and Toews would just sort of have a vacant look on his face most of the night, I would have called you a filthy liar and then asked the bartend to cut you off if not outright remove you from the premises.

But that’s been the story. On a night where he could have easily chucked it, Kane spent the second period trying drag his team back into it. And this is hardly the first game, either this year, or last year, or the one before that, where he’s done it. Sure, there’s the whole difference of center-vs-wing, and the competition each play, and where they start. But this team needed a jolt and for someone to say “fuck this” and to try and come up with inspiration. Only one half of Daydream Nation did it.

-Remember when Brandon Saad was noticeable? Good times, those. Many laughs were had. A libation shared. I’m sad these are things we just reminisce about right now.

-Ok, that’s enough heading into the holiday. From all of us here, have a wonderful Christmas. And we’ll pick it back up when the Hawks land on the West Coast.