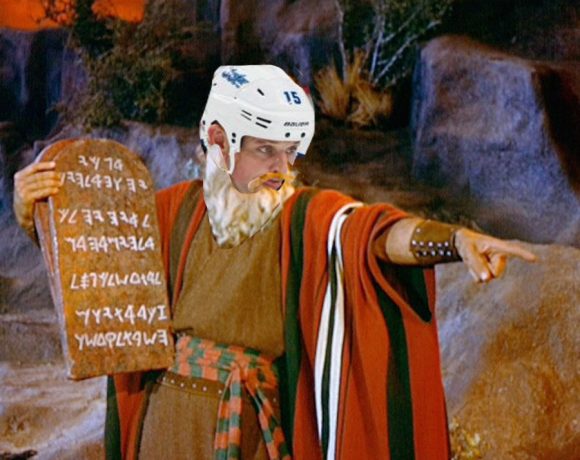 There really is no better theater than when a Canadian team is bad. And it’s exponentially better when that team was expected to be good. So here’s the latest lunacy going on in Edmonton.

This is hardly the first time we’ve seen that a goon’s absence is the main fulcrum for a team’s collapse. It usually comes out of Boston, and word is their construction of a Shawn Thornton statue to place in the middle of the dressing room is almost complete. And no, you won’t be allowed to step on it, though that won’t stop Pierre McGuire from making love to it upon his every visit to TD Garden, along with some possible pitstops as he’s covering games anywhere in the Northeast. And there’s an image to get you through the rest of the day.

Hockey is the leader in attaching “value” to players who have none and calling it leadership. It kind of works because I’m sure players actually buy into this shit. If they were to look at it logically, you’d probably get Leon Draisaitl thinking, “Why the fuck am I going to listen to a guy whose inability to skate four minute competently causes me to have to skate 22 a night and then kill his penalties?” Yeah, that would be a fair question.

It’s not germane to hockey, of course. Remember when the Cubs’ early season struggles were blamed on the absence of David Ross and the pool noodle he brought to the plate? But hey, Ross at least was still a very good defensive catcher who could throw guys out. He had value somewhere.

None of this is helped by the fact that the team Matt Hendricks defected to, the Winnipeg Jets, are having a surprise start to the season. But to the hockey media, especially north of the 49th. there has to be a mythic quality to everything. This stems from the bullshit narrative that hockey players are somehow “special” instead of the same genetic freaks that every other professional athlete is. So the Jets success isn’t really just based on Connor Hellebuyck finally fulfilling the promise he showed in lower leagues and ages and the Jets shooting the lights out. No, there’s an element of magic to it, magic that only “glue” guys like Hendricks contain and have spread out of his pores and infect everyone else in the dressing room. Because Blake Wheeler hasn’t been perhaps the league’s premier power forward before Hendricks showed up.

As for Edmonton, the problems are so obvious that I suppose everyone there is just fatigued of talking about them. Their blue line sucks. It’s sucked for years. They have no bottom six or really any wingers of note when Draisaitl is in the middle. And Cam Talbot just hasn’t been quite as good as he was to bail them all out. And they have no backup again, so he’s playing all the games and his muscles and tendons are going to be paste at any moment now.

But clearly, no team can just lose. They must be missing something, like a dunderhead who can’t play barking at them from the bench on how many minutes per goal they can take to overhaul a two-goal deficit or talk shit from the bench. That’s my favorite part, how these are called leaders because they talk while not playing. Yeah you know what happens when you talk shit to LeBron from the bench? He drops 40 on you and then goes and sits on the bench himself because his team is up 25. I live for the day that like, Tarasenko scores a goal and then takes the puck and flips it to Hendricks as he skates by because he wouldn’t shut up from the bench. Hockey would lose its fucking mind and it would be hilarious.

If Connor McDavid can’t be a captain because Hendricks isn’t around, then maybe they shouldn’t have put the “C” on him in the first place. If he doesn’t think his skills and importance don’t give him every right to jack up Milan Lucic and get him to actually do things that help the team, what’s the point?

But no, it’s never that simple, is it?