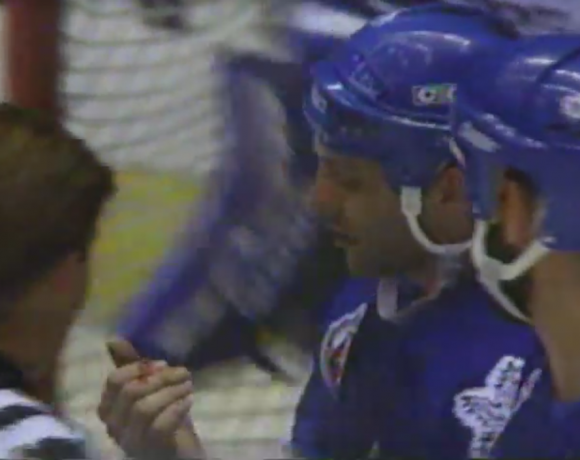 We can’t give you his name, as he’s shrouded in secrecy. He used to run PensionPlanPuppets, but now he just sits in a dark room plotting his revenge. You can follow him @MLSE, if you dare.

We’ll start with simple stuff: Just what the hell is going on with this team?
They’re doing better than last year somehow (better goal differential and more points through the same number of points) but most fans aren’t happy with how they’ve done it. Last year’s team was a swashbuckling team of kids that played with no fear. This year’s team is now a chip and chase team that is more focused on stopping the other team than in trying to force the game on their terms.
Is Mike Babcock, in fact, not a genius?
Babcock is an incredible coach. He does, however, have a few blind spots that we knew from his time in Detroit. Mainly, it’s that he favours (don’t you dare “fix” my Canadian spelling) veterans over youth and he has a clear idea of how he wants different aspect of his team to be built (muckers on the fourth line, defencemen with cement-filled skates that can absorb shots on the PK). Randy Carlyle was a little similar in that regard but obviously with a lot less ability (his own and the team’s). It does look like Babcock is starting to come around. Travis Dermott finally got a shot, Matt Martin may finally be a scratch, and Leo Komarov will be on the fourth line instead of dragging down Marleau and Kadri. Of course, that’s just for road games because Babcock doesn’t have last change. And it’s that need to control every aspect of the game that I think is his biggest issue.
What are the Leafs going to do at the deadline? We have to believe a d-man is on the list, no?
It’s been on the list for the last 12 years! If they could add a top pairing defenceman that pushes everyone down one spot on the depth chart (and gets Polak in the press box for good) then the defence suddenly becomes a pretty good group. If you can give Rielly better support and then have Gardiner/Zaitsev/Hainsey facing second tier competition and Carrick/Dermott eating up the rest then you have good skaters and puck movers on every line which is what this team needs to get back to being a fast, skilled team.
Name Kadri was a 30-goal scorer with 61 points and impressive metrics last year. All have dropped. What’s going on here?
Same thing that sewered the year before last: luck. You can split his season in two and you’ll see that the second half has seen him produce more shots but his shooting percentage plummet. His line has been struggling in terms of carrying the play compared to his career. Part of that is that I don’t think Komarov can face the toughs anymore and I’m not sold on Marleau being able to either (despite being a good addition). If Babcock trusted the Matthews line more at home then I think you’d see Kadri’s struggles turn around really quickly. Plus, in the last two games he’s made amazing passes to Marleau for goals that have been miraculously saved. It’s been that kind of stretch for him.
Is it time for Leafs fans to crack each other’s skull open and feast on the goo inside? Or is this kind of just a midseason lull and they’ll give Tampa everything they can handle in the playoffs?
It will always be skull cracking time with Leafs fans but that has nothing to do with how the team is doing so much as the feeling you get from talking to them. I think that the Leafs could possibly be having some come to Jesus moments that will bear fruit in the long term and they’re lucky enough to be in a division that is a total mess so there’s no pressure other than knowing they’ll face one of the two top teams in the NHL in the first round. I think that best case scenario, barring any big trades, is like last year: a gallant effort, some excitement, and a 5/6 game series loss to Tampa or Boston. After last year we’d all hoped for more but I don’t see much that gives me hope for more unless Babcock really starts changing how he dresses the team and Lou and Co. can get them a bit more help. But no big deal, these teams of young (looks at LA) studs (looks at Pittsburgh) always (looks at Chicago) eventually come good, right? (Looks at Edmonton, barfs)