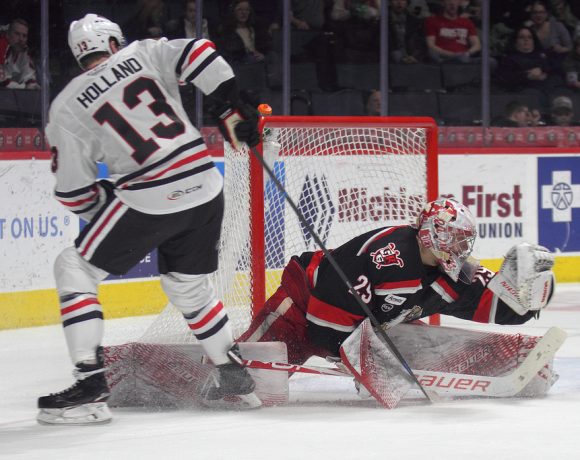 High On The Hog: Packing The Bags

The Rockford IceHogs have a couple of new faces in the fold. With the NHL trade deadline fast approaching, there could be a couple more before the day is out.

The Blackhawks made two trades this past week. They aren’t likely to have a big impact in Chicago, but they could boost the playoff chances of the Hogs, who beat Grand Rapids in overtime Wednesday before dropping games in Hershey and Wilkes-Barre/Scranton over the weekend.

Rockford (26-22-3-6) are currently fourth in the Central Division with a .537 points percentage. With Chicago, Grand Rapids and Iowa a bit above the rest of the division, the last postseason spot could turn into a dogfight between the IceHogs, Texas and Milwaukee.

On Monday night, the Hawks made a move to bolster the offense, which is still last in the AHL as the month of February nears an end. Chicago sent defenseman Darren Raddysh to the Rangers in exchange for center Peter Holland.

The 28-year-old Holland is a veteran of 266 NHL games with ANaheim, Toronto, Arizona and the Rangers. He is nearly a point-a-game player in his stints in the AHL. In 52 games this season with the Hartford Wolf Pack, Holland had 20 goals and 29 assists.

Obtaining one of the AHL’s top scorers was worth the price of losing Raddysh, who has shown steady improvement in two seasons in Rockford. With a young defenseman like Lucas Carlsson showing he can bring a similar game and a number of young defensemen poised to join the club next year, Raddysh was expendable.

Holland made an impact upon joining the Hogs; he had two assists in a 3-2 win over the Griffins Wednesday, then potted his first goal in a Rockford sweater Saturday in Hershey. I’ve frequently said this season that the IceHogs needed some top-end veteran scoring. Stick tap to Hawks GM Stan Bowman for going out and adding a piece for Rockford.

On Sunday, it was announced that a deal had been struck with the Kings to send Matheson Iacopelli to Los Angeles in exchange for forward Spencer Watson. This is not a move that figures heavily in the plans of the Blackhawks…or the IceHogs, for that matter.

Watson turned pro last season and played 11 games for the Kings AHL affiliate in Ontario. He’s amassed great point totals in the ECHL, including 47 points in 47 games with Manchester. So far this season, though, he hasn’t been able to break into an Ontario lineup that is last in the league. Watson has been up for two games with the Reign this season.

Iacopelli, despite possessing a beauty of a shot, couldn’t find steady work with the IceHogs. He has 27 games in Rockford and has been in Indy for most of the last two months. Watson, who was added to the Hogs roster Sunday, could see some action in lieu of AHL forwards Terry Broadhurst and William Pelletier being banged up.

For the time being, Watson gets a chance to win a regular spot and help keep Rockford afloat at forward. Worst case, he moves down to Indy and helps the Fuel in their hunt for the playoffs.

Could any of the current IceHogs be moved today before the deadline? Very possible. Aside from goalie Kevin Lankinen, not much would surprise me over the next few hours.

Henri Jokiharju and Josh McArdle were men on the move this week. Both left and returned to the Hogs in the matter of a couple of days.

Jokiharju was an emergency call-up by the Blackhawks Friday. He was re-assigned to Rockford the next day and arrived in Hershey in time to dress for Saturday’s game. McArdle was sent to the Fuel last Sunday, then was recalled by the Hogs Saturday.

Rockford stayed the course after a rough opening period to outlast the Central Divisions top team. They beat the Griffins in Gus Macker Time and at Van Andel Arena to boot.

Grand Rapids got goals from Wade Megan and Matt Peumpel in the first period. That 2-0 lead held until the fourteenth minute of the middle frame. Joni Tuulola sent a Peter Holland pass by Griffins goalie Harri Sateri to foil the shutout bid.

Jordan Schroeder knotted the game on the power play, aided by Holland’s second apple of the evening. The game remained a 2-2 affair through the remainder of regulation.

Both teams had chances in overtime. For most of the extra five minutes, Sateri and Hogs goalie Anton Forsberg made the required stops. In the closing seconds, Rockford was able to get into the Griffins zone.

Graham Knott sent a shot from the right circle that came off of Sateri’s pads and right onto the stick of Luke Johnson. Johnson sent the rebound into the open Grand Rapids net with less than a second remaining in the overtime period.

Forsberg sent away 37 shots on the evening to pick up the win, Rockford’s third in a row.

The Bears kept their recent win streak going, winning their eleventh straight. Rockford picked up a point to keep their point streak alive at four games.

Newcomer Peter Holland got the Hogs on the board first, via the power play. Holland one-timed a Henri Jokiharju pass into the Hershey net just 1:21 into the contest. The Bears tied the score at the 14:54 mark when Ryan Sproul’s shot from the goal line caught the blocker of Hogs goalie Anton Forsberg and tumbled into the cage.

Rockford regained the upper hand a few minutes later after Viktor Ejdsell sent a clearing attempt ringing around the boards and out of the defensive zone. Anthony Louis eventually caught up with the puck coming into Bears territory, skated to the goal line, and dropped a pass to a waiting Jacob Nilsson. The shot beat Hershey goalie Ilya Samsonov to the upper right corner of the net for a 2-1 IceHogs advantage.

After a scoreless middle frame, Hershey tied the game after an early Rockford turnover in the final period. Henri Jokiharju sent a pass that Joni Tuulola couldn’t get under control. The Bears Beck Malenstyn scooped up the puck and dealt it to Garrett Pilon, who beat Forsberg to the cord at 1:28 of the third.

The remainder of regulation and overtime passed with nary a puck in a net. The shootout would decide this contest. With the tally 1-1 going into the third round, Hershey’s Nathan Walker beat Forsberg. Anthony Louis lost control of the puck on his third-round attempt. The biscuit rolled into the net under Samsonov but was ruled a no-goal by the officials, ending the game.

The Penguins scored first, getting a Ryan Scarfo goal at the 6:48 mark. Rockford evened things up late in the period. The Hogs were established in the offensive zone and benefited from some slick passing from defensemen Dennis Gilbert and Lucas Carlsson.

Gilbert sent the puck out to Luke Johnson at the point, who slid a pass to Carlsson along the blue line before skating to the high slot. Carlsson found Johnson on the return feed; Johnson’s shot beat the glove of Penguins goalie Tristan Jarry. The light came on at 18:07 of the first and the teams went into the intermission on equal ground.

Former Rockford skater Jimmy Hayes provide the offense in the second stanza, scoring twice to give Wilkes-Barre/Scranton a 3-1 advantage. Hayes banked a centering pass off of Carlsson 5:45 into the second, then beat Lankinen with a one-timer from the right circle at the 11: 21 mark.

The IceHogs pushed to get back in the game to no avail. Rockford put 12 shots on Jarry (the Hogs out shot the Penguins 34-27 on the afternoon) but couldn’t chip into the deficit. Adam Johnson added and empty-net goal for Wilkes-Barre/Scranton with 3:18 remaining.

Rockford continues its road trip Tuesday in Rosemont and an Illinois Lottery Cup tilt with the first-place Wolves. The Hogs are at the BMO Harris Bank Center on Friday night to host Grand Rapids. 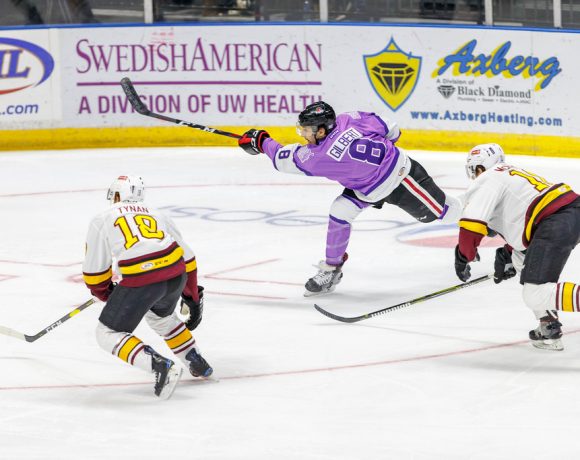 High On The Hog: Vacation For Gilbert

Rockford IceHogs defenseman Dennis Gilbert has adding a physical element to a team that is more focused on skating than brawling. The former Notre Damer paid a price for that style of play last weekend.

The AHL suspended Gilbert for three games after taking a hard look at a hit he delivered in Sunday’s 3-2 win over San Antonio. Early in that game, Gilbert put a shoulder into the chest of Rampage forward Mackenzie MacEachern. The hit separated MacEachern from the puck as well as his senses.

Before MacEachern could be helped from the ice, Klim Kostin went over and quickly dropped the gloves with Gilbert. Kostin earned an instigator penalty and a ten-minute misconduct in addition to the five-minute fighting major. At the time, all Gilbert was penalized was the five-minutes for fighting. On Tuesday, the league opted for supplemental discipline.

Upon taking a long, slow look at the play, it becomes apparent that Gilbert was just a few inches high on the hit. Contact was made with MacEachern’s head, unintentional as it may have been.

This isn’t the first time that a call that was deemed legal in the course of a game drew the ire of the AHL. The on-ice officials made what they felt was the right call from the perspective of a live-action hit. A few inches lower and Gilbert delivers a legal hit.

Gilbert remained in the contest and assisted on Graham Knott’s game-tying goal in the third period. It was Gilbert’s first point since an assist in his season debut October 13. He’s been paired quite a bit with veteran Andrew Campbell recently. Of Rockford’s seven fighting majors this season, Gilbert has three of them.

Hogs coach Derek King seemed to disagree with the ruling in his weekly media availability, though he stopped short of criticizing the suspension. King said that he had advised Gilbert to continue playing in a physical manner.

In his first weeks as Rockford’s head coach, King has pushed the physical narrative decidedly harder than Jeremy Colliton. The IceHogs are far from being a punishing team in this regard, but it’s interesting to see how this plays out as the season progresses.

Gilbert’s absence prompted the Hogs to recall D Josh McArdle from the Indy Fuel Tuesday. The Rockton, Illinois native was in the lineup at the BMO November 7 against Iowa, thought that was Rockford’s morning school-day game. He should get a big reception from the home fans if he gets into a game this weekend.

The next day, goalie Kevin Lankinen was assigned to the Fuel, signaling that Collin Delia was ready to return to action after missing the last three games. Lankinen played well in this most recent stint with Rockford, picking up his first win of the season Sunday afternoon.

Rockford is attempting to win consecutive games for the first time since November 9 and 10. To do so, they will have to shut down a streaking opponent.

Grand Rapids, the hottest team in the Western Conference, comes to Rockford Friday night. The Griffins have won seven of their last eight, with the lone loss coming in a shootout against Milwaukee back on November 23.

Veteran Chris Terry leads the Grand Rapids offense with 15 goals and nine helpers in 23 games. Matt Puempel has chipped in with ten goals.  Veteran centers Turner Elson (8 G, 13 A) and Carter Camper (5 G, 15 A) have also been steady contributors.

Saturday night is another Illinois Lottery Cup tilt with the Chicago Wolves. Chicago has struggled of late, but rallied from a three-goal deficit to beat Iowa in overtime on Wednesday night.

Former IceHogs forward Brandon Pirri has picked up his scoring pace, with six goals and eight assists in his last ten games. He currently leads the AHL in scoring with 30 points (10 G, 20 A).