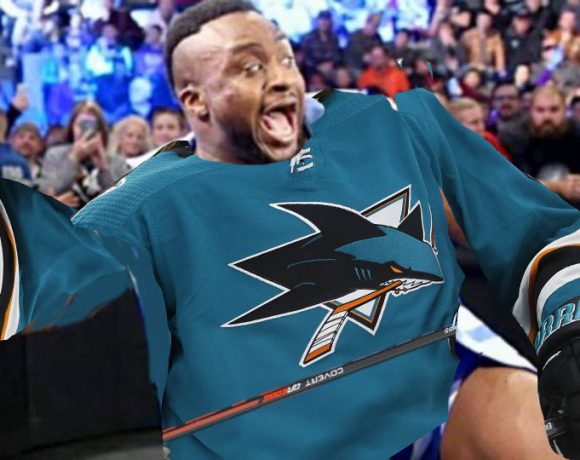 There are very few players whose switching of conferences can change the entire outlook of one. So when one of those actually does switch conferences, and he doesn’t light up the world and then tear a hole in it that he fills with peanut butter cups, most are inclined to tell you he’s a disappointment. Erik Karlsson is one of those players of the three or four there are. And most think he’s having a down season. In some ways, he’s actually having his best.

Yes, there are only two goals. Yes, none of them are at even-strength. His points-per-game are his lowest in about seven years. We get all that. And yet on the most talented team he’s ever played on (it’s not even close), Karlsson has the best relative stats of his career.

Karlsson’ +7.07% Corsi-relative is the second highest mark of his career, only bested by his ’15-’16 when he should have been racking up a third Norris instead of having Kings fans wet their bed so much they nearly solved the California drought problem to get Drew Doughty his. His relative-xGF% of +8.91 blows anything else he’s done in his career out of the water. When Karlsson is on the ice, the Sharks are getting far more good scoring chances than the other team, they just haven’t buried as many of them.

There are caveats. Because the Sharks, unlike the Senators at any time, have other good d-men (including a Team Canada worthy ones in Marc-Edouard Vlasic and Brent Burns), Karlsson doesn’t have to do everything for them. So he’s starting nearly 60% of his shifts in the offensive zone, also a career-high. And his quality of competition has dipped a little, as the really hard stuff is left for Vlasic and Justin Braun. They always did the mine-sweeping for Burns, and now they’re doing it for Karlsson as well. That said, you can’t ask more of Karlsson than to simply turn the opponent into a pot pie with that, and Karlsson is doing so.

Karlsson’s lack of goals is curious, as this is the second straight season his shooting-percentage has dipped. He shot 4.6% last year and this year it’s 1.9%. That seems ridiculously low. Even stranger is that Karlsson is getting more shots than he has in four seasons, over three per game. You can expect a binge somewhere around here that will make his points-total look a little more like we’re accustomed to seeing.

Which leads directly to questions about Karlsson’s future. It could already be sorted, of course, as the Sharks aren’t allowed to sign Karlsson to an extension until the new year. Perhaps they have a handshake agreement already. If they don’t, it gets a little tricky. The Sharks have something around $28M in space for next year, which seems enough. But Joe Pavelski is a free agent. So is Joe Thornton. Joonas Donskoi will also be a UFA, and Timo Meier–fresh off what looks to be a career season–is going to be RFA.

The Sharks may be secretly hoping Thornton retires, and maybe a Cup win assures that. Without him, it could still be a trick, as even at Pavelski’s age he’s due a raise from $6M a year. Meier’s raise will be huge. Donskoi’s slightly less. And then you figure Karlsson is looking at Doughty money of $11M or $12M a year. It can be done, but it’s going to be a squeeze.

If there’s a bidding war for EK, it’s hard to figure what kind of years will be acceptable. He will be 29 when he hits the market. His skating doesn’t figure to deteriorate at a rate that will make him a problem for a while, because it’s so far above the mean. But how much can he lose before he can’t dominate? Another team can’t ask him to do everything, but not every team comes with a Vlasic to keep him shielded either. He’s going to want the boat of seven years, but like anything else the last three years of such a deal would be ugly.

Then again, no one else does what he can do.

Could the Hawks swing it? Maybe, though convincing him to come to a team that hasn’t made the playoffs in two seasons will take quite the presentation. They could ask Keith and Murphy to simply be the human shield, but neither has proven at this point in time they can handle that level of competition. Could Jokiharju and Murphy do it? The Hawks will have what they hope is Baby Karlsson in Adam Boqvist, so who better to show him the way?

If the Hawks are looking for a quick turnaround though, he makes that far more possible than Artemi Panarin. Maybe you just do it and figure out the rest later.