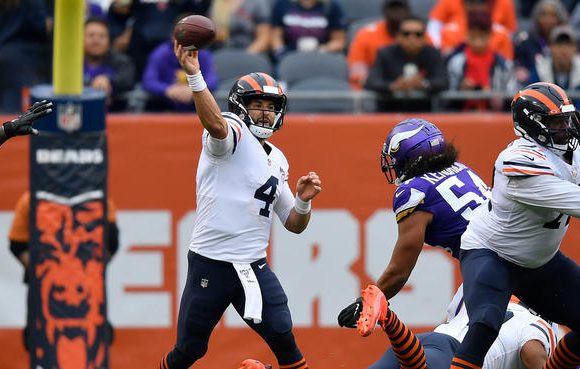 What surprised you more? How well Chase Daniel played, or, how bad the Minnesota Vikings are?

The answer to the first question is obvious. Chase Daniel is a serviceable NFL backup who a.) knows his own limitations, b.) plays within himself, and c.) excels in a system that favors a quick hitting, short yardage passing game over a five- or seven-step drop progression driven scheme that looks for the big play. Daniel finished his day 22-30 for 195 and one TD. Of the eight incompletions, there were four drops, which obviously makes his accuracy all the more impressive. To step in cold and operate the offense arguably better than the starter is a tribute to Daniel’s practice habits and knowledge of the offensive system. Given the investment the organization has in Mitch Trubisky, I don’t envision a quarterback controversy. However, it seems pretty clear that Matt Nagy trusts Daniel and feels more than comfortable with him running the offense.

The answer to the second part of the question above is far more difficult to answer. The Vikings prized run-game finished with 40 yards on 16 carries while the NFL’s leading rusher Dalvin Cook accounted for 35 of those yards on 14 carries. The Bears knew Kirk Cousins wasn’t going to beat them, so they tee’d off on stopping the run and did just that. Cousins finished the game with a respectable 27/36 for 233 yards. These numbers are actually more impressive than they looked as Cosuins was dodging a legit Bears pass rush all day. Cousins was sacked six times and was under intense pressure on almost every five-step drop he took. The Vikings defense yielded only 269 total yards, which wins most Sundays – except when you are going up against the generationally talented defense that is the Bears outfit.

The one player who will benefit more than anyone else by having Daniel under center is Javon Wims. Wims grabbed four balls on five targets, including the Bears longest pass play of the season, a 37-yard connection down the right sideline. Daniel and Wims developed their familiarity with each other by taking second team reps in practice as well as running some scout team offense together. A potential Wims emergence would be extremely valuable to an offense that is struggling to find a #2 receiver behind Allen Robinson.

This brings to mind my weekly mention of Anthony Miller. Miller had two catches on Sunday for 11 yards. – this is same number of catches that the ghost of Adam Shaheen had. I am at a loss when trying to figure out why Miller continues to be a non-factor in this offense. Could we have been wrong about him and his potential? Is he still not healthy? I don’t know these answers, but if Miller continues to disappear, this offense will not be able to sustain any sort of consistency.

Speaking of consistency, for the 4th time in as many games, the run game was atrocious. Nagy made a concerted effort to get David Montgomery the rock. However, 21 touches for 53 yards with a long of seven yards are not what we are looking for from a lead back. I respect and endorse a commitment to the run, but with this O-Line, I’m sure we are not going to see Montgomery in the conversation for Rookie of the Year.

While Montgomery struggled, Tarik Cohen made the most of his seven total touches, highlighted by a 10-yard catch and run for a touchdown. Cohen had a chance for a huge day, but bobbled a perfectly thrown Chase Daniel throw down the sideline which would have resulted in a huge gain and more points on the board.

We are getting force fed Cordarrelle Patterson in the run game. I get it, it’s Matt Nagy being cute. But it continues to produce absolutely nothing. Patterson is a return specialist at this point in his career, except he’s not that good in that phase anymore. Tarik Cohen needs to be taking the backfield reps that Patterson is currently getting, and if that doesn’t happen, getting Anthony Miller more involved this way is an option that needs to be explored.

Next week, the Bears take to the pitch of Tottenham Hotspur Stadium to face the Oakland/Los Angeles/Las Vegas Raiders. There is no reason we can’t expect more of the same from the Bears defense, but what will we see from Chase Daniel, who will be working with the 1’s all week in practice. Another strong Daniel outing and Chicago may just have a QB controversy on their hands.