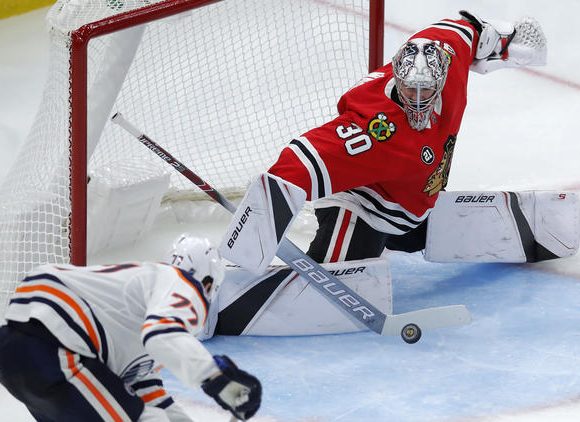 You would be hard pressed to find a sleepier affair that tonight’s contest. Yes, both teams played yesterday, and that always leaves you prone to a less than tip top affair. If this is where you want to make an argument that the NHL should take a page from the NBA and expand their calendar to lessen the amount of back-to-backs and three-in-fours, you’d have a pretty big piece of evidence right here. Neither the Oilers or the Hawks were on the top of their games, or even in hailing distance of said. It’ll be summed up as a goalie battle, but neither Cam And Magic Talbot And Yet Another Cam Ward were asked to perform any miracles in net. This one just came and went. The Hawks didn’t get the bonus point after this one predictably and haphazardly meandered to overtime. Hopefully it won’t matter in the long run.

Let’s get through it.

-There isn’t much to conclude from this one. It started off encouragingly, before the puck even dropped, as Joel Quenneville scratched Jan Rutta and Chris Kunitz. Both have been basically terrible all season, and Rutta was particularly offensive last night in St. Louis. This sets the table for Gustav Forsling and eventually Connor Murphy to punt Rutta down to Rockford (no one’s taking him on waivers), and I can only wait for that day with bated breath.

-This one was such a snooze, there isn’t a lot to draw from it. The one thing I think is worth mentioning is that Jonathan Toews was matched with Connor McDavid all night, and he had Run CMD in his pocket (ignore the OT goal because 3-on-3 is a joke). Toews went for a 65% CF% against McDavid, and that simply doesn’t happen. We’re not far removed from Toews being unable to keep up with the newest crop of stars, and tonight he stared down perhaps the best one there is. That bodes well for the future when Toews has to see Mark Scheifele, Ryan Johansen, and Tyler Seguin on the reg.

-But other than that, the Hawks seemed pretty wary of leaving too much room for the Oilers, or at least the Oilers top six all night. We saw what happened with the Lightning, and though the Oilers couldn’t get to where the Bolts are in a $50 Uber, they contain some serious speed and skill in spots. Defensemen were afraid to pinch too much, they were always ready to get back to their own zone, and it affected some of their attacking play.

-It’s kind of amazing when you see it live how much Milan Lucic sucks.

-I’ve had enough with the drop pass on the entry on the power play. I get it at times. But when a penalty killer is lagging behind waiting for said drop pass, and the Hawks are staring at a 4-on-3 entry at the blue line, then just fucking take it. That’s what you want. There’s more space. If you can’t find your way into the zone with three killers back, then there’s nothing to be done.

-I’m not sure how Brandon Saad missed the net on that chance in the second, but it seemed harder to do than hitting the target.

-Andreas Martinsen had a 0.0 CF% tonight. That’s not easy to do, even in eight minutes.

-Nick Schmaltz and that third line continues to get less than 10 minutes of ES time, and I don’t know why that should be when Schmaltz is probably your second most creative player out there.

-Henri Jokiharju led the Hawks in ES ice time, and that’s after a rough night in St. Louis. I think we know where Q’s heart is.

-Not much else to add.