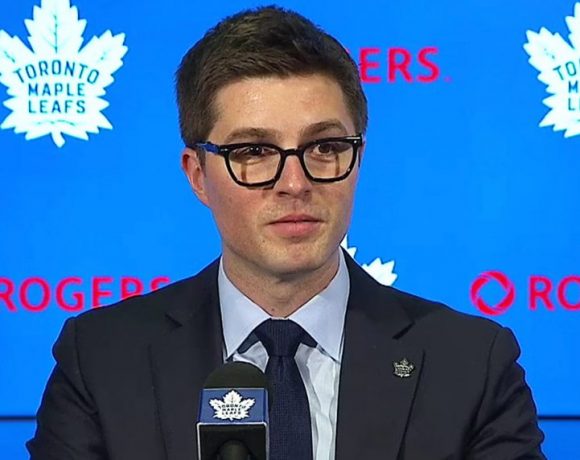 It didn’t take much this summer for the hockey media to become completely agog that new GM Kyle Dubas was able to do, stick with me here, MATH to find a way to fit John Tavares into the Maple Leafs’ salary cap. That he was able to use the considerable wealth of the Leafs–y’know, the one in the biggest hockey market there is–to push a good portion into signing bonus and drop the cap hit to a more manageable $11 million per year, when Tavares could have taken up more space. It hasn’t helped them sign Michael Nylander yet, but clearly he’s just a greedy European who hates Canada and hockey and really society altogether, if the Toronto media is to be believed.

Normally, and we’ve said this before, we would want someone like Dubas to succeed. The NHL needs more minds from a different place than “played the game.” It needs more and better ideas than “hard to play against.” It needs to catch up in how the game is analyzed and how teams are built, and if you need more of a clue as to why, then check out Dubas’s predecessor immediately taking the trash off Dubas’s hands with Lou Lamiorello acquiring Matt Martin and Leo Komarov for the Islanders.

Though Dubas has been with the Leafs for a few seasons now, this is the first time he’s had any influence over their decisions. Make no mistake, he was kept in a dark room with a tennis ball to entertain himself while Lou made the calls. Which is how you end up with Martin and Komarov in the first place. And Roman Polak continually being a pothole on the defense.

But we’ll never get past Dubas’s history with the Soo Greyhounds, and his simply abhorrent and disgusting handling of rape charges against three of his players (one of which was Nick Cousins). Moreover, he’s never been asked about this by the very grunt-y Toronto media, who assuredly would rather stick their head in the sand than have to talk about anything other than why this is the year that Freddy Andersen finally gets it, only to toss him in front of several buses when he pukes it up again.

A refresher: when three of Dubas’s players were charged with rape, they were put kept away from training camp for “… attending a “confidential behavioural wellness program” because they need help dealing “with the stress associated with the charges,” according to Greyhounds GM Kyle Dubas. Despite the severity of the charges, the team has not suspended them.

Another choice quote: “We just wanted to handle things the best we could. We supported the players as best we could with what they needed off the ice.”

“The people running the (confidential) program are going to give us the nod of approval when they feel all three young men are ready to be reintegrated back into the team,” said Dubas on Sept. 4. “They’ll give us the approval on it when they believe the boys are ready… Hockey is not the priority for them right now.”

Let’s cap it off: “The scars remain for all of the people involved. But unfortunately there’s nothing we can do about that.”

No, there is something Dubas could do, and that’s at some point, any point, to admit he got this one wrong. Let’s even back up from that. Someone, ANYONE, could ask him about it what with the changes we’ve seen in our culture in just the past year.

Would he put the players’ “stress” at the top of his priorities again? Would he make their “pain” out to be just as bad as the alleged victim’s?

Don’t worry, no one’s ever going to ask. And until someone does, and until he answers, Dubas is part of hockey’s ongoing and simply unacceptable problem with sexual assault.