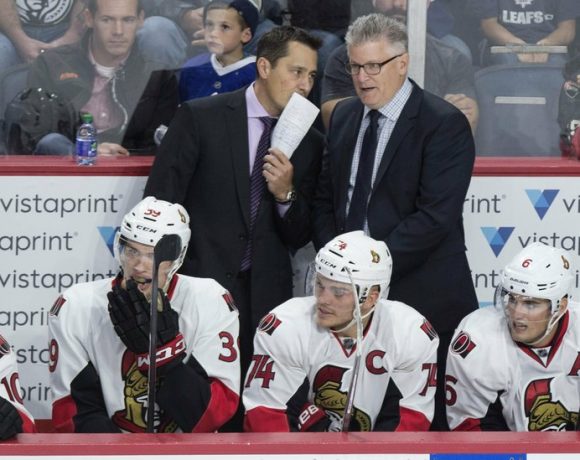 We knew the Hawks wanted to get a veteran behind the bench along with Jeremy Colliton, to provide something of a sounding-board or sort of Obi Wan character for their young padawan of a head coach. That’s why whatever life form Barry Smith was around for a while, fielding questions from Eddie and Pat as all three plotted to kill each other. For comedy’s sake, it was utter gold. Anyway, since Smith left and whichever Granato they had that didn’t play in the NHL moved on to wherever Granatos go, the Hawks have had a vacancy for an assistant.

They filled it with Marc Crawford…which…is…a move. Crawford was an assistant for Guy Boucher the past couple seasons, Boucher himself another fancied young genius who couldn’t actually manage a piss-up in a brewery unless his goalie in tossing a .935 at the world. Crawford took over for Boucher when the latter got shitcanned, and did about as well as one could with that Senators team at the end of a lost season with a 7-10-1 record.

Crawford certainly has been around a long time. But like a lot of ghouls and spirits that hang around NHL benches and front offices, one has to ask why. Yes, he won that Cup in 1996 with the Avalanche. Look at that fucking roster. As McClure if often fond of saying, “A cold glass of orange juice probably gets it to a conference final at worst.”

Since then, no Crawford team won a playoff series and his last four years as a coach saw his teams miss the playoffs altogether. In fact, his crowning achievement of the past 20 years really was that final-day puke-a-thon from the Stars that let the Hawks slip into the playoffs when he couldn’t hump that team past a dead-in-the-water Wild team. Can’t wait to hear the advice he has to impart on Colliton!

I guess, if I squint, right after he left the Canucks they had their best run, so may he helped lay down the tracks. And then the Kings became a perennial playoff team after he left, so maybe same thing. So hey great, the Hawks will be good after he leaves. Whenever that is.

The fear is that if Colliton becomes (or continues, depending on your point of view) a complete balls-up this season, then it’s going to be obvious who is replacement is. And you wonder how long before veteran players start looking that way. And if Crawford takes over, well then you’re proper fucked anyway.

But hey, he’s coached in the NHL before. That’s apparently all it took to get this job. Very excited. Really.