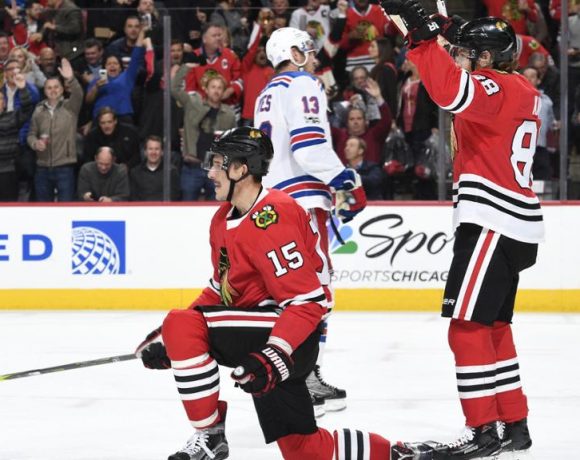 Well that was a bit more fun, wasn’t it? Aside from the Hawks slogging out of the gate like a soon-to-be-shot horse, they put on a display of raw power. To the bullets.

– Maybe “display of raw power” is overstating it, but the Hawks dominated possession for all of the 2nd and about 80% of the 3rd. They ended with a 53% share after the Baconator fart 1st, in which they posted a pathetic 32+ CF%. And it’s hard to argue against 43 shots. Any time Ondrej Pavelec seems like a better option is a good time.

– A good portion of that possession can be pinned on Patrick Kane playing like a $10.5 million player. It all started with that reach-back, through the legs backhander off the crossbar, which is the kind of thing first crushes are made of. From there, Kane proceeded to undress just about everyone on the Rangers, and was especially beautiful on Wide Dick Artie’s first goal. More of this will do just fine by all of us.

– And how about Wide Dick Artie? Playing primarily with Kane and Schmaltz has done his body of work good. The first two goals were the types of stereotypical dirty goals your mother warned you about, and the hattie from Schmaltz was a sight to behold, mostly on the part of Schmaltz, who found the perfect spot on Anisimov’s stick for the tip in.

– Anisimov also scored the PP goal, which was a clinic in how to move the puck on the PP. After winning the faceoff to Kane, Kane tapped to Seabs, who found Schmaltz on the lower left boards, who cycled it to Anisimov below the goal line, then out to Franson for a quick wrister that Artie cleaned up. One of the passing analytics gurus, Ryan Stimson, always talks about the importance of setting up plays from below the goal line, and that was a case study in how to do it.

– While it was nice to see Franson contribute two assists, he spent most of the game skating around like he was trying to hide an erection. His unforced turnover on the PP in the 1st period was so egregious that Rutta ended up on the PP point for a while. I get that Q wants Franson on the PP, but the past couple of games have shown why he was brought in on a tryout. But it’s not like the Hawks have many other options, since Murphy has found a home on the left side it seems.

– Over the past few games, Rutta has looked a step behind everyone else. He somehow managed to be the worse D-man between him and Forsling, which, to this point, was difficult to do. That he ended up with a 51+ CF% is a small miracle, given his 18 CF% in the 1st period. As much as I want him to turn into a surprise Top 4 guy, the past couple of games haven’t been encouraging. And since Q seems married to Franson out there, it might not be a bad time to flip Rutta out for Kempný in the next one, though that will no doubt cause all sorts of fuckery with the pairings.

– Credit where it’s due: Forsling saved the game tonight. His stick save on Desharnais after Rutta turned the puck over and then got horsed, and Crawford got caught down kept the Hawks from blowing their second three-goal lead in a row. Though the numbers don’t entirely flesh it out, Forsling had himself a pretty good game after a woeful 1st period, which saw him with a 9 CF%. They don’t make video packages on NBC for nothing, right? (They often do.)

– Not to fart in anyone’s soufflé, but Toews was one of only three Hawks to be below 50% in shot shares at evens (with Wingels and Panik). Yes, he scored, but it was an empty netter. It’s just one game of course, and he’s got a strong 54+ CF% on the year, but he looked to be fighting it tonight.

– Crawford wasn’t pristine, but he was good when he had to be after his rough go on Sunday. Sure, he’d like to have that third goal back, but the other two goals can be pinned more on Rutta than him (or you can just give Kreider, Zibanejad, and Captain Stairwell the credit they probably deserve).

– Kitten Mittons on the 3rd line is still stupid. That softie he squeaked by Lundqvist was hilarious.

There’s still some wonkiness out there, but the Hawks look like they’ve found some offense. If they can get Toews, Kane, and Saad on the goal side of the score sheet, all the doom and gloom could be a distant memory in a few weeks.

Beer Du Jour: My cat spilled my High Life, so I went and got a Baconator.  Same shits, different way.

Line of the Night: “Ryan McDonagh has been a Tower of Power tonight.” –Pierre, the only man who can simultaneously be naïve and a pervert.