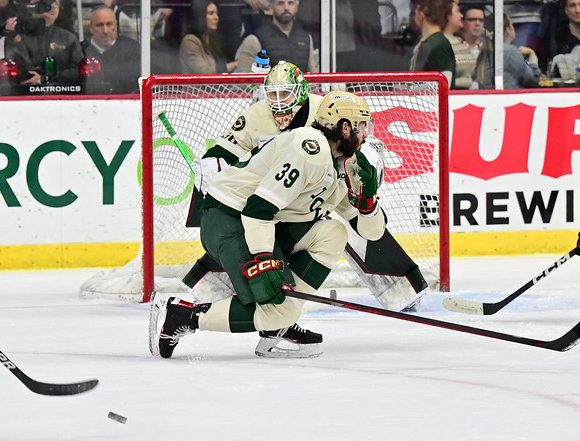 High On The Hog: Holiday Gauntlet

The Rockford IceHogs are in a tie for third place entering the last two weeks of December. The 14-8-1-2 piglets won two of three games this past week and have the opportunity to climb up the Central Division ladder to close out the calendar year.

To do that, however, they’ll have to tame the hottest team in the AHL. That would be the Texas Stars, who have won nine of its last ten contests.

Texas has yet to be defeated in December. The Stars have won their last seven games to rocket to the top of the Central wit 36 points. Milwaukee (32 points), Manitoba (31 points), and Rockford (31 points) are all bunched up and chasing their Lone Star rivals.

The IceHogs visit Cedar Park Tuesday and Wednesday this week. Rockford has two wins in three previous games with the Stars this season, the last being a 7-2 shellacking of Texas at the BMO Center on November 23. The Stars have gone 9-1 since that loss.

Texas has performed well. However, in its last five wins, three were against Chicago, who inhabits the division basement. The Stars then swept a weekend series in Iowa, where Rockford defeated the Wild 7-4 on Tuesday night.

The formula for Texas has been to get control of games early. The Stars are 11-0 when leading after the first period. Rockford has been able to overcome first-period deficits, having gone 7-4 in such situations this season. Games in this rivalry are usually fast paced and usually hinge on who has control of the puck.

Sweeping the Stars would put the IceHogs right behind Texas in the standings. Rockford finishes December with three games against the Wolves along with one verses Grand Rapids. The schedule is favorable for a contending club to finish the month strong. It will be up to the IceHogs to take advantage.

Sunday, the IceHogs recalled D Cliff Watson, along with F Kale Howarth. Watson has been shuttled between Rockford and the Indy Fuel several times this season. For Howarth, this is his first recall after scoring six goals in 14 games with Indy. Last year, he took part in 12 games for the Hogs, with two goals and an assist.

Rockford captain Garrett Mitchell returned to the lineup on Saturday night, which saw the IceHogs beat Hartford 3-2 at the BMO. Mitchell had been out since November 16, when he injured his left shoulder against the end boards of Allstate Arena in a game against the Wolves.

Filip Roos, sent to Rockford by the Blackhawks a week ago, has made an immediate impact on the ice. He picked up his first AHL goal in the win over Iowa on Tuesday, then potted the game-winner Saturday against Hartford.

The Week That Was (Readers Digest Version)

Friday, the Toronto Marlies broke open a 2-2 game with two goals 31 seconds apart in the middle of the third period. The Hogs battled back and got a Brett Seney goal late, but couldn’t complete the comeback.

Saturday’s 3-2 triumph over the Wolf Pack saw D.J. Busdeker secure his first goal of the season as part of a three-goal second period. Michal Teply got his fifth of the season less than a minute later. After Hartford tied the game, Roos drove to the net and shelfed his attempt. That was enough for the Hogs to hold on, aided by 38 saves from Dylan Wells.

After the trip to Texas Tuesday and Wednesday, Rockford will journey to Rosemont for a Friday renewal of the I-90 rivalry with the Wolves. 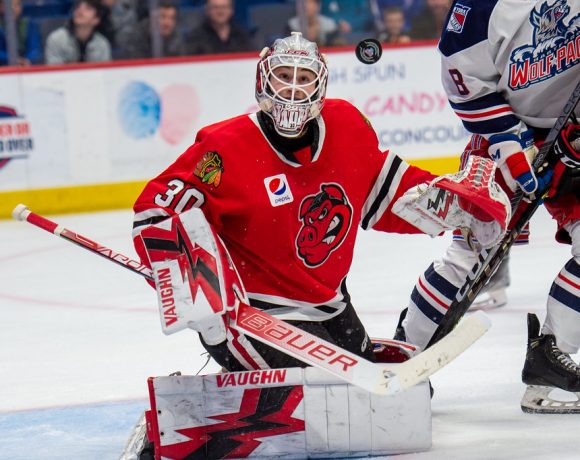 High On The Hog: You Just Have To Stop Enough

With goalie injuries continuing to plague the Chicago Blackhawks, it appears likely that their AHL affiliate, the Rockford IceHogs, will feel the pinch on their roster for another couple of weeks. The organization is stretched thin and has been for a good portion of the 2022-23 campaign.

Fortunately, the goalies stepped up for the Hogs this weekend.

Rockford beat Springfield and Hartford to sweep a two-game eastern jaunt, getting solid play out of Dylan Wells Friday in Springfield and an outstanding performance from Jaxson Stauber against the Wolf Pack Saturday. Each gave up two goals in their starts, which is certainly good enough to make the IceHogs a very competitive team.

Stauber’s performance against a struggling Hartford team doesn’t scream “goalie win” upon a look at the box score. The Wolf Pack is the worst offensive team in the AHL even before their leading scorer, Jonny Brodzinski, was recalled by the Rangers on Saturday morning.

But it was. You had to have been there for full appreciation. In this case, it was from BMO South, watching from my basement.

Stauber was solid in the first two periods, stopping all 15 shots he faced as Rockford built a two-goal lead. Once the Hogs went up 3-0, they stopped defending and allowed Hartford full access to the crease. Stauber had another 15 shots to face, most of them of the high-danger variety and right on his doorstep.

When the smoke cleared, the Hogs rookie had surrendered two goals. The first was a three-man unencumbered rush down the ice by the Wolf Pack, just after Stauber had denied a two-man rush. The second came on a Brandon Scanlin blast in the final seconds after Rockford just left a loose puck dangling in front of their goalie.

Stauber’s 28-save night was the best performance by an IceHogs goalie this season, in terms of allowing his team to win a game that could easily have slipped away. Wells also was an asset Friday; his workload was not as heavy, but he made the key stops.

If Rockford is going to allow opponents to close the gap on its net, the goalies have to limit the damage, much like Arvid Soderblom was able to do last season in similar circumstances. Of course, Soderblom is now with the Blackhawks, as is Stauber, who was recalled on Sunday. Rockford’s opening-day goalie tandem is now Chicago’s goalie tandem for the moment.

Even average goaltending would be a boon to the IceHogs over the next couple of months. This weekend was a good example of solid play in net making Rockford a tough opponent for the other teams in the Central Division.

Cole Guttman continues to impress since returning from an October 15 concussion that kept him out of action for nearly a month. Guttman (5 G, 5 A) had goals in both games on the way to a three-point weekend. In five games over the last two weeks, he has four goals and three helpers.

Around The Net, Just Not In It

Mike Hardman (1 G, 8 A)has had his share of opportunities, but his last lighting of the lamp occurred on October 29 against Belleville. His goal drought hit ten games this weekend.

Josiah Slavin has played in all 19 of Rockford’s games this season, but is still looking for his first goal of the season. Slavin has been in a fourth-line checking role for much of the campaign. He did not register a shot this weekend; his opportunities have not been few and far between on the offensive end.

Another player looking to find the twine for the first time is rookie Louis Crevier, who has been been a steady third-pairing defenseman in the Hogs lineup. Crevier is sans points in his last nine games.

D. J. Busdeker missed the entire month of November and made his return this weekend. He skated in both games for the IceHogs without registering a point. Like Slavin, Busdeker has been cast in a more defensive role so far.

Lukas Reichel put the Hogs ahead 1-0 with his ninth goal of the season. The power-play goal came late on a Matthew Kessel interference call and was set up by Dylan Sikura and Brett Seney. Reichel took a one-timer from the top of the right circle to beat Thunderbirds goalie Joel Hofer at 10:51 of the opening frame.

Early in the second, Cole Guttman won control of the puck behind the Springfield net. He managed to thread a pass to a waiting Buddy Robinson in the slot for a 2-0 Rockford advantage at the 4:54 mark.

Springfield closed the gap to 2-1 on a Greg Printz goal with 4:58 remaining in the second period. A couple of minutes later, however, the IceHogs struck power-play gold once again. Guttman took a pass from Reichel across the goal mouth and snuck it past Hofel with 2:17 to play in the period.

Springfield rallied for a goal with 1:17 left when Hogs goalie Dylan Wells left a rebound in front of the net. Nikita Alexandrov nudged the puck across the goal line, cutting Rockford’s lead to 3-2 at the second intermission.

Just 39 seconds into the third, David Gust took a pass from Brett Seney and skated to the right post. He centered to Luke Philp, who beat Hofel from the front of the net to make it 4-2 Hogs.

A Thunderbirds goal midway through the final frame was waved off on an offside call. Springfield had ample opportunity to get back into the game, but the IceHogs stopped them seven times on seven tries on the man advantage. Wells made a number of big stops among his 23 saves to pick up the win.

Dylan Sikura made Hartford goalie Louis Domingue pay dearly for misplaying a Lukas Reichel dump-in behind his own net. The puck slid in front of the Wolf Pack net, where Sikura poked it into the cage 14:03 into the contest for a 1-0 Hogs advantage.

Rockford doubled that lead 6:14 into the second period. The scoring play started with Sikura skating behind the Hartford net and sending a pass to Adam Clendening along the boards, just inside the blue line. Clendening sent a long, cross-ice pass toward the right dot, where Cole Guttman sent a one-timer into the top corner of the net.

Early in the third, Lukas Reichel drove to the left post with the puck. He was denied by Domingue, but stayed with the play, taking the rebound around the Wolf Pack net and banking home the goal off of Domingue’s pads. Rockford went up 3-0 1:58 into the third period.

The Hogs soon had a power play to potentially go up four goals, but Hartford had other plans. Rockford turned over the puck with seconds remaining on the man advantage, leading to a Bobby Trevigno goal at 6:06 of the third.

The last ten minutes were an adventure, as Hartford pushed hard and threw 15 shots to the net. Stauber stopped 13 of those shots, many of which were open looks on Rockford turnovers. Brandon Scanlin got the Wolf Pack to within a goal with five seconds left with a blast from the slot, but the Hogs survived to post their second-strait win.

Back To The Central Division

Rockford has a three-game home stand this week, starting Wednesday night with Milwaukee. The piglets host Iowa for back-to-back games on Friday and Saturday.