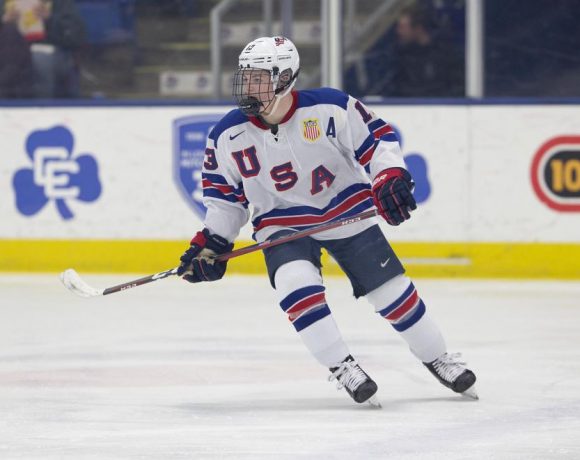 The FFUD #3 pick preview keeps rolling on, and today we’ll look at one who would be a true stretch but also might put up the best numbers of anyone.

Goals. The name of the game is still scoring goals, and if you’re going to have a one-dimensional player, as long as that dimension is scoring the fuck out of the thing, then that’s ok. And Caufield is the best pure scorer in the draft. That’s clear, no one is disputing that. 72 goals in 64 games, even at that level, is enough for anyone to take notice. He’s also dominated at international level for his age group, with 14 goals in seven games at the U-18s. The release is already making people think of Ovechkin and MacKinnon, He’s not the skater that MacKinnon is but he’s hardly a plug on his feet and is more than fast and smart enough to get to the open spaces to get off that shot. The hands are there too, so the thought is that his playmaking could improve, whereas this year he had Jack Hughes to do all that and all he had to do was finish. Some would say getting to play with Hughes inflates the numbers, as if you could complain about 72 goals, but as we learned with DeBrincat you still gotta finish those chances and Caufield does it at what could be called a generational level.

One, he’s a stretch. Even as he’s climbed up the boards as people ignore his size, he tops out as the fifth-highest rated prospect and lower on other boards. You’d be passing on what look to be better players to take him, unless you trade down and that would mean getting something tangible for the #3 pick. And the Hawks aren’t going to trade the #3 pick. If he’s your guy he’s your guy, though.

This is where I’m supposed to say size. No, the Hawks have shown they don’t really care about that if the talent is there, and hopefully they stick with that, but the Hawks are starting to specialize in small, nippy forwards and eventually you do have to have someone at least average-sized somewhere. Even if Caufield were in the NHL in ’20-’21 (which seems likely), there’s just about only one spot he can play and that’s across from Kane, and boy would that line be fun, in the good way offensively and the bad way defensively.

Third, the Hawks need a top-pairing d-man and they probably need someone to carry on from Jonathan Toews in two to three years, and Caufield isn’t either of those. The Hawks do have a chance to get either of those at #3, and while Caufield has a special skill you can’t really teach, wingers just don’t move the needle or change directions of teams as much or as often.

To call Caufield “a risk” is wide of the mark. The dude is going to score, and he’s going to score a ton. As soon as he arrives with whatever teams gets him, he’s going to fill the net and there will be a ton of articles about the teams that passed on him, simply because of that one stat. But it is THE stat. That said, at #3 and what the Hawks have a chance to get, it seems too much of a stretch. You can never have too many guys who can score 40, and Caufield probably gets to that before too long. But he just isn’t as dynamic as Byram or Turcotte.

Now if you get a bonkers package for the #3 pick and somehow end up at #5-8 where Caufield might go…then we’re talking…but that’s not going to happen.