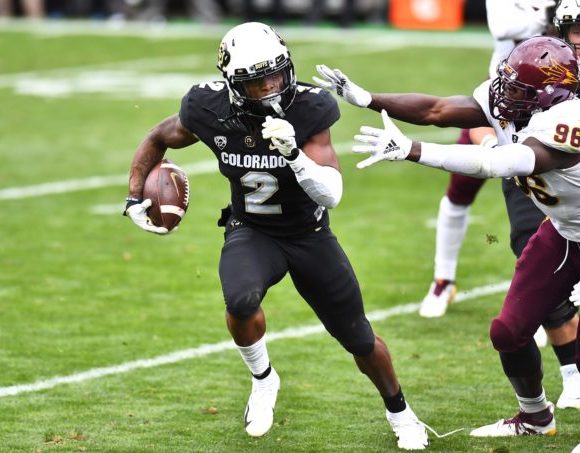 On the Clock Part 2: Drafting Offense

Welcome back to our short series to hopefully get you a little more fired up for the draft that takes place in two short weeks, but let’s be real: anything that falls under live sports is just going to kill it since we’re all dying for something that isn’t a rerun. I’ll gladly take watching Mel Kiper talking over college football highlights instead of rewatching The Town for the tenth time in April.

Today we’ll be looking at some of the players that I’ve seen mocked to the Bears should they happen to stand pat and select players at picks 43 and 50.

The case for going after someone on the offensive line is painfully obvious to anyone who watched the Bears play offense last year. Protection was inconsistent and the run blocking was spotty at best. With the retirement of Kyle Long, the Bears need to shore up the inside of their line and hope the outside of the line continues to progress. Below you’ll find short scouting reports on two players the Bears could be looking at if they are still available in the second round.

Lloyd Cushenberry: IOL, LSU
I’ve seen Cushenberry mocked to the Bears, admittedly a lot less recently than initially. Throughout this process it looks like his stock has dropped a little bit after a superb week of workouts at the Senior Bowl lifted his stock to right around where the Bears pick. It looks like he will be there when the Bears pick in the second round, and while he has been touted as an almost immediate starter, there will undoubtedly be people wondering if Guard could be better filled between Alex Bars and Germain Ifedi while the Bears make a sexier pick here.

Caesar Ruiz: C, Michigan
Ruiz presents a similar upside if picked by the Bears as Cushenberry, however Ruiz is unquestionably the best interior offensive lineman in the draft this year. Bears fans might be bored by the pick, but watching any of his highlights will shut their stupid mouths quickly. His tape is dominant and it’s quick to see why he’s the most heralded prospect of the bunch. He would fit perfectly in Matt Nagy’s offense, since he has the speed and strength to peel off combo blocks and get to the second level on runs out of Nagy’s preferred read option look. The real question is if Ruiz will still be there at 43, given that he is being mocked anywhere from there on the low end all the way up to picks in the mid 20s.

The 2020 wide receiver class is so stupid stacked with talent that it could go down as one of the best classes in NFL history. Since the Bears won’t have a crack at any of those top prospects, they could be looking at a wide receiver that isn’t the total package yet and needs a bit of time to develop. This is unfortunate when you look at how slow Javon Wims and Riley Ridley are coming along, but if the Bears added any of the following players I think the offense would instantly improve drastically. However, be advised that all of these players have also been previously mocked to any and all of the Bears division opponents.

Brandon Aiyuk: Arizona State
Aiyuk brings the speed and ability to go over the top that Taylor Gabriel brought the Bears when healthy, but while Gabriel was 5’7” and 168, Aiyuk is 6’0” and 205. Watch his highlight video and get excited. Aiyuk has tremendous breakaway speed and can take any route to the house. He causes separation that just can’t be coached or schemed, and on his highlight package there’s a double move he puts on an Oregon DB that made me laugh out loud.

Jaylen Reagor: TCU
Apparently Jaylen Reagor can squat 620 pounds, which is absolutely bonkers, but watching his tape shows someone who looks much faster than his combine 4.47 40 yard dash (and instead more like his preposterous 4.22 hand-timed 40 at TCU’s recent pro day). His pro comps are Stefon Diggs and Percy Harvin according to The Ringer, but unlike Harvin his tape is filled with him making high-point catches that you wouldn’t expect a 5’11” guy to make. He might make a better outside WR and therefore a better fit for the offense, but who knows if he can still win those jump balls against CBs that are 2-4 inches taller than him. As an added bonus, he runs the reverse so well it reminded me of early Randy Moss, back in those Vikings days when you held your breath every time he touched the ball.

Laviska Shenault Jr: Colorado
I had no idea who this dude was until draft season, but if there’s someone with better tape out there I haven’t seen it yet. I love this dude’s tape and will be a sucker and probably draft him in fantasy, which might actually be me putting a curse on him. Shenault is all over the field, bodying out DBs on slant routes, making contested catches in traffic, and also running the Wildcat with crazy success. Basically, he looks like Cordarrelle Patterson. He breaks away with a beautiful second gear, and if he does get caught, well, he led all draft eligible receivers with 46 broken tackles in the last two years. Most of the scouting reports I’ve seen on Shenault mention his lack of polish as a proper WR and how he will need an innovative offensive mind to get him involved, and maybe that makes Chicago an optimal fit for him.

Michael Pittman: USC
Most scouts don’t expect Pittman to be around when the Bears pick, which would be a shame because damn, he is so polished. When watching him play, he looks a lot like Allen Robinson and throughout this draft process he has often drawn comparisons to the Bears’ best offensive player. With that in mind, he is unbelievably talented and blocks as well as he runs routes. He has highlight tapes of him straight up Mossing college DBs, and while he might not fill the Taylor Gabriel/Tyreek Hill burner role in the offense, he is certainly capable of dominating NFL defensive backs. If the Bears got him and had him line up opposite Allen Robinson, I think Anthony Miller makes the Pro Bowl simply because safeties would be so preoccupied with shading towards the outside guys that Miller would feast on single coverage looks or filling the middle seams against Cover 2 or Cover 3 looks.

Is drafting an IOL or WR irresponsible when the Bears defensive secondary is missing half their starters from last year, and 3 of the 5 DBs that were on the field during their phenomenal 2018 season? I guess that’s up to the front office to decide. I have a feeling if the Bears stay at 43 and 50, you could see one of these names in a Bears jersey next season, and that’s not too bad. I think a lot of the signings Pace made in the second wave of free agency were designed to allow him to look at the best player available at almost every slot, so we’ll see! Shit, now I’m excited for draft season all over again. I hope you are too. We’ll be back on Thursday for part 2: the DB Derby.