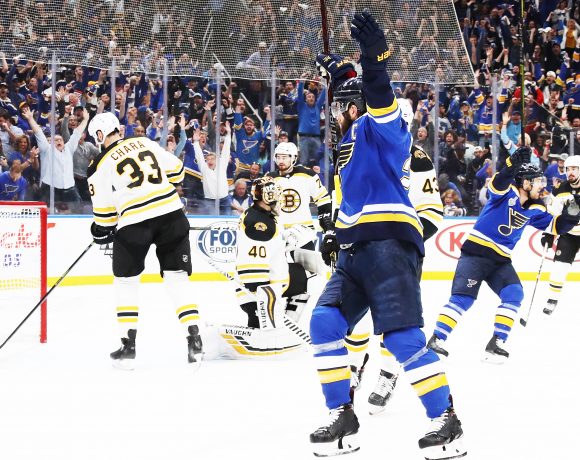 Ok, so remember when the Hawks used to kind of just do enough to win a series? Like, they’d let a road game slip because they already got one to even out home-ice and they just didn’t feel like matching the intensity for six or seven straight games? Like the Nashville series in ’15. Or even the Final in ’15, really. They’d save it for the end. That’s what I want to believe the Bruins are doing. Except they don’t have nearly the pedigree, and might only have enough energy to really give it a go every other game. Which would be enough. Or maybe not. Maybe losing Grzelcyk is a real problem. Maybe this is the same team that did get knocked around a fair amount by the Canes for the last two games but had Tuukka Rask to bail them out, and he’s not playing at that level right now.

Maybe the gods just hate you.

-I don’t know whether hockey coaches outthink themselves, or they and teams just forget, but I can’t for the life of me figure out where the Bruins got the idea that carrying the puck over the offensive blue line every time was going to work or was the more advantageous route. When they’ve been good in this series, they’ve thrown the Blues game right back at them. That is, get the puck deep, get on the still very slow and very dumb and very brick-handed Blues defense, and watch the turnovers ensue. Especially in the second half of last night’s game, I must’ve watched Krug or Marchand or McAvoy try and traipse through three or four Blues and just lose the damn thing. Yes, this worked in Game 1 when the Blues were out of position chasing their own forecheck and the Bruins could enter the zone at odd-mans or at evens all the time. That wasn’t last night. It was too complicated by half.

-I realize Zdeno Chara is a Hall of Famer, and the second best Bruins d-man of all-time. He’s also been a sloth in this series, constantly getting his head churned into margarine by the Blues top line or even their second line. It is just not that big of a deal for the Bruins to be without him, even though McGuire and Olczyk were convinced it was. Yes, being without two d-men now is a problem, but that’s a numbers thing no a name thing. McAvoy’s numbers with John Moore, who everyone hates, were just about the same. And again, though Berube wasn’t really chasing matchups all that much, the fact that he’s happy to have his top line go out there against Chara tells you what you need to know.

-Two pretty choppy rebounds from Rask and that’s basically the difference here, even though the Blues carried the play.

-Boy if Berube ever figured out to play Vince Dunn more than Bouwmeester and Gunnarsson, then we could be in real trouble.

-Grzelcyk is looking a real loss, because at the moment only McAvoy and Krug can get out of trouble and they were off color last night. Maybe Carlo but it’s an awful lot to ask of Clifton. Back at home you can shelter him more and the Bruins will have to.

This is going to be an awfully bumpy ride from here. 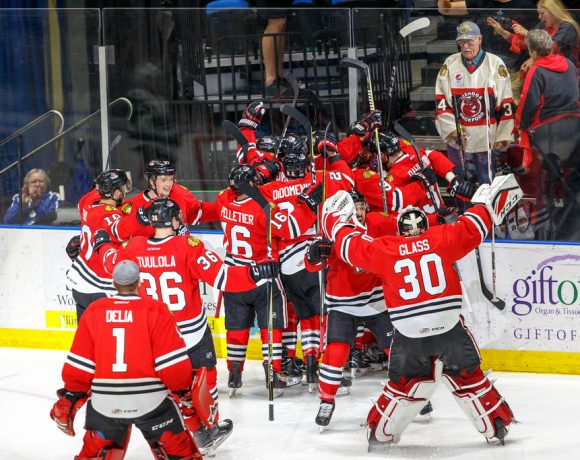 The Rockford IceHogs were able to extend their season a bit longer into the spring Thursday with a 3-2 overtime victory over the Texas Stars. The asterisk can be removed from Game 5 of the Western Conference Final. It is indeed necessary and will be at the BMO Harris Bank Center Friday night.

Safe to say that this will be brief. The season could end at any time for the piglets. Maybe I’m here Monday morning  crowing about a possible comeback to be completed in Texas. Maybe I’m starting to dig a hole to plant the 2017-18 campaign before beginning a season-in-review post. The way the last three games have gone, it could be either angle.

Game 4, like the previous two games in this series with the Stars, came down to extra hockey. Unlike Game 3’s scoreboard orgasm, goals were hard to come by Thursday. Rockford had to rally from a goal down in the third period and needed a good portion of the frame to come up with the equalizer. For the first time in this series, the Hogs were able to manufacture some scoring when it really counted.

Victor Ejdsell gave Rockford the lead 6:24 into the game when his attempt from the slot slipped through the pads of Stars goalie Mike McKenna. Texas tied the game via a two-man advantage in the 16th minute on a bad angle shot by Travis Morin. A late power play tally by Matt Mangene put the IceHogs down 2-1 with 25 seconds left in the second period.

Things looked a bit bleak for Rockford until Luke Johnson was able to re-direct a Cody Franson shot past McKenna with just under seven minutes to go in regulation. In overtime, Ejdsell scored from the right circle after Matthew Highmore gathered in a rebound of his own shot and found the open Swede.

IceHogs win. Cue “Chelsea Dagger”, raise the sticks and get set to try this winning thing again. Here are some additional thoughts on Game 4:

ON THE SKYWAY: Hockey Wilderness

As they did last year, the Hawks find themselves having passed up one chance to strangle the life out of this series in St. Paul but with another to do so in  Game 4. This time, however, they have a spikier Wild team to deal with (one that’s already escaped this dungeon this spring) and not quite the doomsday arsenal they once did.

If we go off yesterday’s practice, it would appear that Joel Quenneville is going to hit the blender again and try and spread out his scoring (or watch Sharp’s and Hossa’s usefulness get completely erased by Michal Handzus getting beaten silly by Granlund, Koivu, or Haula. Take your fucking pick). That’s if you believe this wasn’t just subterfuge. Even if he’s serious about putting Ben Smith up top and Kane with Kruger and Saad, you know it won’t last much more than a period if the Hawks aren’t up 3-0 and we’ll go back to what the lines have been this series anyway.

Finally, the hour is nearly upon us. Approximately 15 minutes after the horn sounded ending Game 3, I was ready for Game 4. I doubt I was hardly alone with that thinking. And so here we are.

We’ve had plenty of time to beat the dead horses that were Game’s 2 and 3 and the narratives have already been decided by the powers that be. The Blackhawks are the President Trophy winning team unable to match the “will” or “intensity” of those pesky Red Wings. Meanwhile, no matter what the stat sheet says from this point forth, the Red Wings have found a way to shut down the Blackhawks vaunted attack. Should the Hawks win, it was just what was supposed to happen all along.