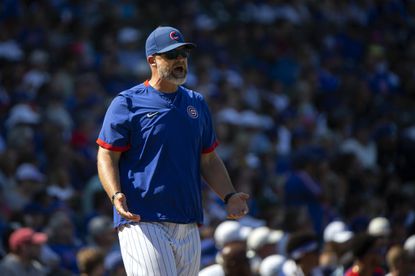 With just a little over a month left in this lost season, the Cubs continue to get crushed offensively as the number of fans that continue to watch these games dwindles. This weekend, the Cubs got outscored 19-5 and there was genuinely not a lot of good to see there. Even Keegan Thompson’s day on the mound on Saturday was a pretty forgettable one. Finally, as the cherry on top of this garbage sandwich, the Cubs are now in the midst of the longest home game losing streak in franchise history with loss number 13 in a row happening last night at Wrigley. Let’s review this dreck.

Despite going up 2-0 early, the Cubs just couldn’t hold on, allowing the Royals to hit five solo homers to win the game 6-2. Zach Davies allowed four of those homers in 6 innings pitched: one in the 4th inning, one in the 5th and two in the 6th. Past the 3rd inning, the Cubs’ offense only had two hits (and one walk) for the rest of the game. When you can’t figure out the Royals’ pitchers, well…that’s not good for you.

Ian Happ’s offensive skills are showing signs of life, sort of, despite it being a bit too little, too late. He and Wisdom were just about the only noticeable hitters, as Wisdom hit a solo homer to put the Cubs ahead in the 2nd, and in the 3rd Happ singled to score Zach Davies (that hit, RBI and run scored likely won’t be happening a year from now.)

The Cubs did no more hitting, as Davies gave up four solo homers despite only allowing one other hit for his six innings played today. However, those solo homers obviously added up especially once the Cubs’ bats went flat. Rex Brothers pitched one hitless inning and then Ryan Meisinger allowed two hits that let the Royals pile on their lead. Jake Jewell gave up a solo homer in the 9th to end things for us in a pretty forgettable game.

Well, Keegan Thompson lost his second career start, but things are pretty much always terrible for the Cubs these days. He obviously seemed a little nervous or jittery for this start, as the first run against him was scored on a wild pitch after allowing two hits in the first two at-bats of the game. Hopefully with a few more starts things will start to calm down in that regard?

Meanwhile, the Cubs offense continues to be almost league-worst. This is best shown through Kris Bubic, a pitcher who allowed 9 hits and 7 runs in 1.1 innings his last start, being able to no-hit this team through six innings. The offense continues to be horrendously broken, but nowadays there are no longer MLB-caliber players who get blamed for it; now it’s just what this team is.

Patrick Wisdom continues to be the only consistent form of Cubs offense as of late with yet another two-run homer to make this game not as embarrassing as it could’ve been. (Frank Schwindel walked.) That was the only hit the Cubs had the entire game, and at this point there’s nothing left to do as fans but shrug and say, what can you do?

The Cubs once again got crushed yesterday, with Ian Happ responsible for the lone Cubs tally today. The Cubs were only able to get 5 hits compared to the Royals’ 16, which means that nobody was surprised to see 9-1 being the final score.

The starting pitching continues to be an absolute disaster, as the bulk of the Royals’ offense came off of starter Alec Mills, who gave up 11 hits and 7 runs in only 4.0 innings pitched. Starts genuinely don’t get much worse than this, despite his five strikeouts. At least he didn’t walk anyone?

Rowan Wick, surprise surprise, was the only relief pitcher who gave up any more runs, which I would consider to be a step in the right direction for everyone else involved. Ryan Meisinger came out in the 5th inning to relieve Mills of his duties. He had runners on second and third and got a strikeout and no hits to lower his ERA to 11.12. He did allow a sacrifice fly that scored a runner but since that runner was put on base by Mills it didn’t count against him. Adrian Sampson, Rex Brothers and Michael Rucker combined for only three hits together in the last three innings of the game. They also got four strikeouts.

The Cubs couldn’t figure out Royals starter Carlos Hernandez, who stayed in the game for seven innings and gave up only four hits. In the 4th inning, Ian Happ hit a ground-rule double and Matt Duffy’s single two batters later was able to send him home. Other than that, Hernandez shut down the club and that continued through the Royals’ two innings of relief, where the Cubs only allowed one hit.

In case you still cared, the Cubs now play the Rockies for the first half of this week. The Rockies are about as bad as the Royals and look how that worked out for the Cubs this weekend. The ugliness continues; if you’re still crazy enough to watch and read about this team, I’ll be back midweek with the wrap. Go Cubs go.